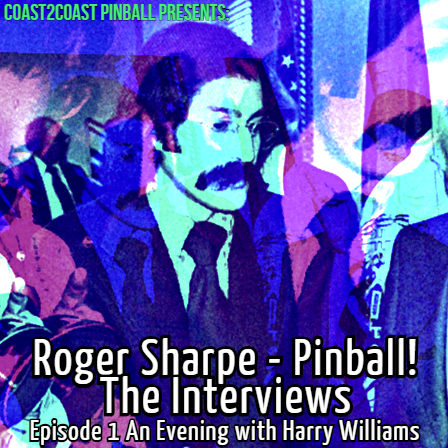 Now that Podcast Garden has gotten its wires fixed, and apparently there are no more SQL errors for now, I can finally link to what you have already heard.

Link to the main project page on Coast 2 Coast Pinball

Nate Shivers’ project with Roger Sharpe is revealed! This first episode with Harry Williams has so much history and substance … and this is just episode one!

An Evening with Harry Williams
In the first episode of the series, Nate Shivers talks to Roger Sharpe about his long unheard interviews with some of the all time greats in the pinball business.

​Roger interviews famed pinball designer and inventor Harry Williams in 1975. They discuss Harry’s long and amazing career working in pinball and the coin-op field. Not to be missed!

In the mid 1970’s, while working on material for his acclaimed book, Pinball!, Roger Sharpe interviewed many of the greatest luminaries in the world of pinball. Now, over 40 years later, we have a chance to hear these rare recordings and discuss them with Roger himself.