Hey, you know what would be awesome?! If the Wheel of Fortune pinball game… 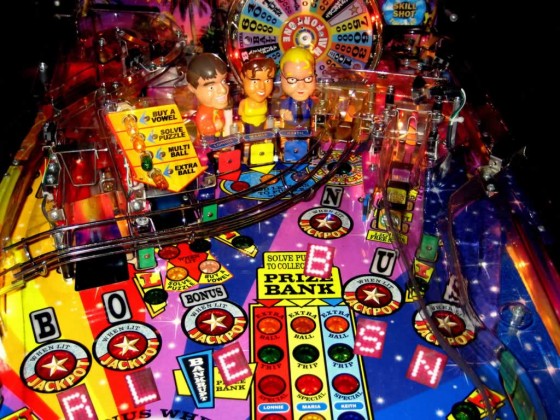 Hey, you know what would be awesome?! If Wheel of Fortune pinball game had LED displays with letters in front of the major shots. Then, you could actually guess at the puzzle by choosing which letter you wanted to try.

After each shot, all of the letters could change to a different set. At the beginning of the game, most (if not all) of the letters could be in the puzzle. However as the game moved along, more incorrect letters could sneak in. You could even have some of the displays with no letters, which would make later puzzles harder to complete.

If you guess two or more letters in a row within a short time, guess what that could be… a COMBO! That’s right! Wow this game is now instantly better.

Also, yes I did put the ‘E’ in that space for the “buy-a-vowel” shot on purpose. See, if you have the money to buy a vowel, there could be a vowel there. If not, then there would be another consonant.

As for the “Spin-the-wheel” shot (where I’ve put the ‘B’ in the picture), if the display is off then you can use that shot to spin the wheel and get a new set of letters. Otherwise you use that shot to guess a letter that’s displayed.

This would have been possible to do, right? I just took the letters from the LED display on World Poker Tour. Having LED letters underneath the playfield has been done before. There even a small LED display on Wheel of Fortune already.

I guess it’s too late for any of that now. Instead, we have a game with so much lost potential, and four lights that don’t do anything. Actually, seven. 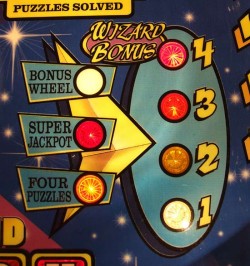