Welcome to my corner of the pinball hobby. Since the transition of the site into a daily content and aggregation format, you will see something posted about pinball on here at least once every day. That will include the latest available pinball media, news, tournaments, podcasts and other activities produced by pinball enthusiasts. You will also see original content created by me and friends of mine in the hobby, such as:

My career is as Rules Designer for deeproot Pinball, a pinball game manufacturer. This site has been covering releases and other information from manufacturers over the years, and will also provide information about deeproot as it is officially released publicly. Opinions expresed by myself or others on the Fun With Bonus web site, and other Fun With Bonus Internet presences, do not represent the opinions of deeproot Pinball. Disclosure will be noted where appropriate.

In my former lives as an administrator of educational technology, and a public school mathematics/computer science teacher, I incorporated aspects of pinball and video games into my lessons to demonstrate to my students how these educational subjects can also be useful and relevant to them outside of school. My Instructional Technology Master’s Degree thesis was also based on ways to use educational gaming to reinforce classroom instruction.

I promote the sport of pinball and its players by highlighting the characteristics of the game that make it fun for all ages. I will continue to encourage pinball’s resurgence through this web site. I strive to make frequent updates about pinball media created by myself and others, as well as information on the events, competitions and the players that make the game of pinball unique and special.

In addition, I have taken part in the organization and operation of pinball events and have provided commentary for pinball competitions on PAPA TV and for other tournaments.

Favorite pinball callout:
“You FOOLS! I told you to use the Atomic Blaster!” –Medieval Madness

First pinball game:
I am not sure exactly which game was my first, but it most likely was Space Shuttle. This game helped me to learn math when I was very young. Although, I remember that my 2-year old self initially found it difficult to understand these two things while playing blackjack: First, why ‘J’, ‘Q’ and ‘K’ were the same as the number 10. Second, why, when I chose double down, that sometimes I would have a whole lot of money, and other times I would lose a crapload. 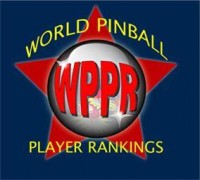 I can pretty much have fun with anything except simulation sports games (sorry Madden, NBA, NHL, and MLB insert number here). I’m always behind the current trends because I will not pay full price just so I can say I had the game “day one”. I’ll get most of of my games as cheaply as I can, and usually in bunches that end up unplayed for a long time. My embarrassing backlog is embarrassing. Mainly because some of the time I would devote to videogames is taken up by arcade pinball competitions and tournaments.

“Fun With Bonus” is what happens when you lose your ball and the pinball game gives you whatever bonus you have earned. However, most pinball games don’t just give you the bonus. Some games will give you some base points, then put a multiplier to it, then add some more points from bonus modes, and then count up the bonus for you with quirky sound effects like it’s some sort of telethon. The game is having fun with your bonus. This is where the pinball jargon “Fun With Bonus” comes from.

“Fun With Bonus” moments happen in video games as well. For example: shmups go through a fun with bonus mode usually at the end of stages to tell how well you did. Players receive mountainous amounts of bonus points after the game calculates the number of medals, combos, and other skillful things they did during the stage. Maybe that is part of the reason why I like shmups even though I am not very good at them.