Some time ago, I made a short series of parody cards fashioned after a card game. Well, I think it’s time that I got my creative spark going again, such as it is. I’ve chucked the old series in favor of a new redesign that I think will be less complicated and more fun.

Each card will still link to a much larger version that you can download. If you shrink the cards down to an official card size (approximately 2.5 inches by 3.5 inches) you can print them out for yourself if you would like.

Since the name of this project has “arcade” incorporated in it, I am going to start off by focusing on arcade and gaming culture. However, I don’t plan to limit myself to just that. Anything that is fun just might show up on a parody card. The first few cards focus on a couple of the more undesirable arcade personalities: the “Arcade Panhandler” and the “Arcade Vulture.” Have you ever encountered one of these specimens? If you have spent a decent amount of time in an arcade, I’ll bet that you have. 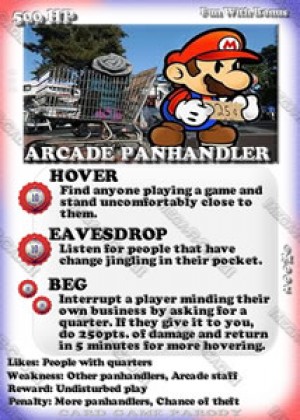