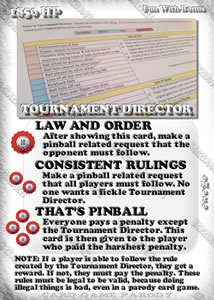 With all of these card games based on just about whatever, I decided to create a parody card set called Mega-R-Cade!! (MAY’-GUH ARE-CAYD’). This is a parody and in no way seeks to infringe upon the copyrights of any card set or anything else. Anyway, it’s just so much fun creating these cards.

Not So Frequently Asked Questions:

And now, as game show host Jim Perry might say, “Let’s get to the cards!”

Do you have a suggestion for a card? What pinball related pseudonym, powers, attacks or status effects would the card have?