Pic of the Day: #NeverTooEarly #PowerOutage 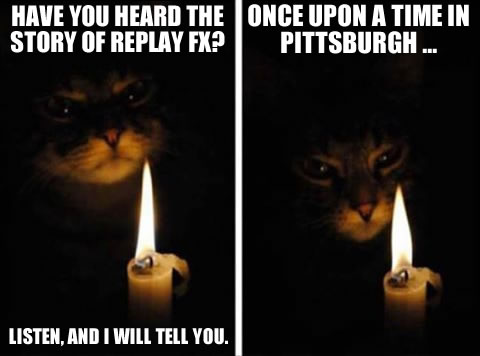 This cat looks like it’s about to tell the best spooky story, ever.

“Once upon a time, on a night just like this one, enterprising pinballers were playing at Rock Fantasy in a corner of Middletown, New York. Suddenly, the power shut off! All of the games went down! Some flickered with hopes of restarting, but then they were all dead! The games that is. Yes, the games were dead …

Just then, some of the players got calls on their cell phones. Voices on the other end of the calls started the speak faintly. Players tried to tell each other what the voices said. They all heard something like … “GET OUT, NOW”! Without warning, Stern’s Ghostbusters restarted itself! The Stay Puft Marshmallow Man jerked violently, back and forth! Pinballs sprayed onto the playfield and they all drained immediately down both outlanes! Ghostly phantoms floated above the game and went into the adjacent Walking Dead pinball machine!

The Well-Walker toy started to growl and moan as it glowed with its newly absorbed spirits. A smell of burnt coils hung thickly in the air. The children, who had already eaten seven cookies each before the power outage, started barking, meowing and howling at the moon! Sounds of shattered playfield glass signalled the players’ impending doom … “

In honor of the Rock Fantasy Pinball Open Power Outage!

Here is the livestream for some reason!

Here is the Champion, ZEN!

Some photos from the weather shortened not so Winter open! Play was ended due to a power outage…