Pic of the Day: SHARKWIND! 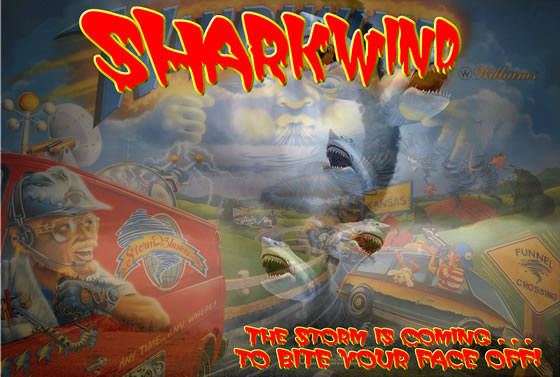 May the pinball gods have mercy on us!

From the twisted minds at SyFy and Williams comes … SHARKWIND!

It’s most dangerous pinball license EVER! What’s going to come out of that topper with the fan embedded in it? Pure TERROR, that’s what! I DARE you to lock balls when there are high speed sharks flying at you from overhead. The storm is coming … to BITE YOUR FACE OFF!

“We’re not making any money with pinball, so we just don’t give a crap anymore! Before we sell our souls to churning out slot machines, let’s show them what happens when the shark hits the fan!”

“Players will be ‘chomping at the bit’ to play this game!”

“Sink your teeth into some increased earnings at your location!”

“I’m too SCARED to even TRY a post pass!”

(The preceding was a parody of SyFy’s Sharknado, Williams’ Whirlwind, and corny pinball promotional flyers. I trust that you knew that.)