Sports pinball and esports show together for the first time 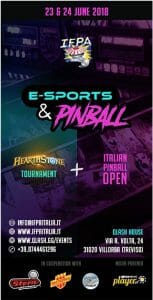 The double event will take place in the weekend of June, 23-24, 2018 and in addition to proposing two major competitions in the respective areas of pinball machines and video games, wants to create a relationship between these two communities of players, through a third Virtual Pinball tournament, which will take place with the traditional rules used for the Ifpa sports pinball tournaments, but instead of playing on “normal” pinball machines, it will be played on virtual machines, using tablet terminals. Fo

Source: Sports pinball and esports show together for the first time