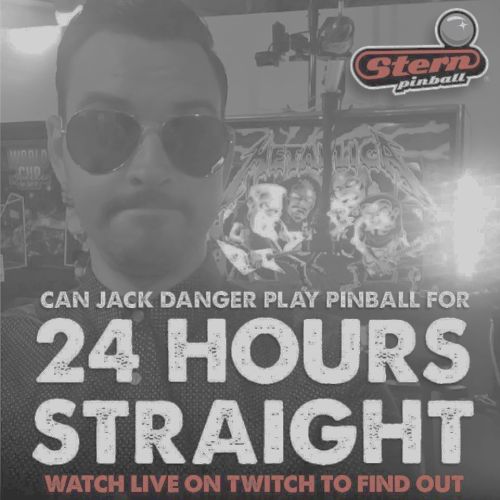 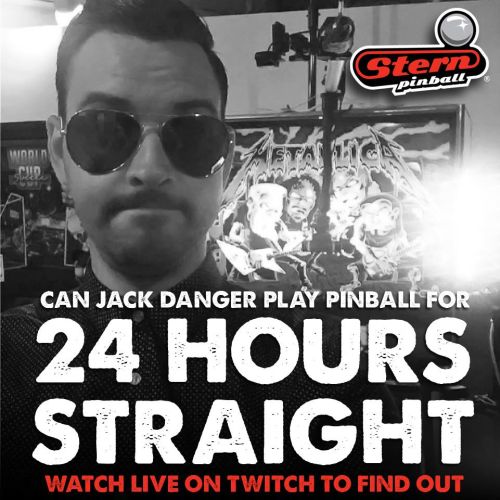 Tonight (8/19/15), starting at 5 PM Central Time, Dead Flip is going to play pinball for 24 straight hours. At least, that’s the goal. So cheer them on at their twitch channel: http://www.twitch.tv/dead_flip/ and watch zombification in progress.

ELK GROVE VILLAGE, Ill., Aug. 18, 2015 /PRNewswire/ — Stern Pinball, Inc., the world’s oldest and largest producer of arcade-quality pinball games, will be teaming up on Wednesday, August 19th at 5:00 p.m. CST with Dead Flip, an organization of Chicago-based pinball enthusiasts, for a live stream of Dead Flip’s Host, Jack Danger, while he attempts to play pinball for over 24 hours.

Jack Danger will push his flippers to the limit during the 24-hour online stream. Danger will begin playing, cycling out a new Stern Pinball machine every four hours, in an attempt to rocket himself into pinball stardom. The entirety of the event will be streamed from the Dead Flip Twitch Page – a rare event in the gaming website’s history!

“Pinball is a very physical game, and this will be quite an endurance test,” said Jack Danger, Host of Dead Flip, Twitch.tv’s largest pinball-only stream.

Cheer him on at http://www.twitch.tv/dead_flip/ and head over to Dead Flip’s website for more information.

“We’re excited to see Jack make pinball history,” said Gary Stern, Chairman and CEO of Stern Pinball. “It is our greatest pleasure to highlight the dedication and excitement pinball brings to its audience.”

Stern Pinball, Inc., headquartered just outside Chicago, Illinois, is the oldest and largest producer of arcade-quality pinball games in the world. Stern’s highly talented creative and technical teams design, engineer and manufacture a full line of popular pinball games, merchandise and accessories. Recent Stern titles include KISS, WWE Wrestlemania, The Walking Dead, Mustang, Star Trek, Metallica, The Avengers, X-Men, AC/DC, Tron, Transformers, Avatar, Iron Man, Batman, Spiderman and many more! All of Stern’s pinball games are crafted by hand and assembled by Stern’s expert team. A broad range of players enjoy Stern’s games from professional pinball players that compete in high-stakes international competitions around the globe to novice players who are discovering the allure of the silver ball for the first time. To join the fun and learn more, please visit www.sternpinball.com.

All trademarks and product names are the property of their respective companies.