Pinball Pros(e) v0.4 | The State of the New Pinball Dictionary 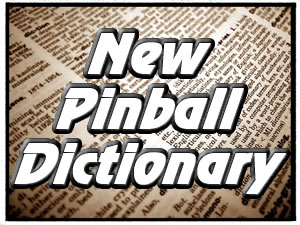 See more of the Dictionary!

Originally posted on and copypasta’d from TILTForums – The New Pinball Dictionary.

(Warning, incoming stream of consciousness … I would appreciate your thoughts.)

I wish I could use a format like Urban Dictionary (an API?), so I could link NewPinballDictionary.com and PinballDictionary.org to that. It would be more productive, more “Internet-y”. That way, people can upvote things to prominence and downvote things to obscurity at their heart’s content without waiting for me to sanction it. Does anyone here know how to do the programming magicks?

“@FunWithBonus, make this a thing!” (a comment referring to a suggested term)
It’s you all who have really made this NPD a thing, and I am thankful to you for that. It’s to the point where I doubt I can keep up with this by using my own site. I think I’ll still use my domain as the main page for now, though. The NPD has rescued the daily blog post streak a few times, especially when I have been away at a tournament without good Internet. But as soon as “the Internet” creates that magic bullet that basically is the pinball version of Urban Dictionary … (Don’t look at me for programming skill, I barely remember anything about C++

However, I am so close to just forwarding those URLs to this TILTForums topic. It’s had the most consistent and productive activity of all attempts thus far. Reddit has up/down votes but comments on entries lock after a time (90 days?). Pinside and Facebook are good for what they are, I suppose. But TILTForums is where its at.

I have been attempting to find a way to take myself out of the equation as a limiting factor.

Maybe I can go back and find all of the words ever suggested and make a post for each one?

Essentially a giant aggregation or clearinghouse of NPD terms. Like an “opening of the gates” or a “release of the hounds”.

It would take some time, and there would a post (possibly multiple posts) each day. It might last from now until Thanksgiving, maybe Christmas! But at least the entries would be up there, and it wouldn’t seem like I am playing favorites, or being a hindrance anymore. I sure would have to make those definition buttons smaller though or maybe eliminate them altogether.

Now that I’ve typed that out, I am seriously thinking about doing this. Starting this effort would be a challenge, like the first step in a marathon. Maybe I am crazy enough to think I could keep up with this.

Thanks for reading this.

By the way, here are some random ones on my to-do list to give you an idea: