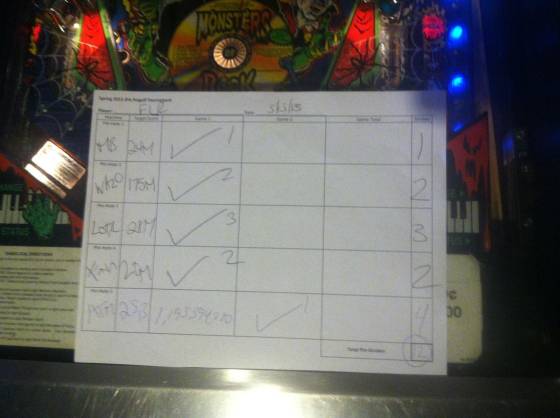 Francesco La Rocca’s PinGolf scorecard of 12 puts him in second position in this season’s JPA PinGolf Tournament. Steve Zahler remains in first place with 11, and Sanjay Shah goes to third place with 13.

There’s a PinGolf Saturday coming up this Saturday, June 1st and the Final will be on Wednesday, June 12th. I want to make it clear that the JPA PinGolf Tournament is open to ALL players, not just JPA members. If you happen to be in the area and want to come down on June 1st, you are welcome to try to qualify for the Final. That is, as long as you can be available to return on Wednesday, June 12th for the Final Round.

Welcome to the ninth season of the
Jersey Pinball Association PinGolf Tournament.

June 1st, 2013 is a PinGolf Saturday. This day will have an extended qualification period for players who would like to attempt more entries.

Eight on the Break arcade opens at 1:00 PM on Saturdays. I will be there no later than 2:00 PM on these days to accept any entries. PinGolf Saturday ends when the arcade closes, or when it’s clear that players are no longer going to attempt any entries.

From 1:00 PM to 6:00 PM on Wednesday June 12th, there will be a qualification period for any players who want to get those last-minute entries in. On this day, entries much be purchased by 6:00 PM and completed by 6:30 PM. This is so I can get ready for the Final and save time for any tie-breakers that are necessary. The Final will begin at 7:00 PM where the top three players will battle it out in a five-game Final for the Championship and the cash.

I wish continued good luck and skill to all competitors. The following JPA League members have still not used their one free PinGolf entry yet: