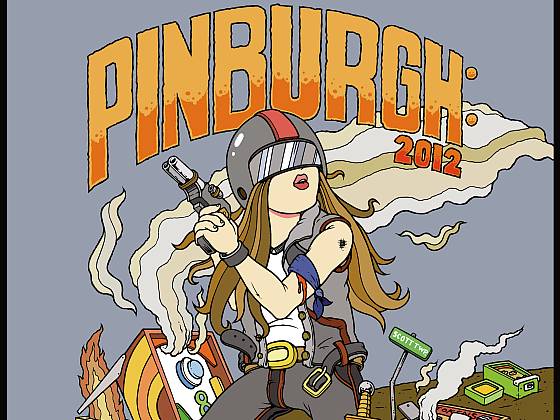 Matt Wall presents a list of the reasons why we pinball competitors will miss going to Pinburgh this year. If not for certain environmental complications, Pinburgh would be happening right now. I trust I will see many of you next year when the pinball family reunion returns.

Top Ten Things I love about Pinburgh
by: Matt Wall

OK, so we’re all missing Pinburgh this year. It’s the Super Bowl, the Tet, the Burning Man, and the TED of Pinball all rolled into one. Maybe best not to dwell on it.

But my long-suffering spouse asked me recently why it was such a big deal to miss it, in contrast to all the other tournaments and shows we’re missing this year; even though she’s been with me on it since Pinburgh Zero, she’s never attended.

So I thought about it and voila.

10. Balanced Competition Banks
I admit this may be in part because it plays to my strengths, which is the closer the age of the machine’s manufacture comes to my year of birth, the better I do on it, but it really is the best tournament in terms of the bank composition.

First off, the groups of four machines with three groups of four playing at once; it allows you to watch some other play while you wait your own turn on your own group’s machine, and really ponder the group of machines. You end up playing just over 10% of the machines in the tournament banks (depending on how far you go in the finals, if anywhere) but somehow after playing in Pinburgh, I feel like a given machine I’ve played that year is “mine” just a little bit more.

Then there’s the era balance. The young pups who can play an hour on modern Sterns are flummoxed by the two inch flipper tables, and people like me who can’t process a thirty-page rules sheet due to neurological decay can dredge up their muscle memories about how to play Nine Ball and Captain Fantastic just so. Every one of the major pinball skills comes into play somewhere in the banks.

And the beauty of design really comes to the forefront, the way the banks are composed. Beyond the fan layout; wide bodies; non-Italian layouts; quirky or early implementations of gimmicks; toys and artwork; theme integration; only when you see machines grouped in this way so artfully do many of these nuances really surface properly.

It’s not just the era of machines; it’s the era of players, coming together. It feels like a real test of skill and not the randomized ones in some tournaments.

Finally, there’s the curated balance among the machines. There’s so much thought that goes into grouping them for competition, even the quirks and problem machines — which are idiosyncratic to players, anyway, for the most part — are sources of deep pleasure. (And they keep the real competition stinkers out, but you can find many of them on the other side of the hall, so you know what a great job the TDs do in selecting the banks.)

9. Meeting People from all over the world
The more recent years where this has become an international extravaganza have been excellent: I’ve made real friendships at Pinburgh, and in part it’s the two-hour playing windows and the speed-dating format of being in a group of four. I can see some real skill in players I’ve never met or competed against before, and we can get a sense about how things are elsewhere. Like any good international convening of like-minded people, it brings us all closer together.

8. Old Friends
The converse: I’ve run into old friends from way back at the more recent Pinburghs I never thought I’d see again, and it’s been a delightful reunion. When you get serendipitously paired up with an old friend in the early rounds in particular, it feels like the Pinball gods are rewarding one for sticking with the thing all this time. There’s a couple of people I’ve ended up playing with two or three years running — skills grouping from the Swiss format in part, I’m sure — and it’s been fun to have those rematches.

7. Playing on stage
Even though it’s Championship cosplay to get assigned to the stage banks during the preliminary rounds, it’s still amazingly fun to climb up that stage and play where the champs are going to be playing in the final rounds. And once in recent years I actually got to play there, legit (for the Intergalactic finals), which was extremely fun. Thanks to some EM magic I got to stay a while, too. Every player of any skill level has a shot at playing on stage in the early rounds, and that’s just cool.

6. Playing a “New” Table
The ReplayFX collection, and the presumed supplemental loans to round out the banks, are pretty incredible, and nothing measures this quite so much as the fact I keep running into machines at Pinburgh I’ve never played before. Given I first flipped a machine fifty years ago, that’s saying something. The restoration and preservation mission of the organization is best embodied by the wonder of finding a rare title, and in prime playing shape, in the competition banks. Maybe it’s inevitable with 400+ machines, but I’ve never failed to find something that made my jaw drop.

5. The TDs and Techs
Their patience, fortitude, and dedication are obvious. Their organizational skills are clearly immense. Their willingness to skip playing and make sure we get a great experience, however, is to me the most inspiring thing of all. It’s not just love of the game, it’s dedication to the scope and spirit of the event. And if you pay attention, you’ll learn something about the craft of both running a tournament and keeping a machine running.

4. The Warm Up Hour on Day 1
I’m hard pressed to come up with an analogy from another sport or activity that would describe that magic single hour on Day 1 when players can roam the 90+ banks and the dozens of back up machines to get in a few flips before the competition begins. It’s like Christmas morning, but you can only unwrap two packages after seeing a hundred under the tree. It’s a heady mix of anticipation and the mentality of a shopping spree. Do you try to get in as many machines as possible? Should you work on a technique? Get a chance to play an old favorite, or try a new one? Stop and talk to a friend, play a little stall ball with a group, or just walk among the machines to orient yourself for later? It’s a unique moment; everybody’s tied for first and everything is waiting for you.

3. Pittsburgh
OK, so I used to live in Pittsburgh (see reason number 1, below) so I have a soft spot in my heart for the place. But it *is* a fantastic city with a ton to see and do, which Pinburgh can make impossible to enjoy since we’re inside for four or five days, 12 hours a day. That said just being there is a pleasure, most particularly for the pinball karma. Its spiritual center as the place of the pinball revival’s chrysalis, the excellent venues to play around town, and just the ramp-like glory of Pittsburgh’s three-dimensional navigation make it far more special than some tournament at a Holiday Inn. You can go to the roof of the convention center and take a quick tour of the city just by walking around in a circle.

2. Seeing how far Kevin’s beard has progressed
Kevin and I used to be doubles partners back in the day, when we were younger pups, and now we’re two old men with santa beards. There’s something comforting about comparing them every year. (Disclaimer: I shaved mine recently. Sadface. But that doesn’t mean I won’t grow it back out for next year.) OK, yes, this is a metaphor for being happy about pinball having been saved and currently in a much better place than anyone might have thought possible in the dark days of 1999-2000, but I also mean it literally.

1. I named it
I am a Pinburgh parasite. The most I ever did to contribute was help move machines around a little for the original Pinburghs I-III. Steve Zumoff, Kevin, and Rob Chesnavich put together the first Pinburgh that attracted players from out of town, at the Pitt Union. Naming that competition “Pinburgh”, though, was my idea, and it came out of what I like to call Pinburgh Zero, which was a nine-payer tournament played the previous year at the Carnegie Mellon student center on the four machines there at the time, mostly among a group of us that had played in what we called the Lizard Lunchtime League (after Bob the Lizard Kuszewski), and we decided at one point we should have a proper tournament, which we executed on a Saturday.

My enduring memory of that competition was waiting around for Kevin to finish off playing his games – just destroying us in competition wasn’t enough, he wanted to set the high score on every machine every time he played. It was an introduction to excellence for me, to real dedication, beyond the competitions I’d played in a decade earlier and my very first pinball tournament circa 1978 (which was rigged; separate story). In full retronymic tradition, at one point after Kevin, who was a newcomer to town that year, put up a towering score — either Shadow or Twilight Zone, memory escapes me — I proclaimed “Welcome to Pinburgh!!” and the thing had a name.

I didn’t participate in Pinburgh after 2001, until 2015 in its second incarnation, because life happened (and I was a long, long way away much of the time), and as much as I regret not having been part of that revival and growth, it’s been a source of particular satisfaction to me to see what it’s become, that growth made all the more stark by the interregnum. Along the way I have the dubious distinction (after falling into the newly-created E division finals last year; I had an epic-awful Round 9) of having played in the finals every division of Pinburgh, A-E, and I even won a division once.

I did not conceive the baby, nor did I raise it, but I did name it, and hell, that’s something to put in an obituary.