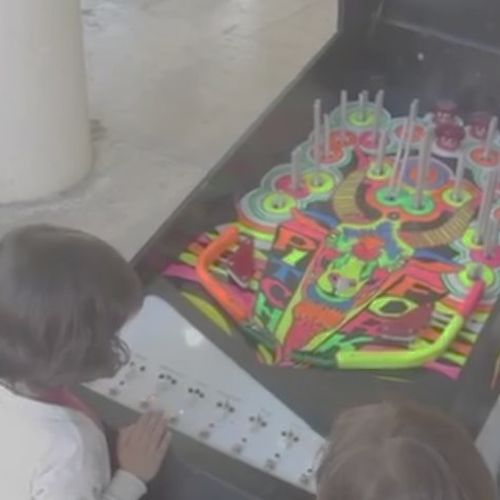 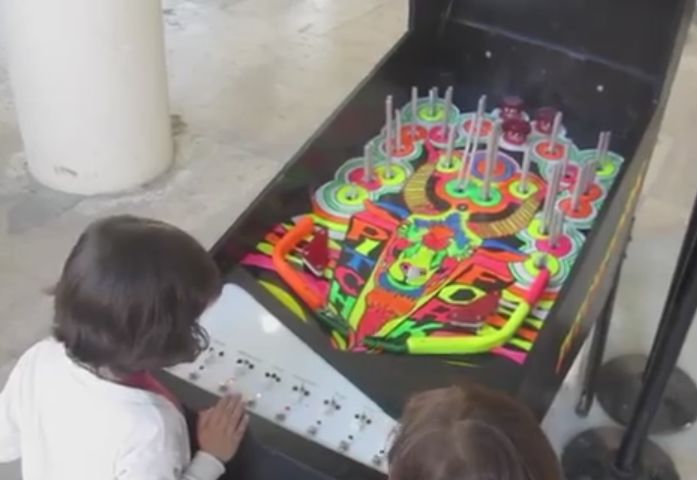 (turn your speakers down a bit before playing…)

The Temple of Din is an audio arcade consisting of a series of pinball/musical instrument hybrids that make sound generation, not scoring the games main objective. Works like; Pinball Pianola (dualplover.com/pinballpianola/) a Frankenstein experiment combining an upright piano and a pinball game with twenty flippers triggered by a keyboard that shoots balls against the soundboard’s exposed strings, Balls for Cthulhu (dualplover.com/cthulhu/) a pentagram shaped multiplayer game formed by ten guitars with their fret boards facing inward, so the strings take the full brunt of balls jostled by players stationed at each of the stars five tips, Flip-Off (dualplover.com/flipoff/) a pin/foosball hybrid that creates automated break core music by triggering Toecutter samples and Pitchfork (dualplover.com/pitchfork/) which has twenty tuning forks incorporated throughout the playfield you can aim for.

Built for musical play by Australian sound artist Lucas Abela these machines form the Temple of Din, a place that can only be attributed to the cacophonous Miami Beach video arcade of his youth. Where the reverberating screams of multiple amusement machines housed closely together in a small concrete room became etched into his psyche and must have influenced his adult life as part of the international free-noise underground.

Resembling an ancient proto-pinball machine crafted eons ago and found centuries later in a Javanese burial chamber; Gamelan Wizard is an eight player pinball game housed in an intricately carved octagon pendopo that incorporates Gamelan instrumentation into it’s playfield so as you play it plays. Unlike Abela’s previous musical instrument/pinball hybrids this new machine is totally acoustic taking advantage of the naturally loud Gamelan Instrumentation resonating within the body of the game.

To execute Gamelan Wizard Lucas Abela has teamed up with two of Yogyakarta’s most celebrated musicians Wukir Suryadi and Rully Shabara in addition to working with famed Gamelan master Wibowo who, along with his skilled craftspeople, hand carved the cabinet and forged the Gamelan. By pitting together our two disparate icons; Pinnies and Gamelan, we have created a unique participatory installation that meshes together our respective cultural identities.