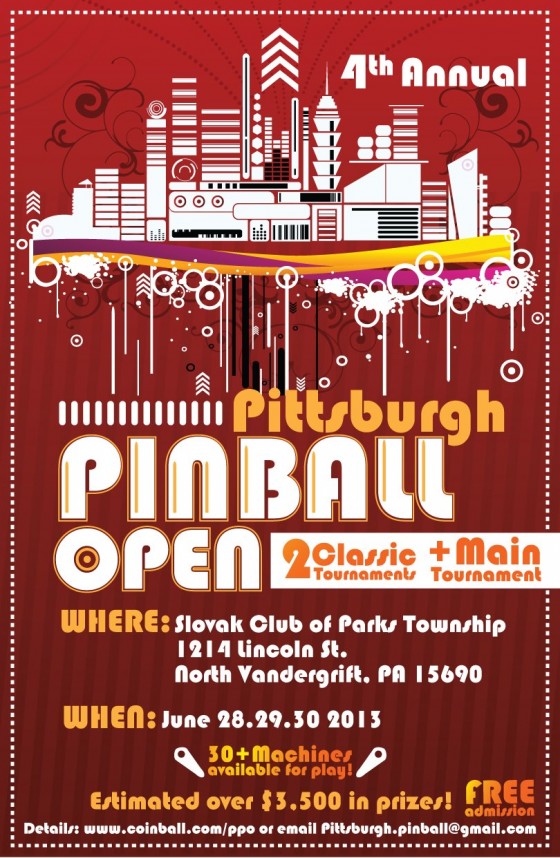 WHAT:
A competitive pinball event, open to all!

In addition to the tournament machines we will also have additional machines on site for those not interested in competitive play.

100% payout on all entry fees for all tournaments! Estimated $3,500 in payouts based on last year’s results.

Open to the public – free admission!

For every game brought to the event, free entries can be earned.

A block of rooms has been reserved at the Clarion Hotel in New Kensington. They are under the Pittsburgh Pinball Open. Price is $75.00 a night plus applicable taxes. This price is only good until May 28, 2013.

Pittsburgh is a city with a long memory. Nostalgia is a part of our culture here, and we can look back with pride on decades of great radio, great sports moments, great universities and even restaurants that have stood the test of time. We value our history, and enjoy remembering our roots, so it’s no surprise that Pittsburgh is the home of the largest league of pinball players in the entire country.

With all the new video games out these days, pinball is a definite throw-back, and getting good at it is easier in Pittsburgh than one might think. Several South-Side bars and restaurants boast one or more machines, and host the Pittsburgh Pinball League (PPL) weekly. And the league offers many opportunities for Pittsburghers to come out and show their competitive side.

June 28th through the 30th this year, PPL is holding their fourth annual Pittsburgh Pinball Open, a competitive pinball event open to everyone! There will be several machines set aside for the tournament, but there will also be pinball machines available for those who don’t wish to compete, but just want to come out and get a good dose of nostalgia. There’s no admission fee for the event – everyone is welcome to come out and play!

Classics tournaments will be held Friday and Saturday (June 28 and 29).

There will be a one-time $5 registration fee for all players in addition to the entry fees for the tournaments. This fee is to help with the costs associated with running the event. However, there is 100% payout on all entry fees for all tournaments!

Free entries will be given for every game you bring to the Pittsburgh Pinball Open. Contact pittsburgh.pinball@gmail.com for more information.

Hotel rooms are available at the discounted rate of $75 per night (plus taxes) during the tournament, as long as you book before May 28th, at the Clarion Hotel in New Kensington.

Want to know more about Pinball culture in Pittsburgh? Take a look at www.coinball.com for league details, tournament info, and a calendar of PPL events! Or, contact the league at pittsburgh.pinball@gmail.com for additional information. Information on the Pittsburgh Pinball Open can be found on www.coinball.com/PPO.