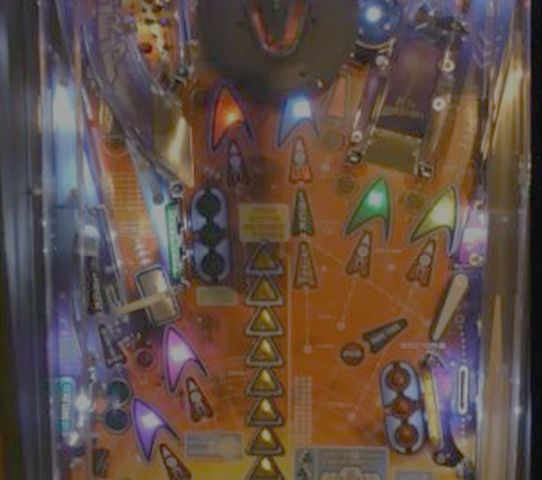 [Want to ask a Tumblr question? “Right this way, old man!” I’ll answer whatever I can.] Let’s take a look at a couple of snapshots.

The first picture is of the colored lights as a player is playing Kobayashi Maru.

The second picture is of the modes and their colors. Space Jump is colored yellow but the light is too dim in this picture to see it.

Therefore, connecting colors of shots and colors of the modes we have:

Green = Save the Enterprise = Right Ramp

For example, regarding the 2X shot awards, completing “Save the Enterprise III” will double the value of right ramp shots.

The first time you make each shot during Kobayashi Maru, you get a small value.

However, the value of each shot you make the second time depends on the number of shots you have made during that mode.

I cannot confirm whether shots on Level 2 or 3 modes would contribute to a Level One Kobayashi Maru. From what I have been able to tell, the answer is no. UNLESS you are talking about the 2X shot effect. If you started Kobayashi Maru AFTER completing Save the Enterprise III, your right ramp will be doubled during Kobayashi like it’s supposed to be.