If you follow pinball, you may have heard about the IFPA’s Heads-Up tournament challenge that took place this on Saturday in Las Vegas. It was awesome!

This format is a game changer, literally. This year marks 25 years of competitive pinball for me. You can get kind of jaded in that time by seeing a lot of the same formats over and over. So why was it so different? Well, here’s a few notes… (I do warn you, this got longer than I expected it to be 😉 ) 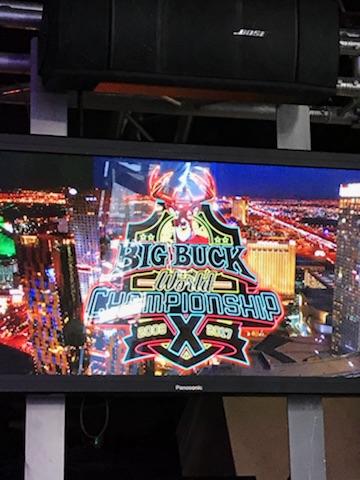 The format is head to head, objective based. Unless you chose the “2 Minute Drill” as an objective, points were not used to determine the winner in each game. So similar to a PinGolf event, you’re trying to achieve an objective.
There were 3 titles (Star Wars, Aerosmith, and Ghostbusters), and each machine has a total 5 objectives to choose from ranging from starting a multiball, finishing a certain number of modes, lighting or collecting a Super Jackpot or Extra Ball perhaps, or as mentioned total score after a 2 minute period. Two copies of each machine placed side by side. 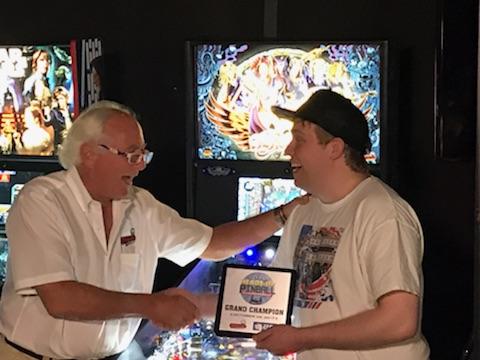 One of the coolest parts? You played next to your opponent, starting at the same time on one of the two copies of each title. The Head to Head aspect involved a race to achieve the objective! Let me explain: We were placed in a bracket, seeded based on our current IFPA ranking. No issues there. When your match was called, you were assigned to a title where you would stay and play your match (more detail to follow).

When you got to the game, the higher seed would get to choose either the first objective OR which machine to play on. You may have a preference, but to be honest, it never seemed to be a factor as much as I thought it would be (all games were NIB, so they were fast and brutal just like a brand new game plays, lol).

So you pick the objective, your opponent picks their machine and you’re ready to play. You’re playing a race to 2 wins format (best 2 out of 3). After the first game, the loser now gets the choice, same for the 3rd game if needed. No objective may be chosen twice in your match, even if the other person was the chooser. So a match that goes to 3 games will play 3 of the 5 objectives for that game. 2 out of 3 matches, with double elimination. 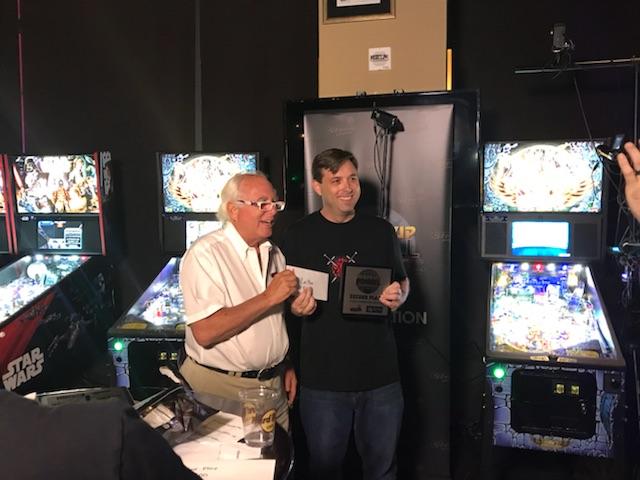 That’s it, pretty simple. The 5 objectives were well chosen (see link below) from each game. Games were set to 5 balls, to help give you time to reach an objective. One really neat thing was some of the objectives had you chose HOW to achieve them. For example on Aerosmith, there was “Start Toybox Multiball”. However when choosing this goal, you also must state before playing, HOW MANY BALLS in your multiball (you could choose 3-6 as the goal). Another one was “2X Shot Multiplier” but then you chose WHICH SHOT! So people were playing and picking the center ramp. You wouldn’t believe how many misses go into the Lock shot when you miss the center ramp! 🙂 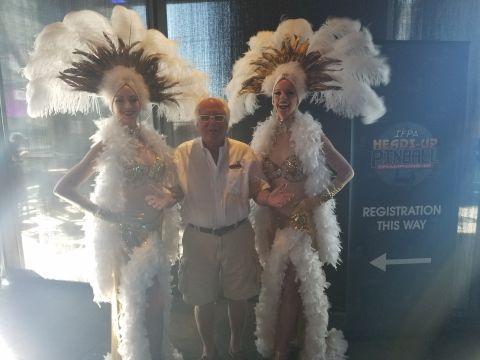 One more example that stands out as being particularly difficult was “Finish Boba Fett Hurry-Up” on Star Wars. Ok, you’re not going to go through and qualify enough combos to light it. You’re going to pick Han as your character, then pick the skill shot “Light Boba Fett”. Lights all the arrows white, and you must hit 4 of them to BEGIN the Hurry-Up mode. Now you must hit the 5 successive shots, in order before your timer runs out.

Couple of things to consider on this one, when you need 4 of the white arrows to start the hurry-up you DON’T want to hit the left orbit or right ramp. That starts hyperspace hurry-up and freezes your progress on Boba Fett. Yuck! One more thing, if you drain at any point before completing this objective, you start next ball at square one and no progress gained.

Ok, enough examples this is getting really long. A quick few observations from this really unique event.

– First off, like I said you’re not usually going for the higher score. This is a big shift from most other formats. So your prep changes. You’re not going to play a game the way you’re used to playing it.

– You’re racing Head to Head. Hello nerves, I had almost forgotten what it was like playing all wound up! lol You’re looking over to see the progress of your opponent. Or in one of my matches, I had chosen 6-ball multiball on Aerosmith. All of a sudden he’s hitting his abort button, I realize he’s at 3 balls locked and I only have 1! Every time he hit his button, my heart sank a bit. That was pretty cool! (I pulled it out, but barely).

– The games chosen were based off what you had played previously. Elizabeth kept track of which games had been played by each player and made the best judgment based on the 2 players path to that point. She would discuss with Doug if there wasn’t an obvious answer. It was just as good as Match Play’s random sort, I felt. 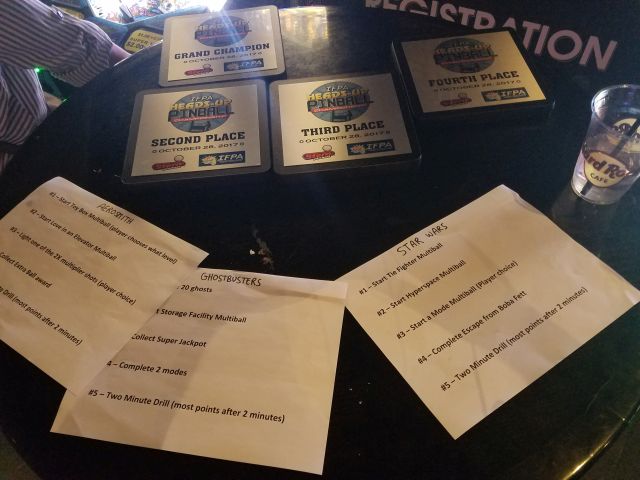 The goals for each game and the trophies.

– Many of your losses are REALLY close!

– Every game played had an official watching the match to confirm the objected had been achieved. So a number of experienced players were able to assist in this when they were not playing. So there was a sense you were helping run the event, which you were. So that level of participation was really cool.

– Karl has the best side by side set up in order to stream this event! You could see each player’s progression toward each goal. Karl deserves recognition for how much he does for the sport of pinball. His software, streaming, and “Critical Hit” games are adding a lot to pinball. Thank you Karl!

– Knowing deeper rules sets will win you games! There were some lesser known items on games that could help you achieve an objective quicker. (see Aerosmith collect Extra Ball or Super Jackpot on Ghostbusters). Again, these are things you may never go far. So guess what, your strategy was crucial. Picking the right objective against a particular opponent could make or break your match.

– VEGAS BABY. It’s good to be back in this city, on such a huge stage. 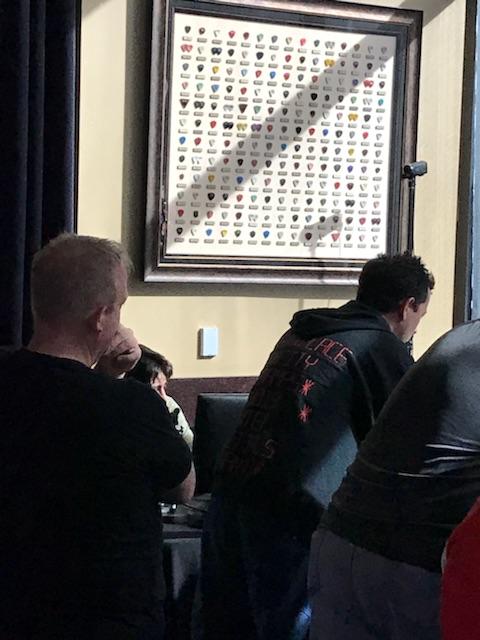 – Finally one of the coolest things… have you ever been in a tournament that actually goes faster as you get to the end? Usually, you have skilled players in the Finals, playing very long games, a lot of times with gaps between balls. This is the opposite, however. The skilled players achieve the objectives faster, so the games went pretty quick.

– Congratulations to Raymond Davidson with a heck of a performance to come back and beat Karl (who sent him to the losers bracket) in 2 matches!

WHEW! Still there? There’s a bit more, especially the venue we shared with the Big Buck Hunter World Championships and their “unique” (loudest man alive) MC, haha.
My takeaways? This was A LOT of fun! Everyone really seemed to enjoy themselves. You’re draining balls and you don’t care. It was just different. I didn’t hear any yelling, banging machines, or outbursts like you are apt to hear at many events. Instead, you have top players, sharing notes, exposing “secrets” and having a fun time. I also felt the camaraderie has very high as well.
Also, this is great for the viewer. It’s fast and exciting. This might be a format to get our sport to the next level. It’s easy to understand and exciting to follow, and it was all done in one day! It really is a game changer. Excited to watch this grow.

Finally, and MOST IMPORTANTLY, this doesn’t happen without the creation and direction from Josh Sharpe, Douglas Polka, Karl DeAngelo, Elizabeth Cromwell and Zach Sharpe. You are all seriously amazing. Thank you for a really fun event. You can bet I’ll be at the next one 🙂

*Would love to hear your comments. Feel free to ask questions and either myself or any competitor that was there would be happy to answer them. Thanks for reading and supporting competitive pinball. 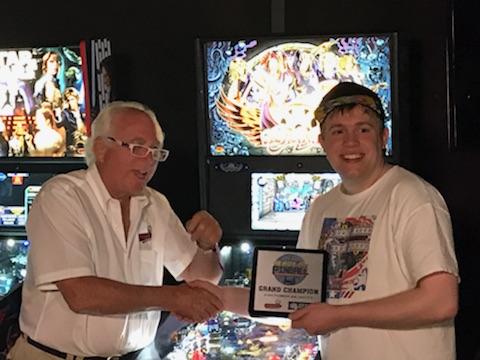 Thanks to Fred Richardson for writing this detailed recap of what happened at the first IFPA Heads-Up Championship in Las Vegas. If you have written an article on pinball and would like it featured on FunWithBonus.com, send me an email at funwithbonus@gmail.com with the subject: Pinball Article.