Gaming for a good cause [Extra Life]

On Saturday, October 20th, the “biggest gaming charity event of the year” is going to happen. It’s called Extra Life. Game players from around the world will be holding marathon gaming sessions (24 hours!) to benefit Children’s Miracle Network Hospitals and cancer research. 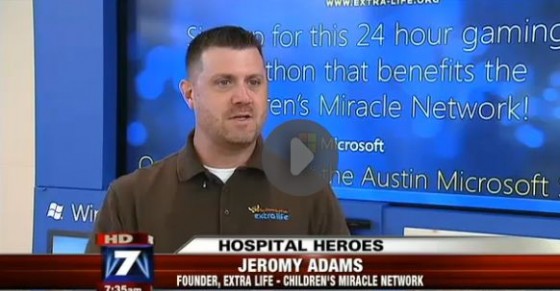 Jeromy ‘Doc’ Adams: Founder of Extra Life
Click for a video news feature of the event

Of course, I started thinking about how pinballers could possibly get into this. I know that it would be too late to do anything with Extra Life this year. Besides, October 20th is deep in the schedule of Pinball Expo. But, what about next time? Could we be a part of this event next year? By we I mean pinballers from around the world.

It would be major positive publicity for the pinball hobby. Let’s think of some places where a crazy thing like a 24-hour pinball session could happen. Well, obvious places would be the PAPA World Headquarters and the Pinball Hall of Fame in Las Vegas. Slightly less obvious would be places like The Silverball Museum in Asbury Park, New Jersey, the Pinball Wizard Arcade in Pelham, New Hampshire, or the hub of pinball culture that is Seattle/Tacoma Washington.

However, the point of Extra Life for videogamers is that anyone with a platform for gaming can participate. Similarly, any arcade or pinballer with a few games in their collection could become a player in the fight against cancer. I realize that number is not nearly as many, but it could still be significant.

So, how about it? Would it be possible for you to play pinball for 24-hours? Would it be feasible to have events like “Extra Life Pinball Opens”, where qualifying is for 24 straight hours on one day in prominent pinball locations around the world, with players being sponsors for Extra Life?