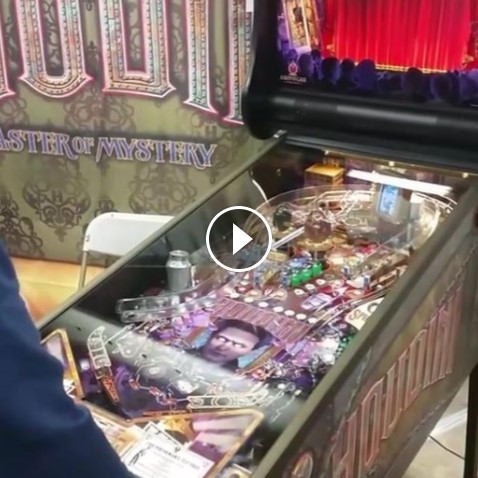 I was very pleasantly surprised with what I saw and played of Houdini at Pinfest. Keep in mind that this is based off of ONE GAME played and other games observed.

I don’t pay attention to pinball art in general, but Houdini looks impressive to me. Take that with whatever many grains of salt you need, because it doesn’t take much art to get me into the environment of the game. I’m more about the rules, shot patterns and sounds.

The LCD screen sometimes looks melded into the backglass with the way the scoreboard graphics blend into it. However, there are times when the “audience members” block the screen text on the bottom of the screen, but that’s easy to address.

So, it surprised the heck out of me when I made the shot and the other shots on the right as well.

More practical stuff … The chains on the bumpers give an interesting effect when the ball bounces between them. If the ball gets in there for a while, it looks like like the ball is trying to escape the chains.

The catapult works well, at least for the amount of times that I saw it. It was making successful jump shots from half court, right into the trunk. How long will that last in a real-world environment, though.

The stage shot is the game’s bash target in a way. It’s where you access Houdini’s illusions which are modes. When you hit the stage, the “curtains” move aside. There is a very shallow saucer behind it that you need to land the ball in. It’s not a guarantee that the ball will stay in the saucer, because it is shallower than the saucer on Mata Hari. There will be times where the ball will lip out of the saucer and go back into the bumper area or back down to the player. But, the it is not a killer drain shot usually.

Even so, because there are a lot of tight shots, there will be a lot misses and general bricking by players. I am concerned that new players may get frustrated by the bricking and give up before they “GIT GUD”.

Rules stuff … There are a few modes (based on Houdini’s magical illusions) and Multiballs already in the game. There are also combo missions, where the game tells you to make a succession of shots for a large award. The easier Multiball to access was Seance Multiball where the goal is to shoot the standups that spell S-E-A-N-C-E. In this mode, bricking shots equals PROFIT! Actually, it’s better to display some “controlled bricking” talents to pick off those standups and control the other balls.

The more famous Multiball is the reverse and inverted multiball. At the start you have the choice: Just do the reverse flippers for normal scoring, or do reverse flippers AND inverted for double scoring. Inverted means the flipper is down when the flipper button is pressed and up when the button is released. It’s genius in it’s simplicity. When I was playing this I thought, “why hasn’t someone done this before”? (Has someone done this before?)

I was getting the hang of the reverse/inverted Multiball for about 15-20 seconds. Then my mind folded in on itself, I got confused, and my flipper activity devolved to random flailing. I had no idea what was going on, and that was cool.

Was this game really a result of 5-6 months of development? If so that’s impressive. I talked with the exhibitors who said they were about 28% does with the code, but that number was said in jest. It’s one of those numbers you pull out of thin air, like when people say things like “95% of people don’t do this” or “99% of people like that”. However, they seem to know what’s going to end up in the game as a finished product.

So … good job, American Pinball. Now, lets see you build hundreds of them.