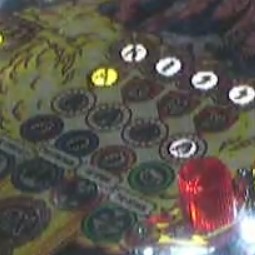 The Lob Shot is meant to help take down those hard to get targets that are low in comparison to others. These targets would most likely be missed high due to how low they are, or the player might just hit the slingshot if they flip too late. Examples are the “K” in K-I-S-S or possibly the lowest left target on The Walking Dead or the lower “B” BOB target on Dialed IN.

“You tap hard (but still a tap) when the ball is exactly half way down the bat rather waiting until the ball is near the tip of the bat for a standard tap. The lob is a weak shot that bloops the ball into a “Difficult to shoot target” that sits low (like the “K” in KISS), since a lot of full powered shots would hit the slingshot when shooting low.”