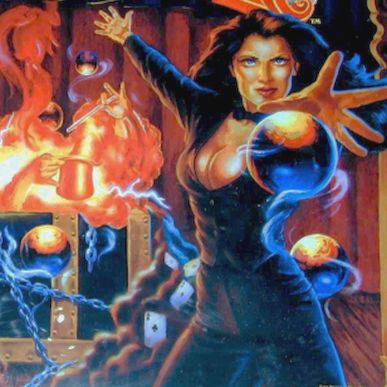 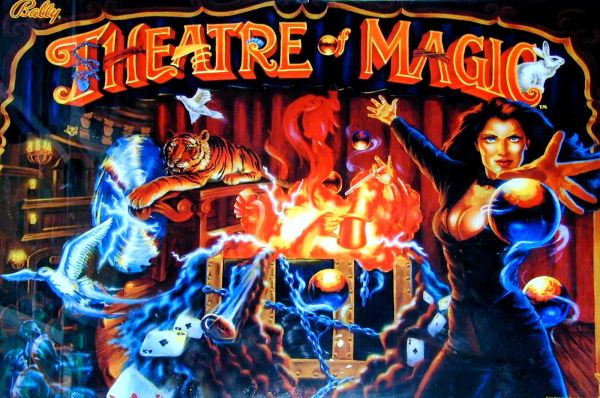 It’s SUPERLeague at Modern Pinball! Look at all of those players on a random Thursday. I had a fortunate game of Theatre of Magic as part of my entry.

The most important thing to get in Theatre Of Magic is 8X bonus. Yes, other things will happen as you play naturally, but make sure you have 8X bonus when you are done.

You know what Multiball is for? Getting Jackpots? NO! It’s for getting 8X bonus! OK, you can get Jackpots too if you want when you are done earning the 8X bonus.

Do you know what Tiger Saw Multiball is for? Getting Jackpots from the captive ball? NO! It for getting 8X bonus AND getting Theatre letters from the left orbit because for some reason the game allows this. At 8X, each Theatre letter is worth 4 Million in bonus. Plus you are in less danger if you have a ball trapped on the left flipper while doing this. If you happen to hit the captive ball by accident, then so be it. Recover from that missed shot and continue attacking the left orbit.

If TOM were to get an update, I would want it to address that left orbit flaw in the rule set. I know it’s not going to happen. Besides, it doesn’t really need to happen. Other than that flaw, the game is fun which is why it’s so highly rated.

On a related note, I’ve just learned that I’ve taken another SUPERLeague title. That’s going to be my fourth significant “above the line” top-20 result from this competition.  I don’t look forward to getting WPPR points nerfed again, but I realize it is inevitable. I don’t have any confirmation of this, but the writing is on the wall. I see a new Coast 2 Coast Pinball podcast was posted with Josh Sharpe. I haven’t heard it yet. I wonder if there will be any WPPR news. At least I will have a decent sample set to see how a new WPPR system update affects different kinds of tournaments:

Besides, I’ll still visit Modern Pinball and play in SUPERLeague. Why not? It’s only one state and a concrete jungle away. I remember when I had to fly around the country and spend delicious amounts of dollars to participate in the WPPR chase. I’ll gladly take a shorter trip even with the risk of getting impaled by taxi cabs in Manhattan for the opportunity to play those games! Usually I don’t make New Year’s resolutions, but for this year, it was to visit Modern Pinball way more often. I missed out on the Broadway Arcade scene years ago because I wasn’t really “in the hobby” at that time. Modern Pinball NYC is my Broadway Arcade.