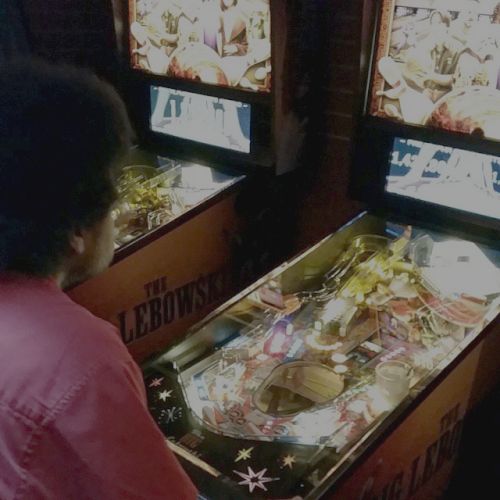 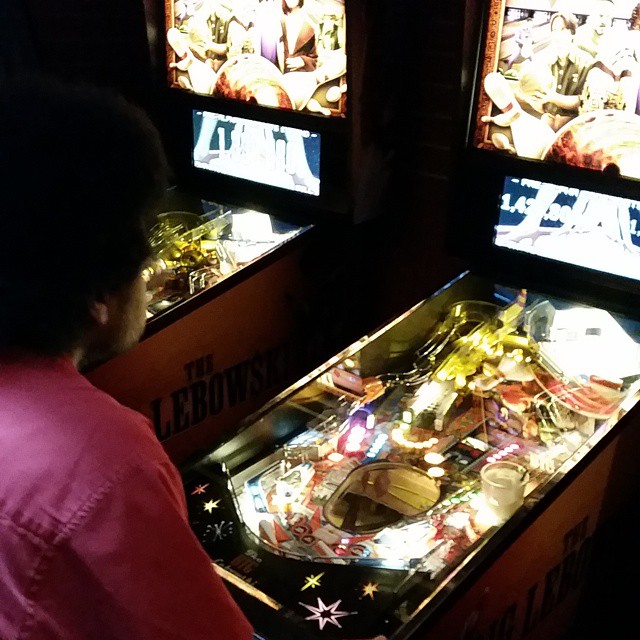 I really need to go to Manhattan more often. Especially since there’s a place like Modern Pinball NYC just waiting there for me to visit.

Recently, Modern Pinball had a party for Dutch Pinball’s The Big Lebowski pinball machine. That motivated me to brave through the magical land of Manhattan. A land where the rules of the road switch as soon as you enter. A land where the taxis roam around like they are untouchable as if they borrowed some of Super Mario’s invincible stars. This day, there were a bunch of drunk Santa’s ambling around like extra’s from the Walking Dead. It was SantaCon 2014, and the Santas were out in full force.

However, none of that mattered. I was going to play The Big Lebowski. I wasn’t able to go see it at Pinball Expo, so nothing was going to get in the way of my opportunity to play it this time. When I arrived at Modern Pinball, I was glad to see how packed it was with players for all of the games there, not just TBL.

Apparently, the software was at the same level as was shown at Pinball Expo, so it was still at the “Pre-Alpha” stage. It didn’t matter to me. Pictures and video of the game do not do it justice. TBL looks impressive, and it feels and flips like a Bally/Williams game. That’s a good thing, by the way.

As this point, the game has two major features ready. One is the mini-playfield bowling. By shooting the ball in the far left saucer or the top left of the upper playfield, the ball gets fed into the mini-playfield. You have to time it so that the ball rolls right between the one and two pins (or the one and three pins) to get a strike. If you fail, you do get the chance to pick up the spare, just like real bowling ^_^ .

The other feature is the multiball. There are two targets guarding the left ramp similar to Cirqus Voltaire or Whitewater. You need to hit both to activate the lock at the top of the left ramp. Do that three times and Multiball starts with Jackpots active on all of the major shots.

No modes are there yet, so when you spell out something like M-A-U-D-E or D-O-N-N-Y and shoot the left saucer, or roll back the rug, the game will give you credit for starting the mode as a placeholder.

Anyway, if this is the “Pre-Alpha” stage, the finished game will be fantastic. However, some new events have … happened … concerning the game and discussion has blown up on Pinside (Click here for the forum post). Since I do not have money speculated toward this effort, my only comment is that I hope things are ironed out.