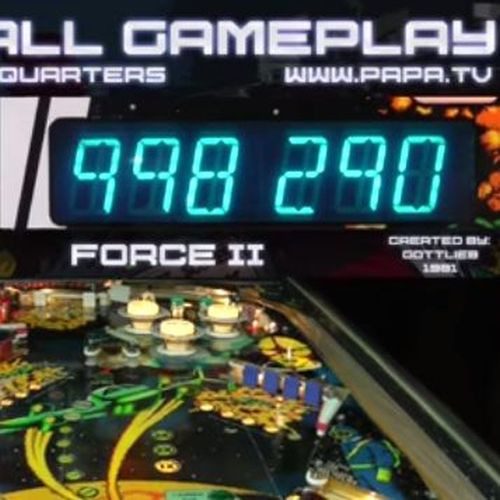 An achievement where a player has ended the game with as many nines as the scoreboard will allow.

A Nine-Out attempt on a physical pinball game requires a different kind of skill where the player is trying to get a close to the maximum score that can be shown, without causing the score to roll over back to zero.

Sometimes, a player will attempt to get just enough bonus count while carefully scoring certain, small value shots. They hope that the bonus will take their score to all nines when they drain, or that they can tilt the game just as the score reaches all nines.

Other times, a player will forgo the bonus entirely, seeking to tilt the game just as their score is as close as they can get to showing all nines.

A reason for doing this is that games without high score lists and most older games will not take into account that the player has turned over the game. This means the game may not put a turned over score on the high score list at all.

Some games like Sword of Fury, High Speed, and F-14 will show a high score as all nines even if the player turns over the game.

Other pinball games like Alien Crush and Devil’s Crush end the game when the player achieves the maximum score. In this case, the player who is attempting to Nine-Out a game is simply trying to beat the entire game without worrying about the score flipping back over to zero. However, Nine-Out victories on Alien Crush and Devil’s Crush require many hours of dedicated gameplay to achieve.

A “Nine-Out” attempt on Force II.