First of all, let me start off by saying that I am going to forget some of the fantabulous stuff that happened during the last two days of the tournament. Luckily, I remembered to take at least some photos to help me remember what happened. Unlike last year, I wasn’t fortunate enough to place anywhere near the top 4 (actually: 22nd), but by the end of the day that didn’t really matter.

Let’s begin with what I believe was the best move of the tournament. The first day, although the proceedings went well, it was a little difficult to know who was next in line for a game or how many people were queued up to play each game. Players dealt with this amicably by asking each other questions such as “are you next”, “how many of you are in line for Dracula”, and “are you at the end for Spider-man”?

The tournament organizers must have known that even though the first day was amazingly busy, day two would be like Grand Central Station at rush hour. So, they made a simple move of furniture that worked to solve this potential issue. 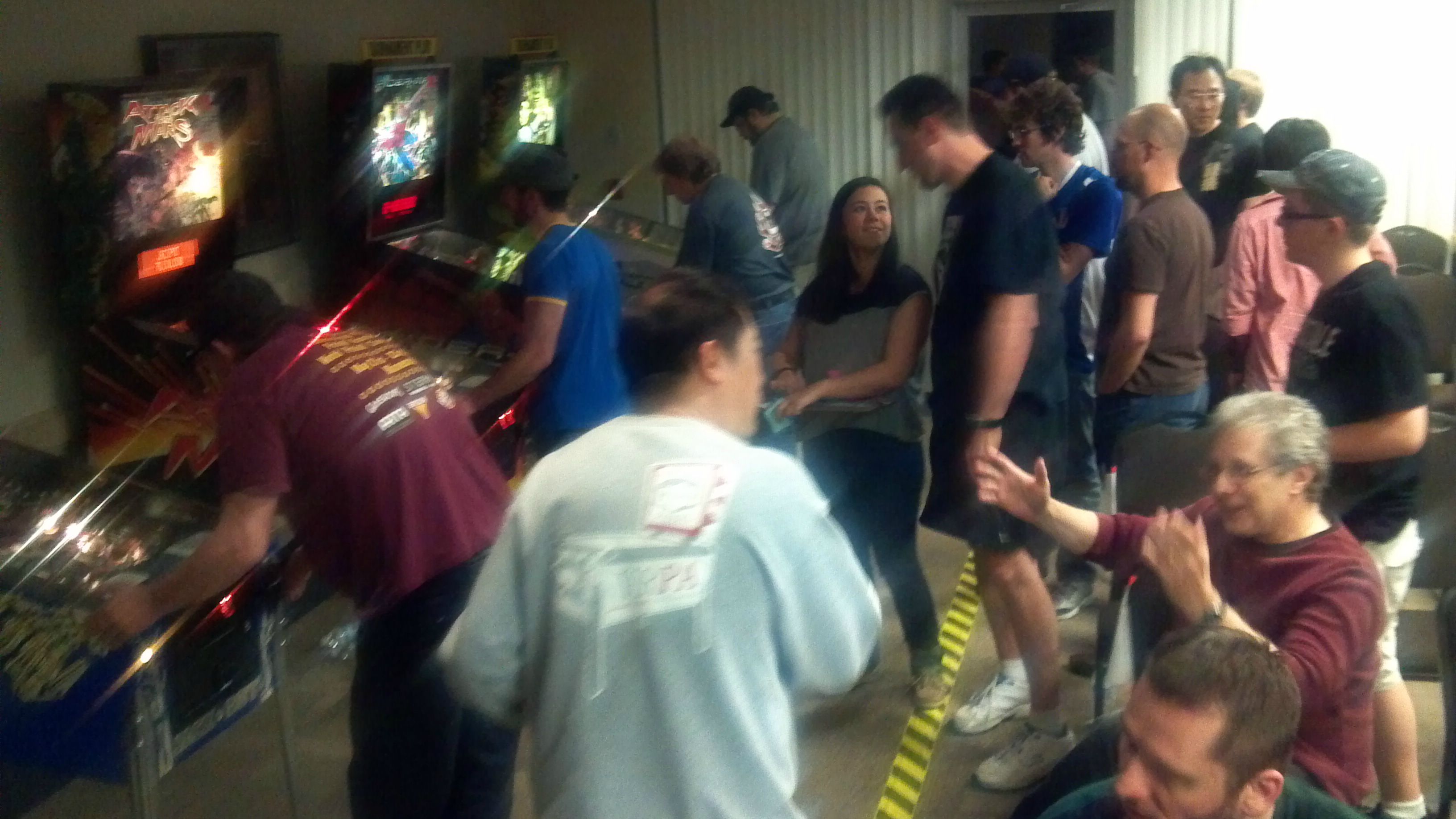 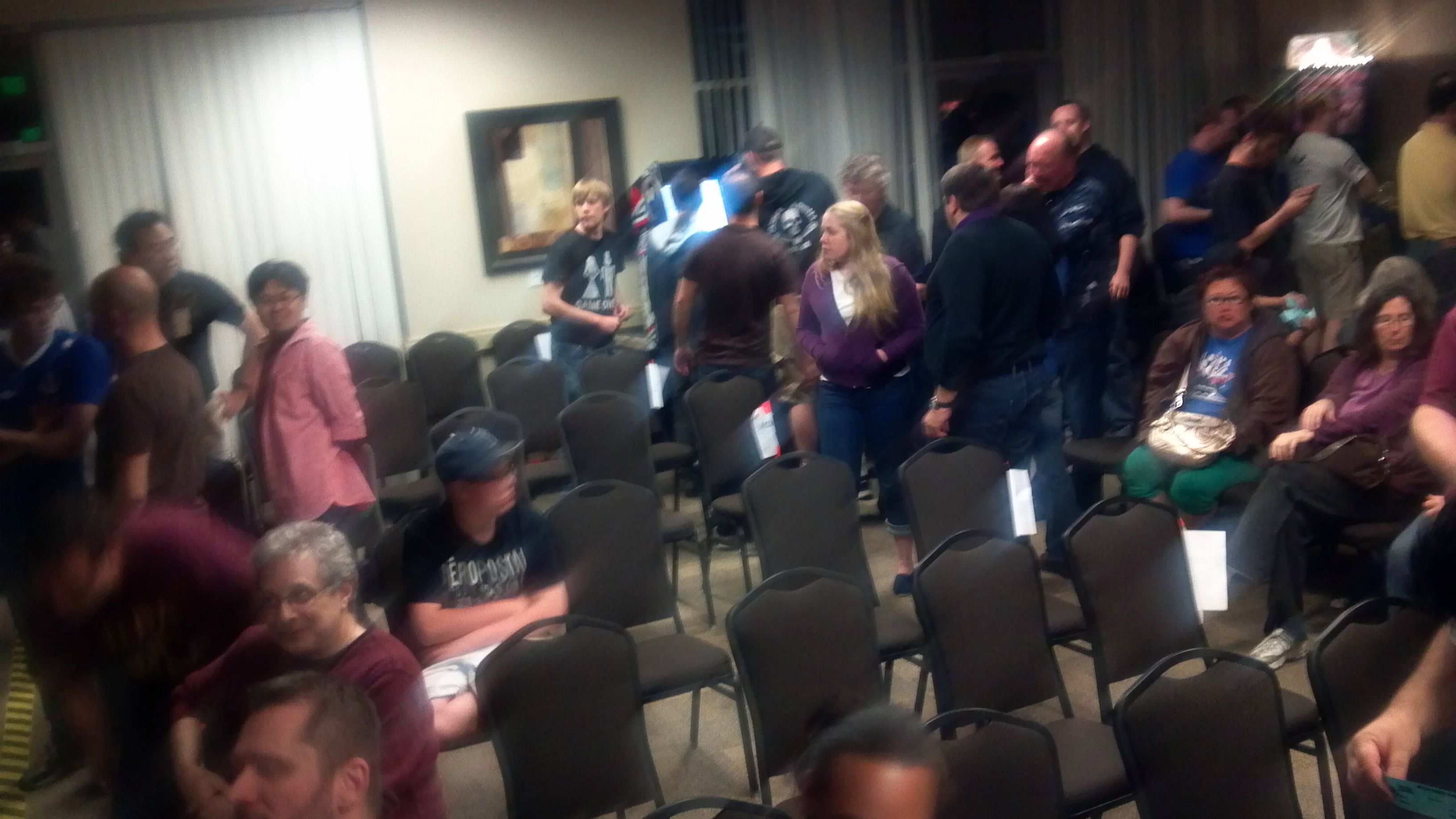 Welcome to the Pinball Division of Motor Vehicles. A row of chairs for each game, with signs clearly denoting which line was for each game. Now, you didn’t have to wonder who was next. Now you can see how many people were waiting to play. You could make your own judgement call to decide which game to play next based on how long you thought it would take. A four-person line on a game with longer play time like Spider-Man is not necessarily shorter than a six-person line on a brutal World Cup Soccer. There was not much need to ask someone to hold your spot because players could put their ticket on the chair to take a quick restroom break.

I remember something like this that almost happened at a previous PAPA tournament, but that was short lived…

(By the way, results are posted on Shoot here and here with the qualifying standings.)

On his way to winning the Classics tournament, Franck Bona had a pinball moment. A stuck ball, rested on the right inlane/outlane rail.

It was ruled that he could try to play it or have the ball dropped down the outlane to claim his bonus. He was unable to get the ball back into play but he still ended up with a first place on that game. 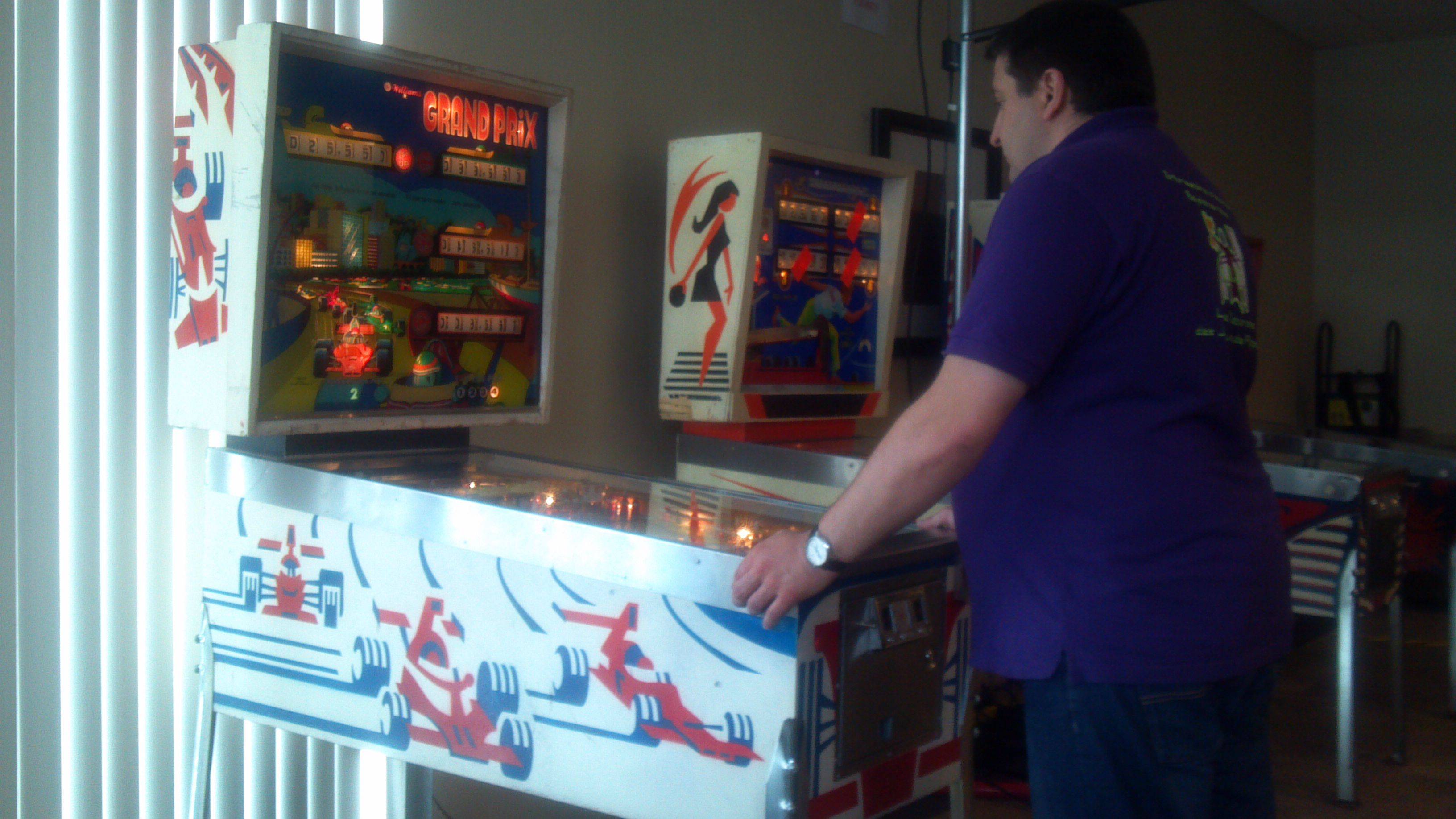 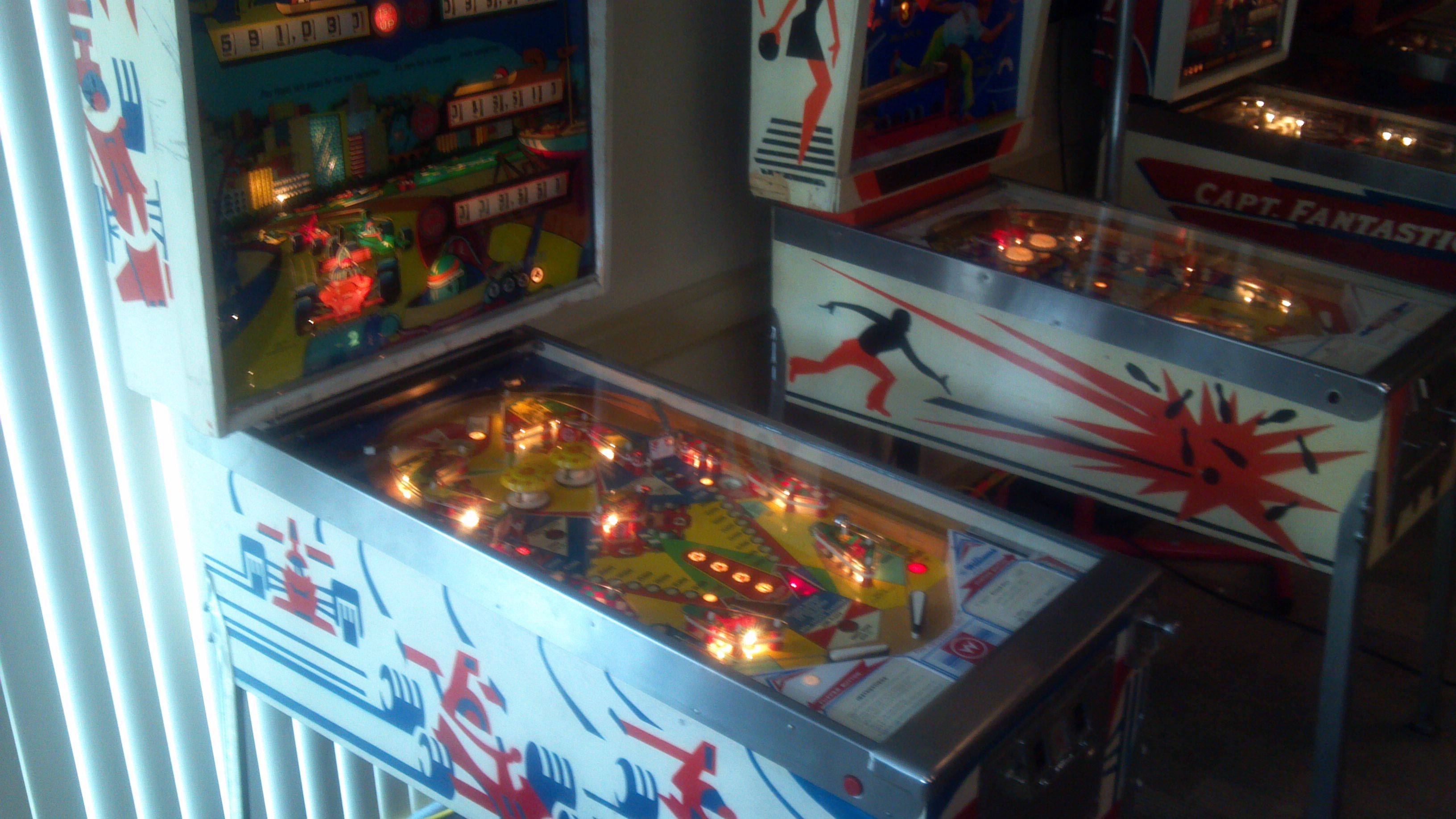 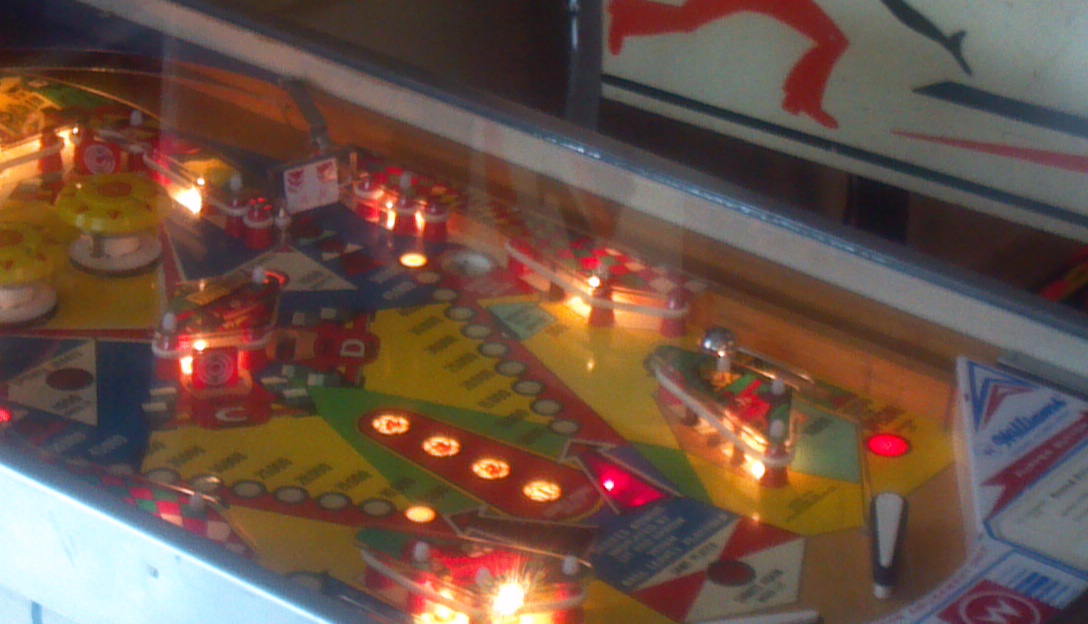 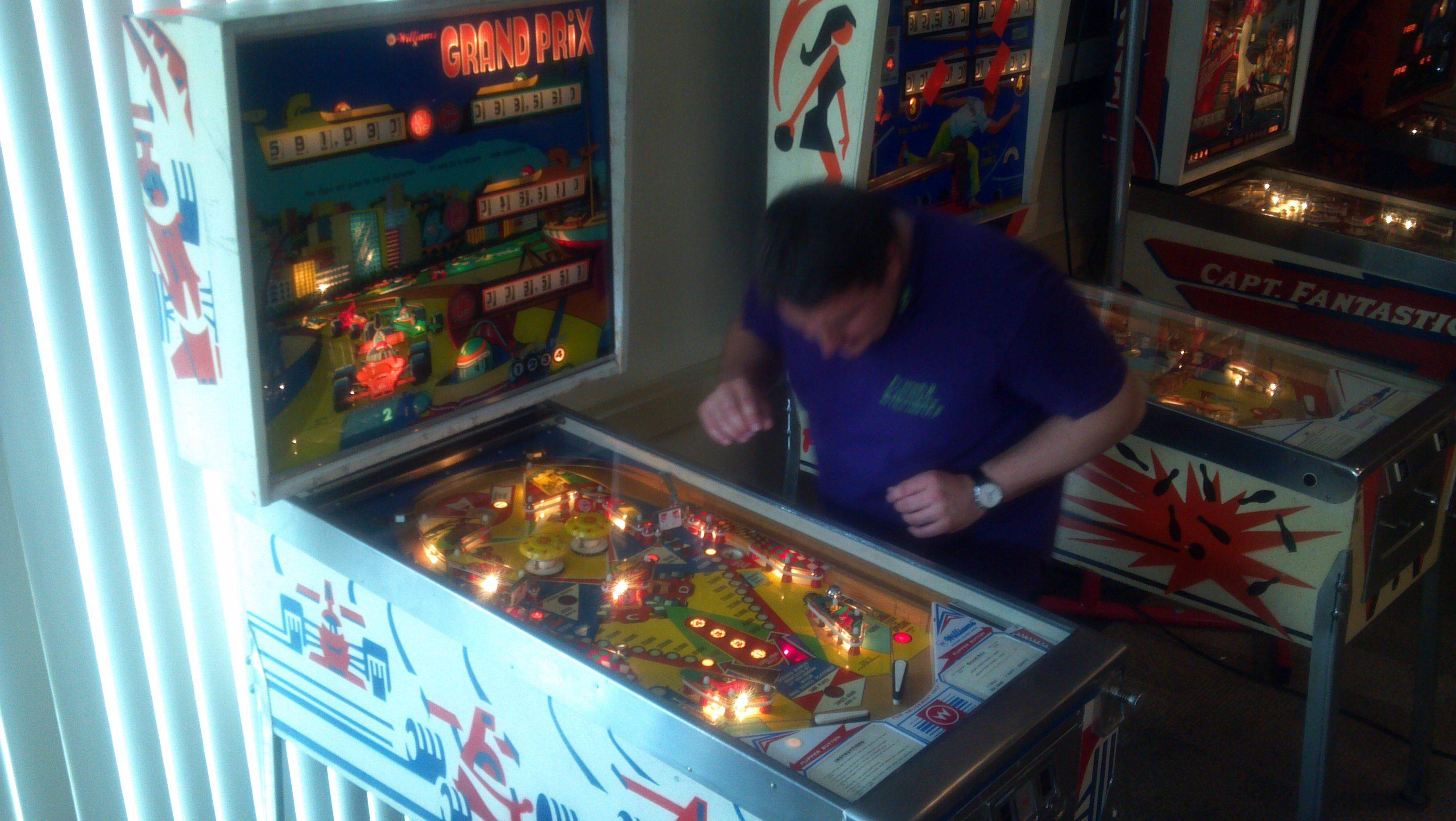 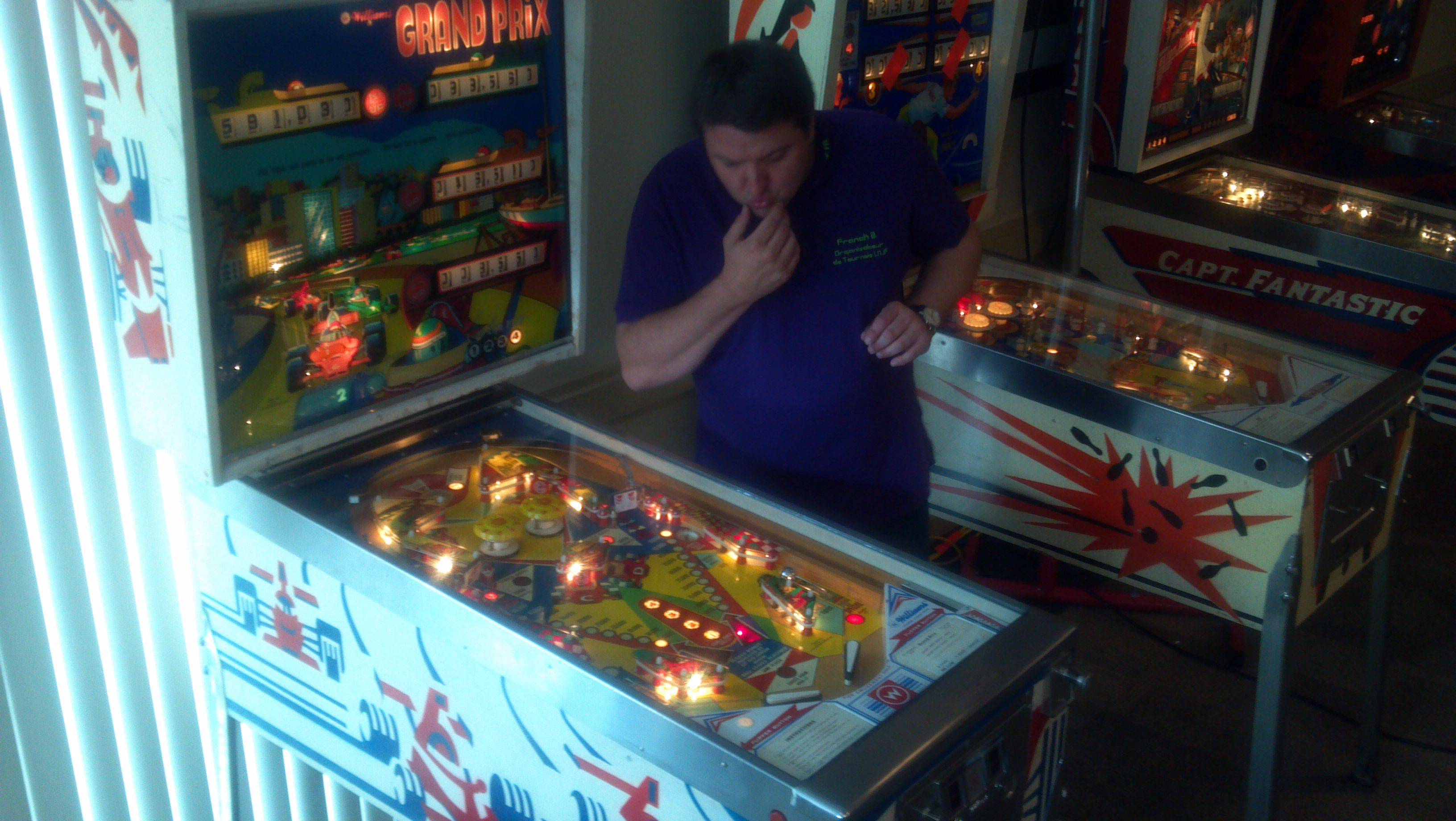 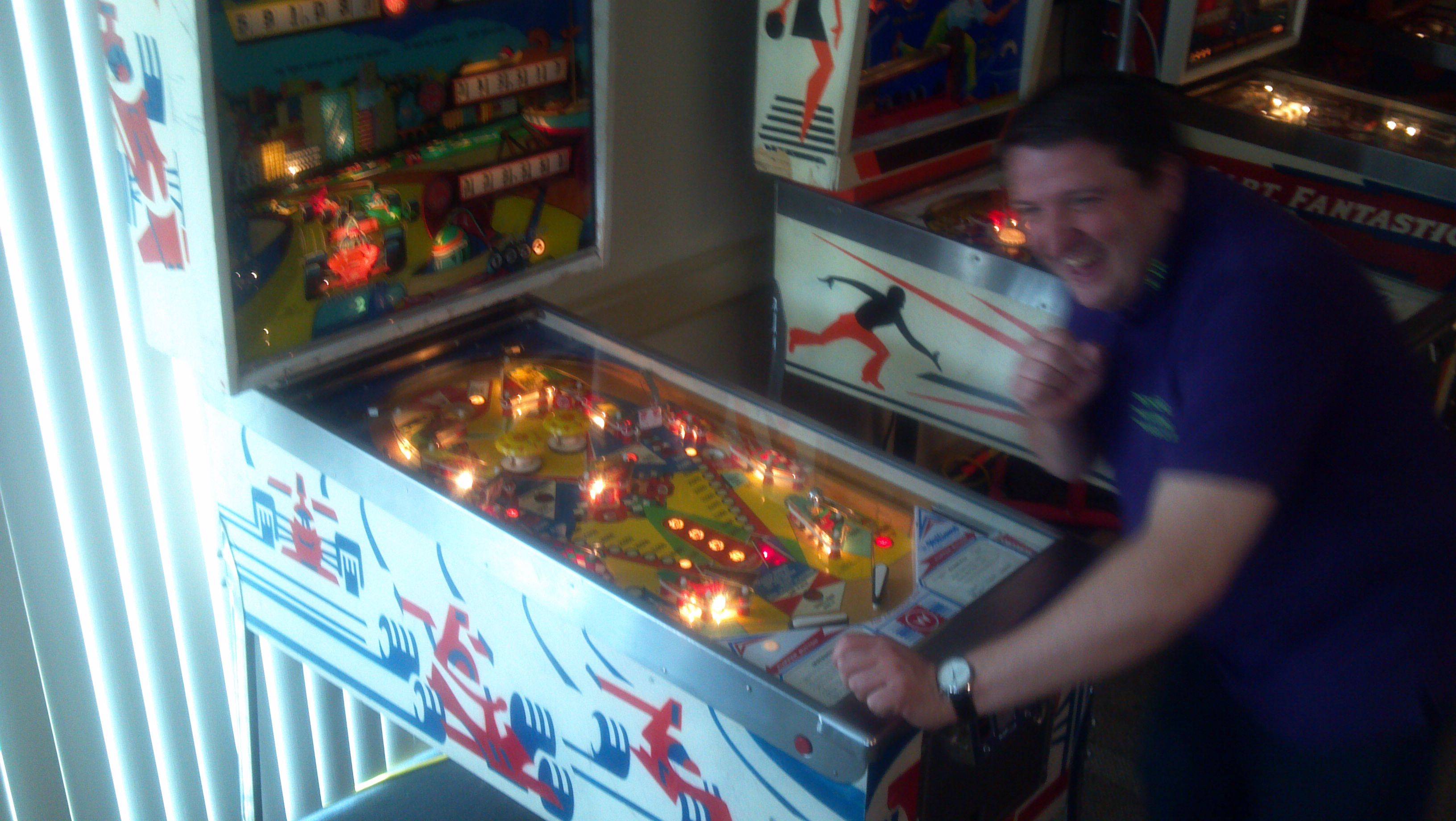 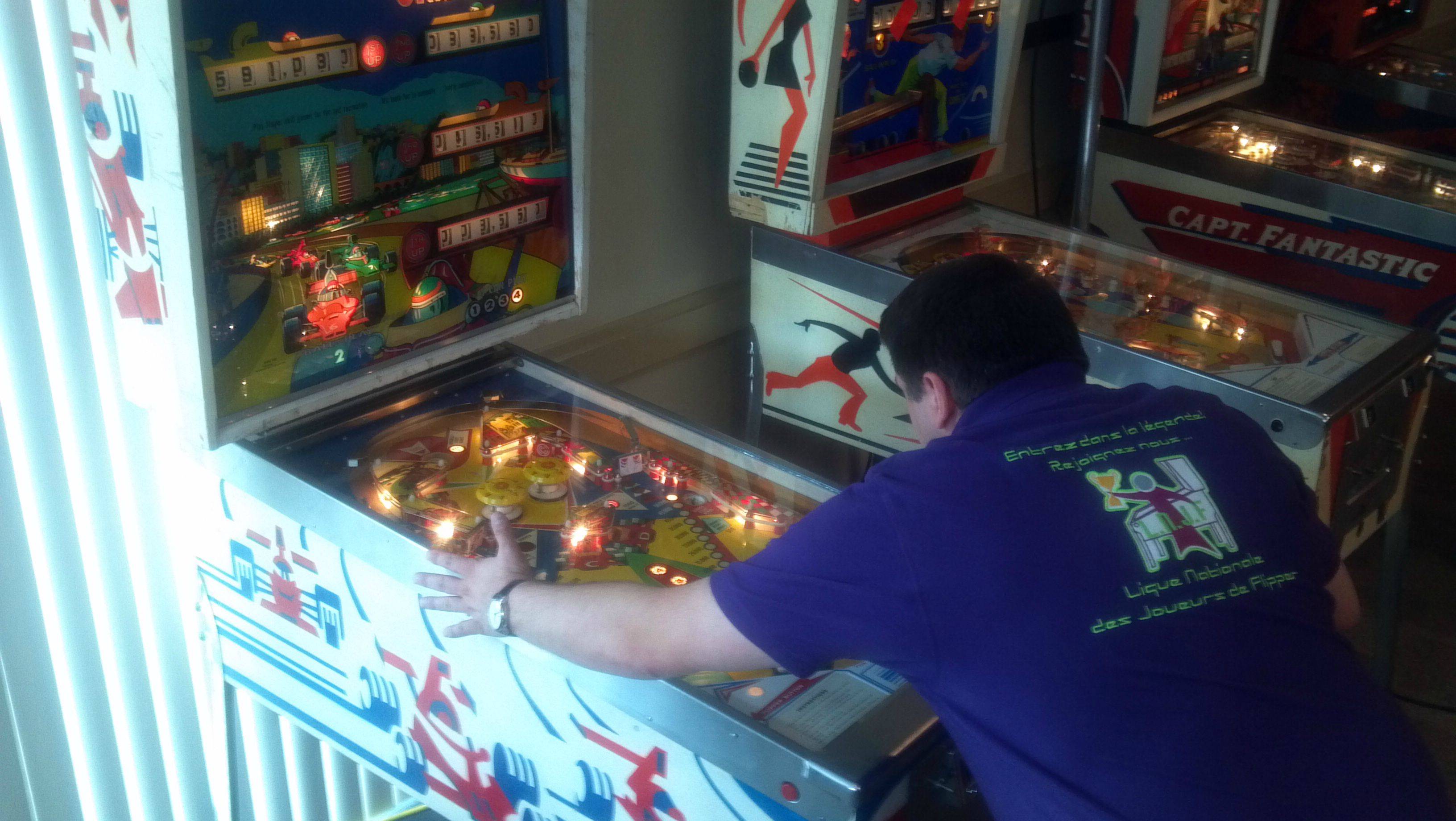 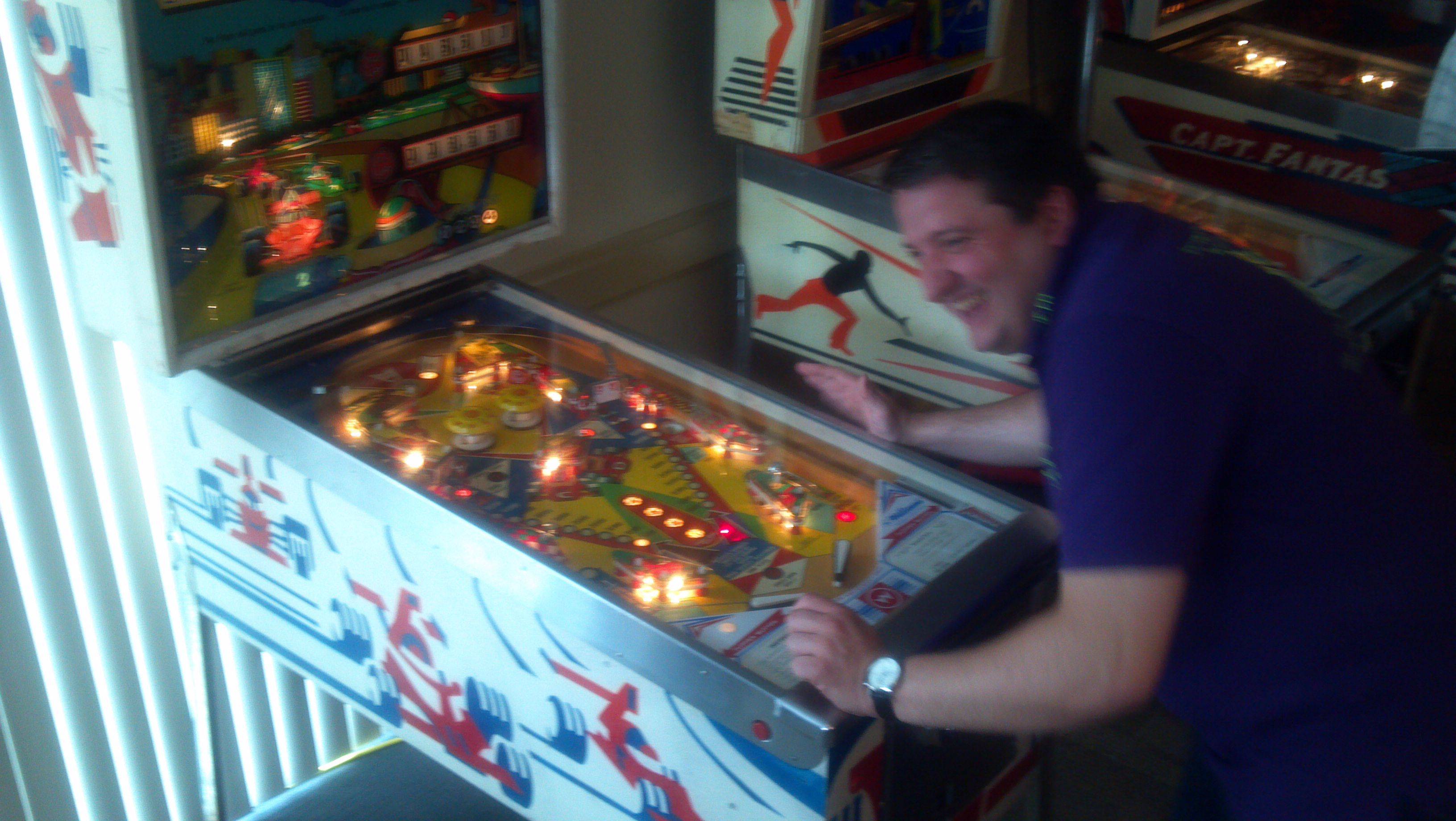 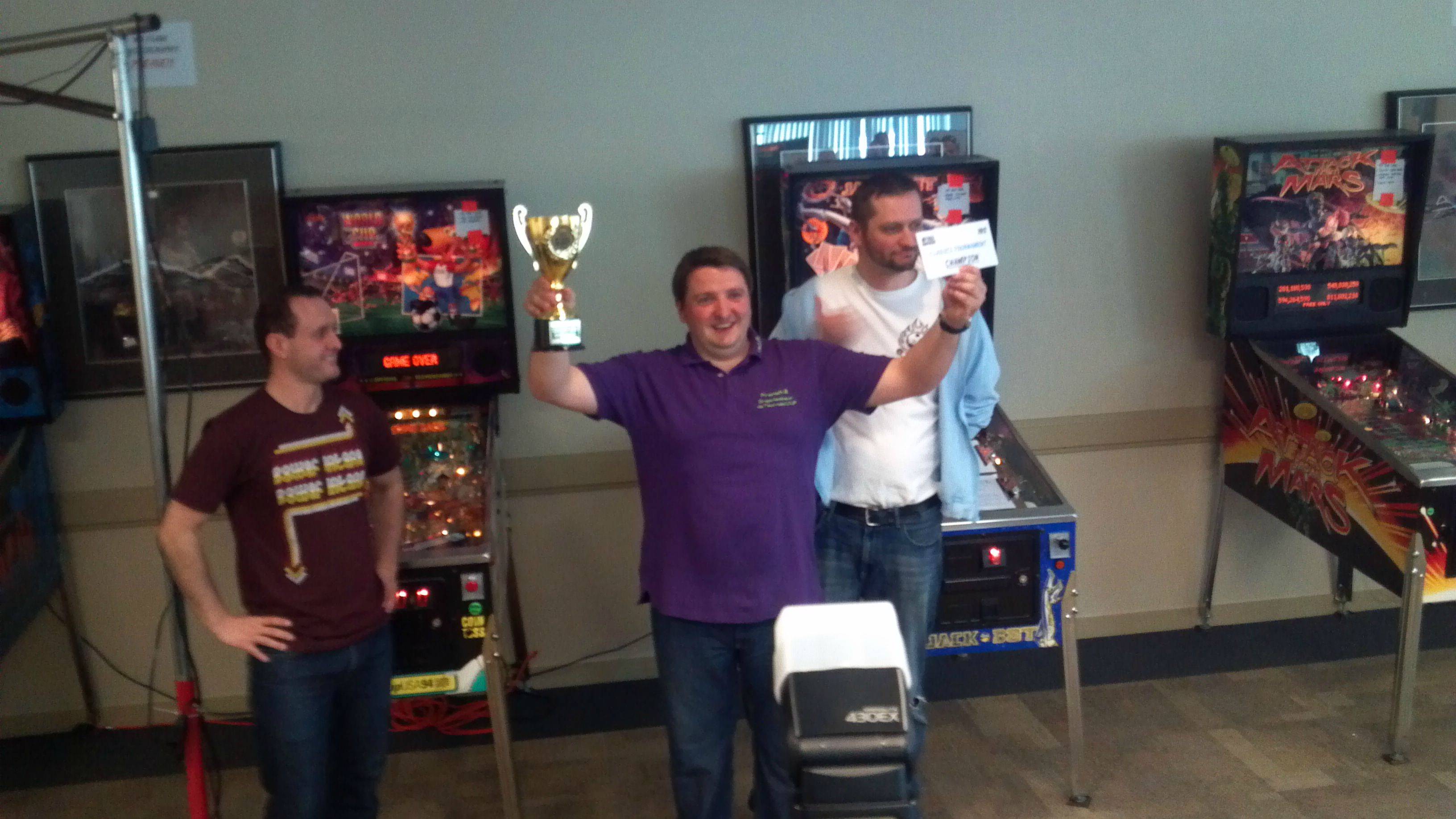 Cayle George and the Not-zero-point ball

Another peculiar situation happened during a game of IFPA Nine Ball. The game was giving players points at the start of some balls, sometimes 1,000 or 5,000 points. What happened here was that Nine Ball gave Cayle 1,000 points at the start of his ball and left the bottom target on the right side down. Cayle plunged and ended up hitting nothing at all. Usually if you hit nothing, you will get another chance. However, since the game did award 1,000 points due to that downed target, his ball was over.

This spawned some controversial discussion for awhile after the game was over because this was the last game of the Classics Final. If Cayle got to play another ball due to the strange event, he could score enough to win the game and the tournament. The ruling was that Cayle would not be allowed another ball. That made sense in my opinion, because plunging the ball equals consent and acceptance of the situation at hand. 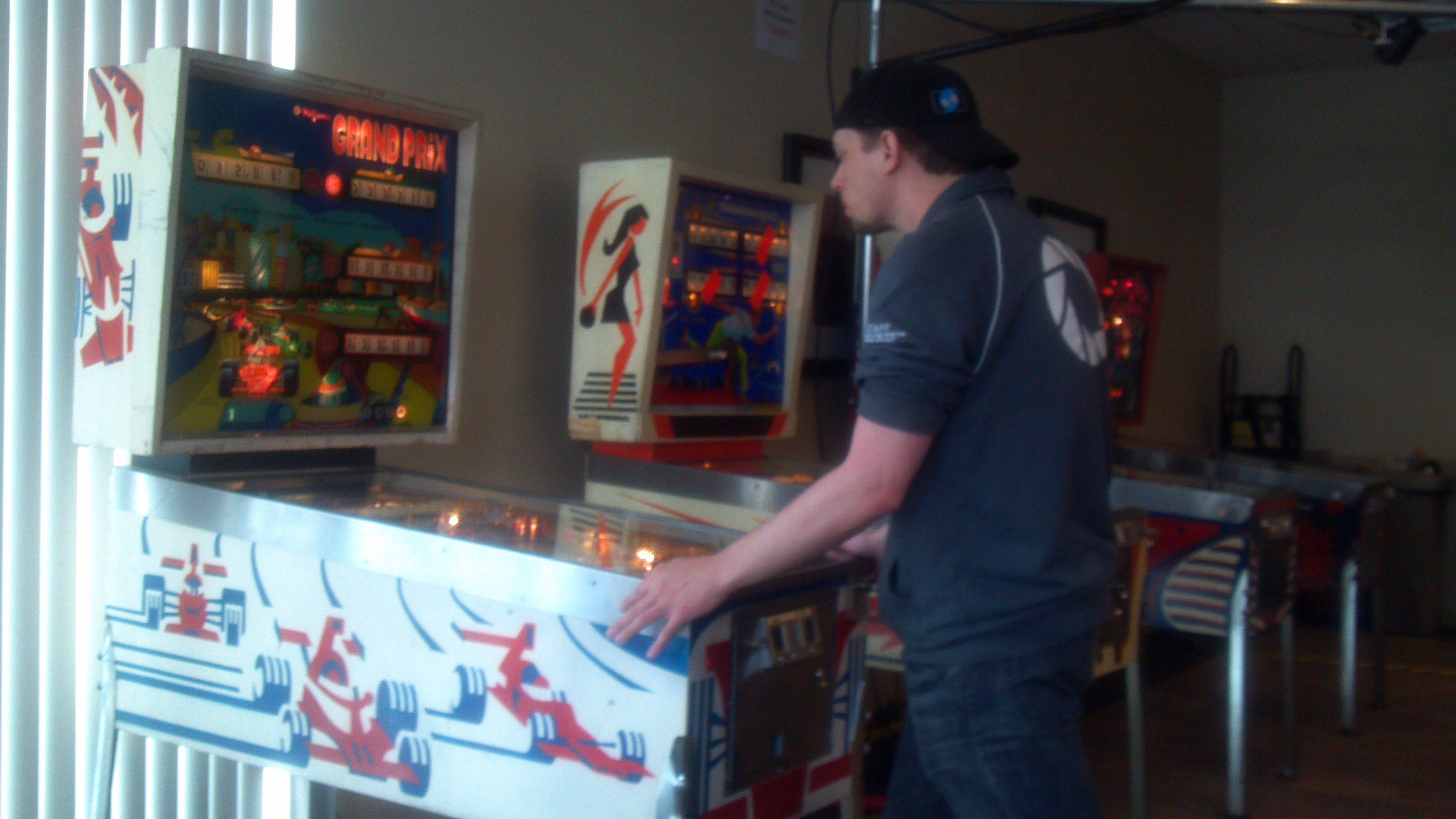 Cayle was able to secure second place in Classics by winning a tie-breaker on Grand Prix.

There was also a Whitewater tournament that was “mini” in more ways that one. This Whitewater was fitted with mini-flippers. The winner of the day-two mini tournament won over $280.00 in prize money.

How difficult could it be? Really difficult!

The eventual winner of the main tournament, Daniele Acciari, benefited from an unfortunate tilt from his opponent during the first round tiebreaker to get into the semi-finals. As he was draining while playing WCS94, Daniele’s opponent was trailing by about 15 million. However, he had a total of six goals which awards 30 Million in bonus. He must not have known this as he tilted away the victory.

All of the games, including this frustratingly difficult WCS94, were set with very tight tilts. Even a nudge out of reflex to save a ball could cause a tilt as it did in this situation. I, as well as players who were near me, did not know what to feel for a few moments after it happened. I can not imagine how Daniele’s opponent felt. 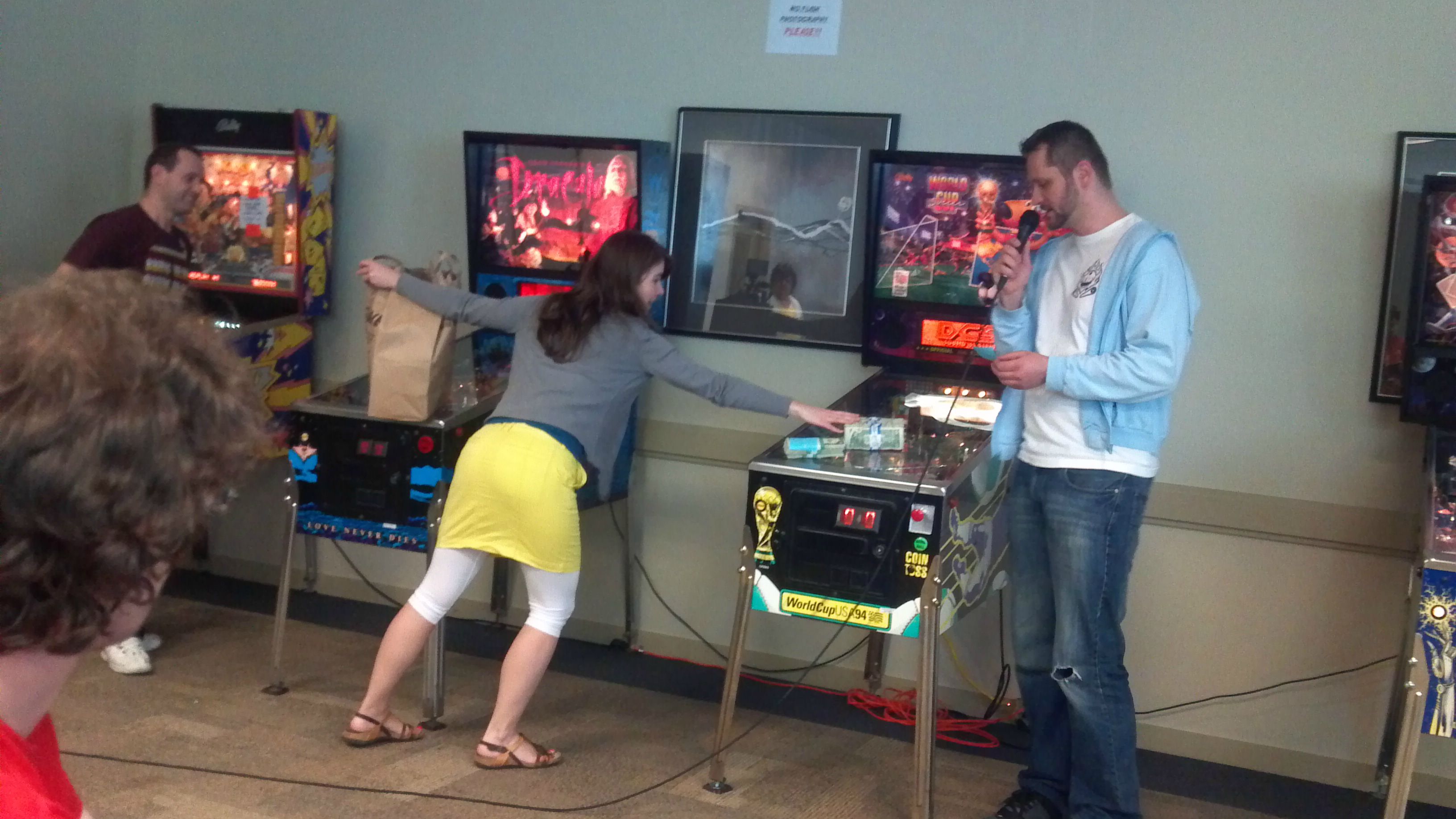 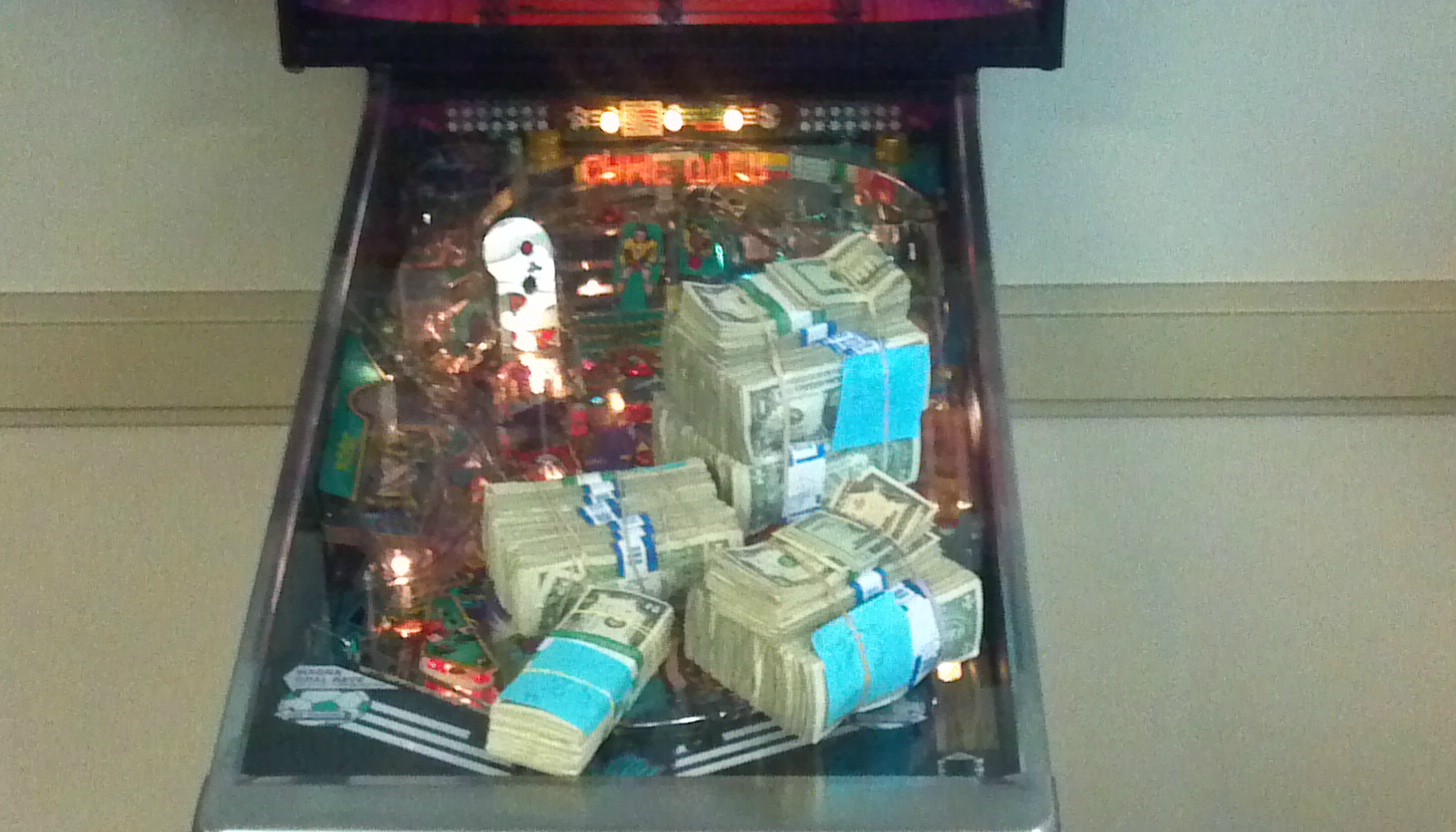 Cayle George, Daniele Acciari, Roberto Gagno, and, Lyman Sheats put on a display worthy of being live-casted over the Internet. A crew from Geek Gamer Network was on hand to make the event available for everyone to view on GeekGamer.tv. Bowen Kerins provided live commentary throughout the finals as the contestants battled. One of those battles included maybe the greatest Jack*Bot match ever recorded. 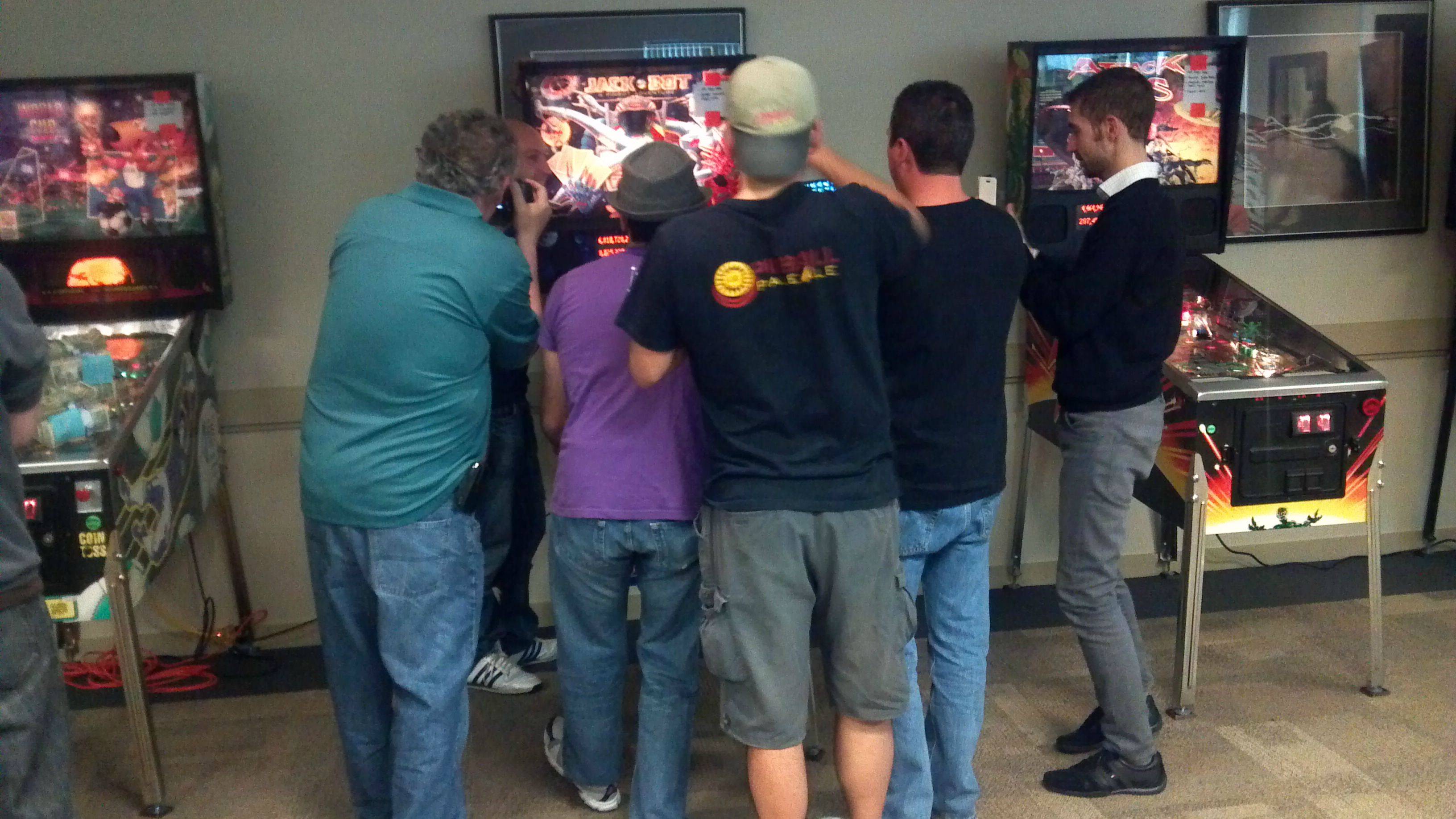 I hope that either Geek Gamer Network or the tournament officials will be able to release the video of this match as soon as possible, because it would be a video that you will not soon forget.

Cayle scientifically dissected Jack*Bot on his first ball. On his second Multiball, he was able to soft plunge, get the Cashier Jack*Bot (under the ramp) and still let the ball drain. It seems that the Cashier is not a major target at the start of the ball. The other two balls in PinBot’s visor remained there so the Multiball hadn’t started yet.

Then, he soft plunged again to try to get the Hit-Me target Jack*Bot as well. If you can do that and let the ball drain again you have a chance to do another soft plunge to regain control, or go for the Skill-shot Jack*Bot. All of this can happen before the ball officially starts. It’s great to find out something new about Jack*bot after all these years.

This was the second game out of three. Danielle took a zero in the first game. After Cayle’s first ball Daniele really needed to pull off something fantastic, and he did. He progressed all the way to the Mega Visor round and scored a Super Jack*Bot (750 Million) by completing the Mega Visor. He finished Multiball as the Mega Jack*Bot stage activated, but Danielle was not able to claim a Mega Jack*Bot. Danielle and Cayle scores were very close at the end of ball one. It was amazing to see Daniele come back after a game one loss and after being down so much at the start of game two. A very strong performance under a huge amount of pressure.

Player’s three and four (Lyman and Robert) were no slouches either. Each of them scored over 2 Billion points during this fierce battle.

UPDATE: I have just seen an post by PAPA that videos of the entire 3 game Grand Final will be posted on the PAPA blog over the next few weeks. 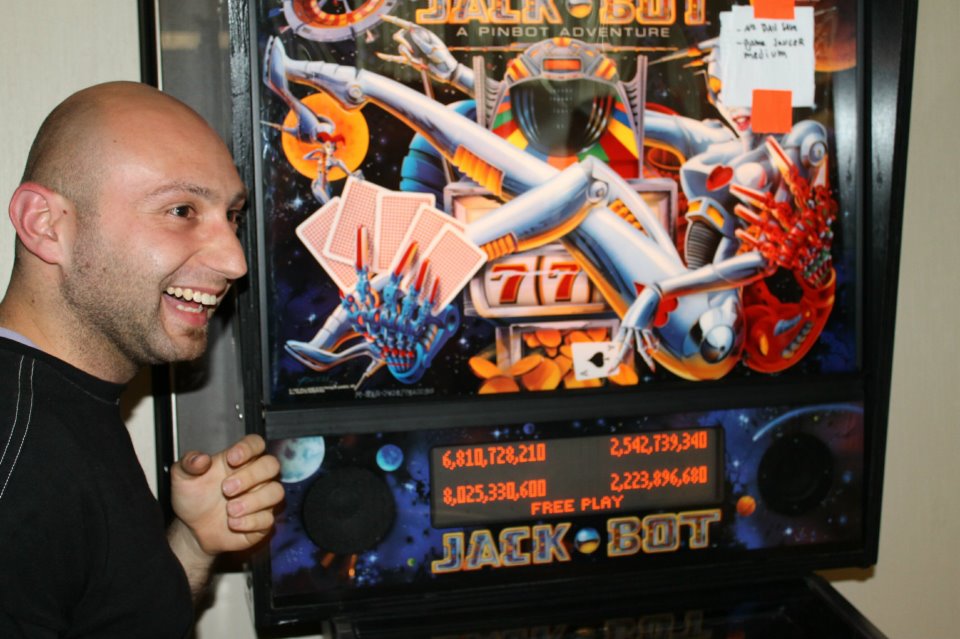 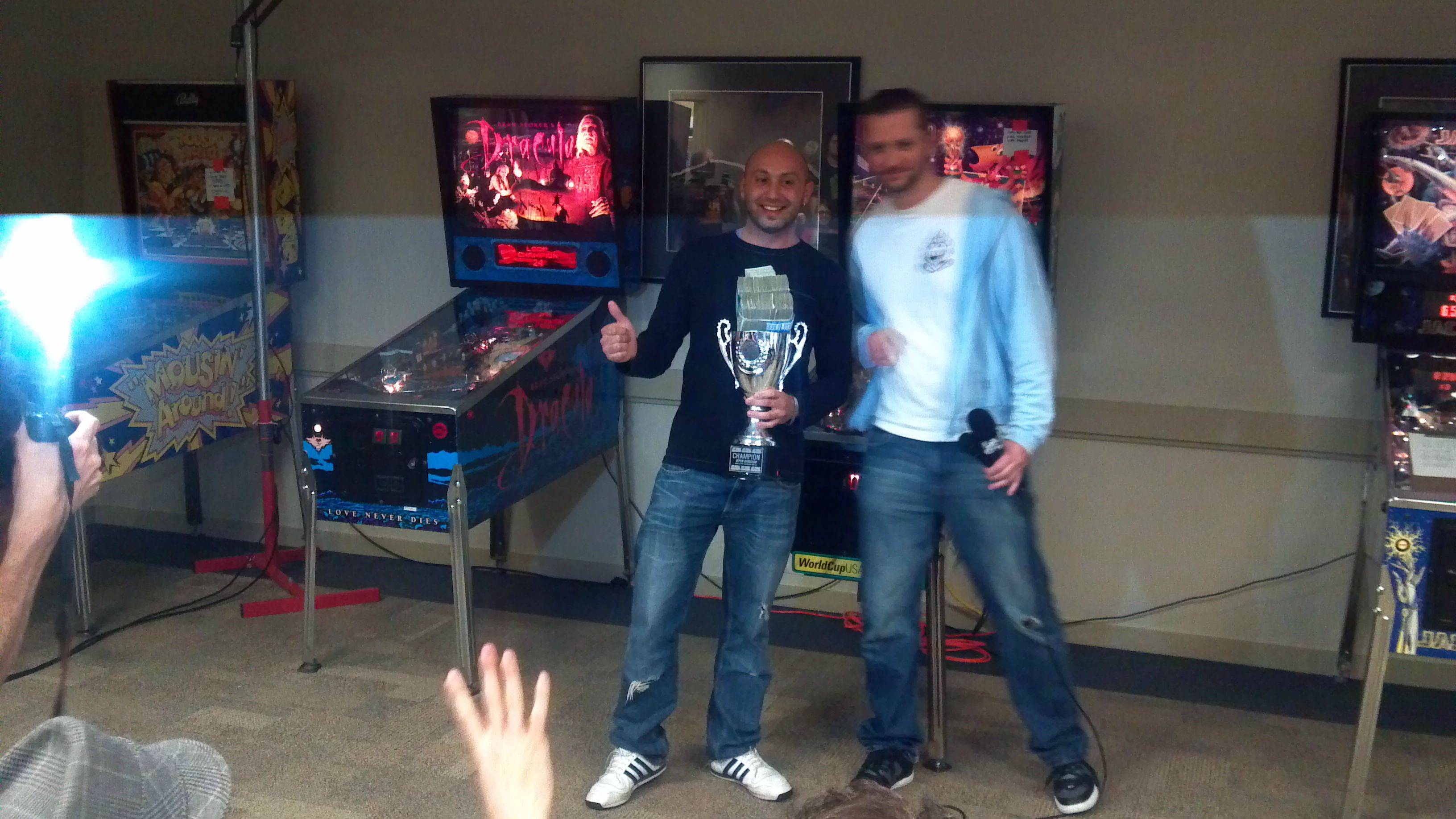 Overall, the event was a great start to IFPA Championship Week. There are more competitions to come!