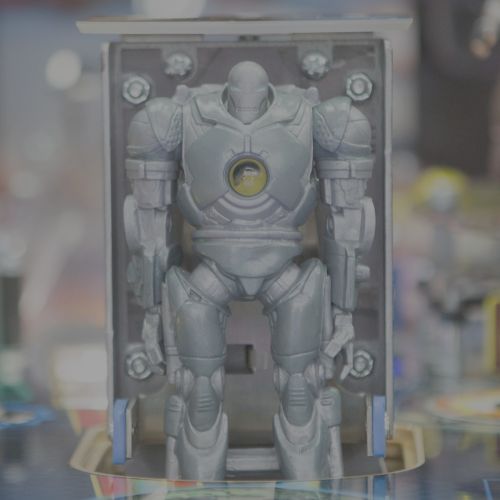 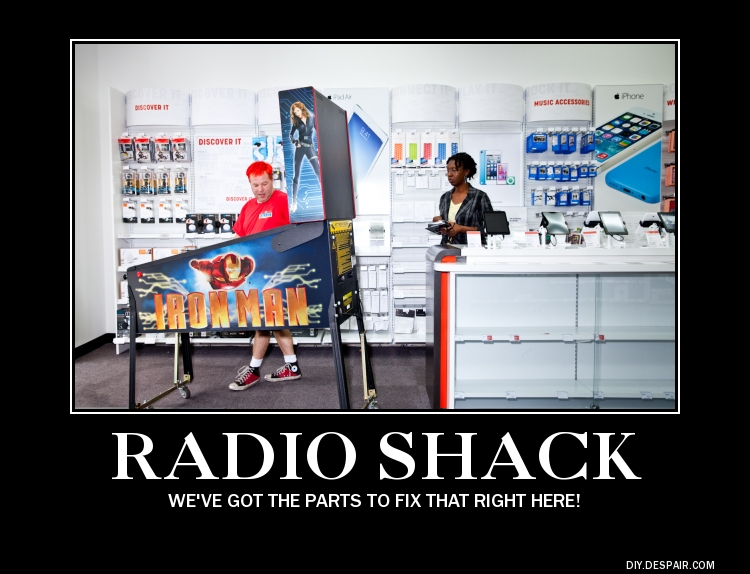 I think it just needs a fuse or something …

Pinball machines had been banned for 80 years in Oakland, California. But, no longer! Since Oakland has seen fit to finally remedy this senseless error, the Radio Shack in Oakland, CA is having a celebration in the form of a FREE pinball tournament on a Stern Iron Man Vault Edition. The winner receives gets to keep the game!

It runs for 30 days from August 20th to September 19th, 2014 at the Fruitvale Station Radio Shack location: 3040 East 9th Street, Suite A. No quarters are necessary. Just step up and play.

Make sure you bring your skills though. In order to qualify, you need to score at least 50,000,000 points. That’s no easy feat on one of the toughest pinball games in the hobby. If you don’t know what “Do or Die” is you are going to need to know in order to qualify for the final rounds. To activate Do or Die, you need to start each of the games major modes once during the same ball. They are:

Drone Targets: Hit enough drones. Each drone target is set in a dangerous location that will put your ball in jeopardy. So be ready if you hit one.

Iron Man Targets: Complete the left and right side targets to activate a scoring mode.

Iron Monger: Shoot the spinners to raise the Monger, then hit the Monger six times to start Iron Monger Multiball.

Whiplash: Shoot the two-target bank/magnet in the middle of the playfield enough times to start Whiplash Multiball.

It is possible to use War Machine Multiball to work towards Whiplash. Start War Machine first before going after that dangerous center magnet.

If you can do all of this in one ball, the center spinner will light to start Do or Die. Shooting it will start a hurry-up round that starts at 35,000,000 points and counts down until you collect it by shooting the center spinner again.

At this point you probably have or are close to the 50,000,000 points you need to be eligible. After that, the goal becomes seeing how far you can take the game to advance up the ranks. Can you get to Mark 6 and start the intense, high scoring Jericho mode?

From the press release (Hat Tip to Chris Kooluris):

OAKLAND, Calif. – August 20, 2014 – For 80 long years, residents of Oakland were banned from playing pinball because the game was viewed as illegal gambling. All that changed last month when the city’s long prohibition on pinball was finally lifted. To celebrate this momentous occasion, RadioShack and Stern Pinball are teaming up to host a month-long pinball tournament inside RadioShack’s new Interactive Remodeled store in Oakland.

Kicking off on August 20, RadioShack will place a brand new Iron Man Pro Vault Edition machine in its Fruitvale Station store location, with help from Stern Pinball and the International Flipper Pinball Association (IFPA). Participants are welcome to play for free and test their skills, no quarters required and no purchase necessary. More than mere bragging rights are on the line; whoever wins the tournament, wins the machine as a grand prize. Here’s how the tournament will work:

“Friends in the Maker community and other loyal customers inspired us to celebrate the return of pinball in Oakland. The pinball resurgence is a perfect combination of the best of retro and future technology. We thought this tournament would be a fun way to help celebrate our opening of 21 interactive remodel stores in the San Francisco and Oakland area,” said Mike DeFazio, senior vice president of store concepts at RadioShack. “The game is legendary and has appeal for experts and novices alike. While you are in the store enjoying our new interactive elements like the speaker wall and 3D printer, take the time to play a game with us!”

“Along with our friends at RadioShack, we’re obviously psyched to see pinball prohibition end in Oakland,” said Gary Stern, CEO, Stern Pinball. “Our company has origins in the pinball industry that date back to the ban’s enactment itself. We’re both honored and amazed to see brands like RadioShack embrace pinball, and help make it more accessible to a new generation of fans.” 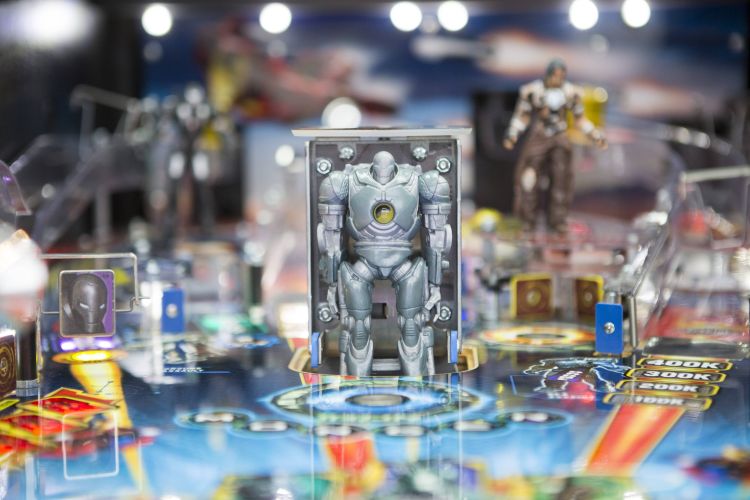 If you want to showcase your pinball skills for a chance to win your own pinball machine, simply visit RadioShack starting August 20 at 3040 East 9th Street, Suite A. The tournament runs for 30 days, with the last chance to qualify on Friday, September 19 by 9:30 p.m. PT and a Grand Finale on Saturday, September 20 at the same location. The highest scorer on the machine in the Grand Finale will have the honor of taking it home. For more details and rules, visit the RadioShack TechSpecs blog, and follow us on Facebook and Twitter.