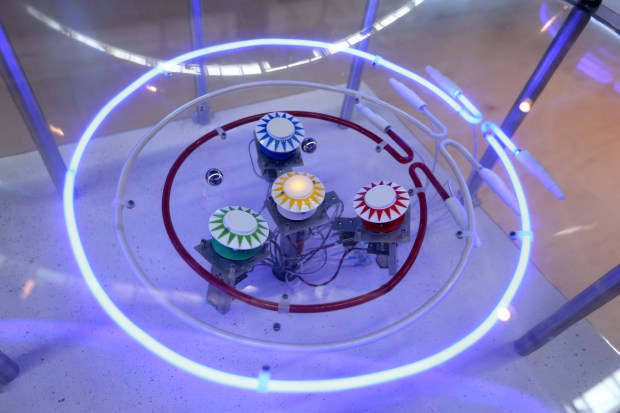 The documentary is available for free viewing on YouTube Movies. Officially. An authorized upload and everything.

Special When Lit rediscovers the lure of a lost pop icon – pinball. The American invention made more money than Hollywood through the 50s and 60s. Its success swept the world making it the epitome of ‘cool’. But now pinball is all but forgotten. This is the definitive story of the rise and fall of pinball as told by the fans, collectors, designers and champion players from across the globe. Its history is charted with a series of uniquely stark and entertaining interviews with some of pinball’s greatest names. A game, a sport, a lifestyle – pinball takes this eclectic bunch back to their youth. It seems at times like an emotional and sensitive area, with the fans describing the game like a relationship, their faces lighting up as if they were recounting their first kiss. Archive footage of former US news anchorman Dan Rather opens the film from a 1977 60 Minutes segment on pinball. ‘I spent an incredible amount of time at gas stations, honky tonks and other off the beaten path places trying to appear cool…while obsessively following the descent of a steel ball down the playing surface of a garishly lit machine…a pinball machine”. Pinball was everywhere. But now pinball is virtually nowhere. Kids don’t even know what a pinball machine is. Their world is online, not at the arcade or corner store. The fate of pinball seems decided yet there exists a passionate sub culture keeping the dream alive. Roger Sharpe, pinball authorative, tells the story of Pinball’s early rise to prominence in the Depression era, its eventual banning by the US Government for 30 years, the boom time in the 1970’s, and eventual defeat to video games. Living through the industry ups and downs, legendary game designers Steve Kordek, Steve Ritchie and Pat Lawlor reveal the inner workings of a game that fuses the mechanical and electrical ages. From a primitive steel ball rolling around on a flat piece of wood, designers craft a game based on the simple premise – easy to play, but hard to beat. And crucially, the collectors who feed off the designer’s handywork all crave one thing – more space. But pinball is a game with a score. And where there are scores there are competitions. ‘The Storm’, a stockbroker from New York City, confesses that you have to ‘build up your pinball muscles’ in order to compete at the highest level. From the European championships in Amsterdam and Sweden, to the World Pinball Championships in Pittsburgh, and a smattering of amateur backyard tournaments in between, Special When Lit shares the tension, dreams and disappointments of pinball’s tournament players. Rick Stetta, former World Champion, entertains with his flamboyant playing style, while current legend Lyman Sheats Jr. counters with ice-cool precision. Each to his own in a contest that is as much a mental game as physical. But it is in the final story of former arcade owner, Steve Epstein, who ran the famous Broadway Arcade in midtown New York City, that sets the inevitability of pinball. Describing pinball as a ‘universe in a box that is a lot like life – you never know what is around the corner’. Pinball was more than coins in the slots for Epstein, it became his whole social life. In a time where we can instantly access any song or movie from our past, pinball offers a throwback to a tactile physical experience that can’t be digitally reproduced. We now share our fun in a different way, but have we lost something in the process? Special When Lit recounts an alternative love for a game which brought out a wealth for memories for many generations but also the sad dissolution of what could be described as a certain way of living and playing. Perhaps pinball deserves a better fate than simply a nostalgic footnote. Whatever the future, Special When Lit will leave you searching for an arcade to line up your coins and master the silver ball.