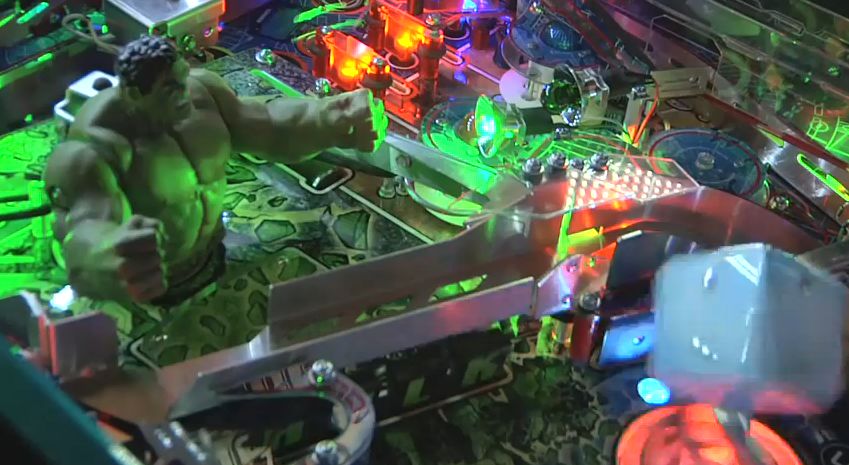 The first of hopefully many videos of STERN’s upcoming table. Designer George Gomez details some of the features of the game.

There is more detail video coming in the next few days. Also in watching myself a couple of things need clarification- Advancing Avengers is done by building the 4 lights and Avenger features are not “modes” in the traditional sense, they are not timed and they carry over. We’ll be showing the game with sound fx and voices in the next videos – minus my voice over. You see some of the Pin because I’m human and I had to design 2 Pin models and a Pro and Le version of Avengers. Coincidentally the cosmic cube and the all spark are cubes in the fiction, so it seemed like a natural. Only other similarity is the rear ramp entrance on the left orbit.

On strategy: start lots of Avengers and hold off starting HULK multiball until then. Thereby using the 6 ball m-ball to advance and finish Avengers- lots of points there. Also some interesting ways of blending the Tesseract into things. All Avengers have Vs. modes which occur after you have collected an Avenger.

Once you collect an Avenger the next time that you build him up since you’ve already collected him instead it starts a Vs. mode. Avengers are paired based on history of the fiction and the pairing is scripted meaning that Hawkeye’s Vs. is the Widow, but the Widows is HULK, etc. I don’t want to give too much more away because discovery is part of the fun.

^^^WHY DIDN’T THEY DO THIS FOR X-MEN?!^^^ There are some mutant modes and villain modes in that game that go together. Wolverine and Sabertooth for one.