Who?dunnit should have been CLUE: the pinball game. 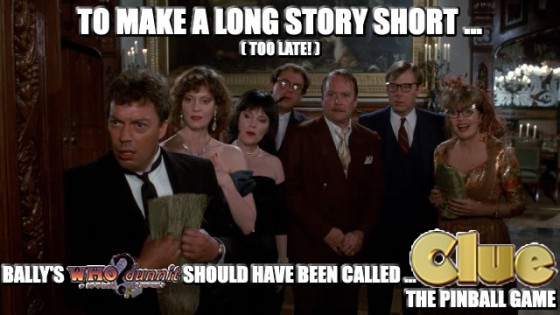 Thanks to @LorienGreen and Bucci’s Arcade for pointing out that there is an actual backstory to Who?dunnit by Bally. Look at this story below that you have little to no exposure to in the actual gameplay.

What happened to make this game NOT Clue: The Pinball Game? I thought it was when I first played it years ago. Who?dunnit just puts in a casino atmosphere so that you have slot machines and other pinball-like targets to shoot and collect.

Maybe Parker Brothers didn’t want to give a license for it? I mean, come on! Tim Curry is right there in the movie! He was in The Shadow and Congo. Both good games based off of sub -par movies. But the movie Clue was great in that “bad-movie” great kind of way. Bally would have sold a lot more games.

After having done some further research (on IPDB) I see that The Shadow was released in November 1994, Who?dunnit came out in September 1995 and Congo shipped in November of 1995. So Who?dunnit was in between two other Tim Curry games! This was truly a missed opportunity, here. 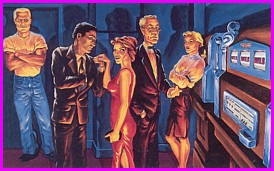 WHO DUNNIT? TIME LINE
As written in the WD? manual

Walter, a young wealthy playboy, and Mia, wife of the English Ambassador have a fling. They conceive VICTORIA, a secret VICTORIA’S mother keeps. She doesn’t tell him before she leaves never to see him again.

TRIXIE’s mom dies giving birth to her. Tex is forced to be a single parent.

Walter comes to town, meets TONY, and they become partners. They start the W&T PALACE, a struggling casino. TONY then cheats Walter out of his half of the casino and Walter disappears.

Walter returns to Europe to find that VICTORIA’S mother has died and that VICTORIA has grown up in a boarding school. VICTORIA looks amazingly like her mother. Walter can only think of how much he loved Mia when he sees VICTORIA. Walter changes his name to BUTLER. He tells VICTORIA that he used to work for her mom and she hires him as her manservant. BUTLER, trapped by the memory of Mia, does whatever VICTORIA says. VICTORIA treats BUTLER like dirt….as she does most everyone.

BUTLER suspects the fate of all his daughters’s past husbands and encourages VICTORIA to go after TONY. VICTORIA shows up with BUTLER. VICTORIA and TONY have been lovers off and on for a couple of years. TONY still avoids her grasp. VICTORIA marries Tex, her Third husband. She becomes TRIXIE’S stepmother. TONY doesn’t recognize Walter because BUTLER is the shadow of the man Walter was and looks 10 years older. 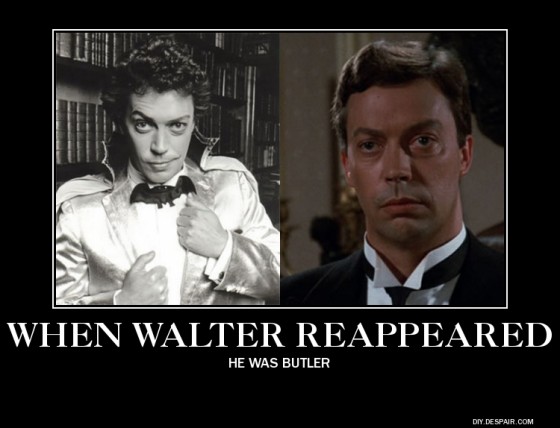 VICTORIA and TONY conspire to kill Tex. The plan was: VICTORIA gets the money and TONY gets the Casino. Tex overhears VICTORIA’S half of the conspiracy. When she hangs up the phone he roughs her up and threatens that if anything happened to him she would be sorry. BUTLER witnessed Tex roughing her up. Unknowingly to VICTORIA or TONY, BUTLER sabotages the brakes of Tex’s car. Tex drives off a cliff. Car explodes. Body was never found.

Tex, injured and disfigured, makes it to an underground doctor/plastic surgeon. Tex is reborn as Bruno. Bruno has one agenda, to get VICTORIA for attempting to kill him. No one will get in his way.

TRIXIE, now 11, moves in with TONY. VICTORIA can not be tied down with a child. TONY is the closest family that TRIXIE has. She resents VICTORIA for this and still has a crush on TONY.

TONY and VICTORIA each believe that the other did the brake job on Tex. VICTORIA and BUTLER leave

for Europe in search of another husband for VICTORIA.

TRIXIE and TONY are lovers but TONY will not commit. TONY gives her a job at his Casino. He keeps her on a string, never letting her get enough money to be free.

TONY, unknowingly, hires Bruno to work for him. Bruno wants to be close because he knows that sooner or later VICTORIA will show up, and he wants to keep an eye on TRIXIE, his daughter. TRIXIE has been his only reason to live on some dark lonely nights. Bruno keeps a locker full of TRIXIE pictures and news clippings.

Bruno waits for the day that he can extract his revenge on VICTORIA and TONY.

TONY thinks all is well and is ready to enjoy the good life that he deserves.

TRIXIE has finally learned that TONY is not to be trusted and she must do what it takes to protect herself.

VICTORIA and BUTLER show up to try and snag TONY once more!

— copy-pasta from Bucci’s Arcade and the Who?Dunnit rulesheet by Scott R. Tiesma