American Pinball announces their fourth game, Legends of Valhalla by Riot Pinball! The game is available to play in certain public locations now! See This Week in Pinball for the complete details.

Go to This Week in Pinball for the Deep Dive into their newest game!

Are your skills sharpened for battle?

Legends of Valhalla, designed by Riot Pinball, is the 4th American Pinball title. Legends of Valhalla is an immersive pinball machine which brings the player into the world of the Norse gods and other Viking mythology. The game is a standard body design, utilizing three flippers offering a variety of fast and unique shots, including 3 metal ramps. The game rules have a variety of objectives that the player must either start or complete as they work their way through the game attempting to not only reach the wizard mode Valhalla, the majestic hall of dead Vikings, but also advance to the final epic battle known as Ragnarok, the super wizard mode.

Legends of Valhalla has 16 intricate modes programmed in the form of Viking legends for players to explore along with many multiballs and several mini features that are unlocked during specific actions while playing the game.

The game also exhibits a couple of fun playfield features such as the Kraken, which grabs the ball via a hidden magnet mounted underneath the playfield and flings it around in chaos. Also featured is a Viking ship where the player builds their army by locking balls inside to begin multiball play. Additionally, Thor’s hammer, which is mounted on the back panel and activated by a 3rd flipper button, comes crashing down onto the ball which is held by a magnet just over the top lanes, simulating a dramatic lightning strike, adding to the gameplay experience.

CHICAGO, October 23, 2021 — American Pinball Inc. (API) adds their fourth game, Legends of Valhalla to their growing lineup of pinball machines for arcades, homes, and collectors. American Pinball, Inc., makers of collector-quality pinball machines for the arcade and home markets including Houdini – Master of Mystery, Oktoberfest – Pinball on Tap, and Hot Wheels, is proud to manufacture Legends of Valhalla designed by Riot Pinball, LLC. 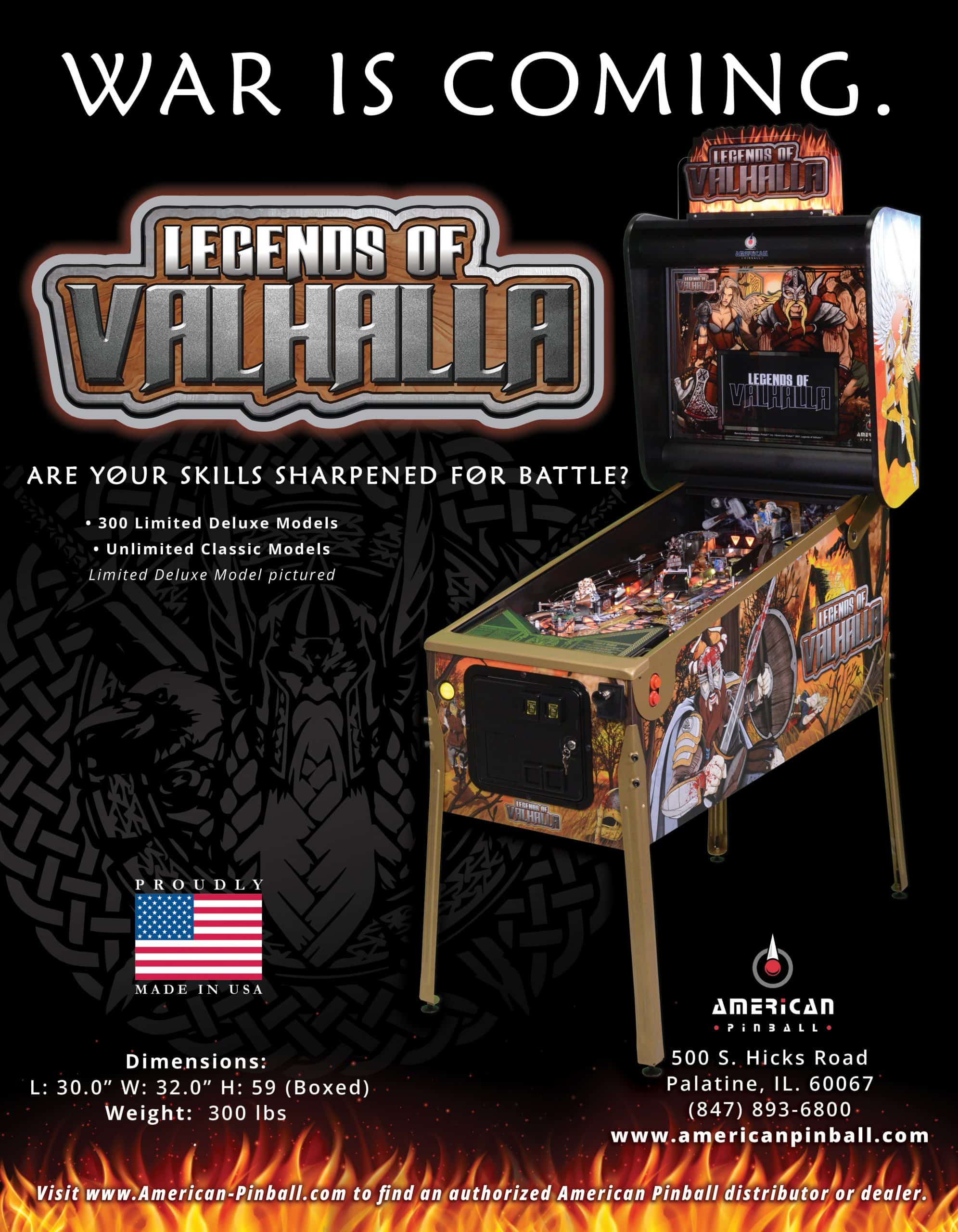 Challenge 16 unique battle modes where you can test your might against Viking Legends on your quest to Ragnarok, “The End of the World.”

Overcome the Kraken who will grab the ball via a hidden magnet beneath the playfield and throw it in unpredictable directions.

Prepare for War by building your army, and board your Viking ship to begin Multiball play. Demonstrate proper Viking values to prove that you are worthy of Valhalla.

Prove that you are skilled enough to call upon the power of the Valkyries. They can assist you in your quest to defeat your enemies who stand in the way of reaching Valhalla.

Utilize the might of Thor’s Hammer by activating it via the third flipper button. The power of Thor comes crashing down like a lightning strike, by capturing the ball via a magnet over the top lanes, giving you more control and leading to higher scores.

Legends of Valhalla is available in Classic and Deluxe Editions.

The following locations have Legends of Valhalla Deluxe Edition available to play now:

The following locations will have Legends of Valhalla Deluxe Edition available to play the week of October 25:

American Pinball will be hosting an Open House on Wednesday, October 27 from 10:00am until 4:00pm. Masks are required.