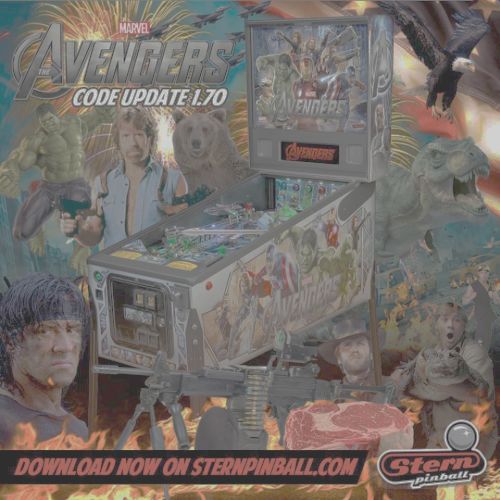 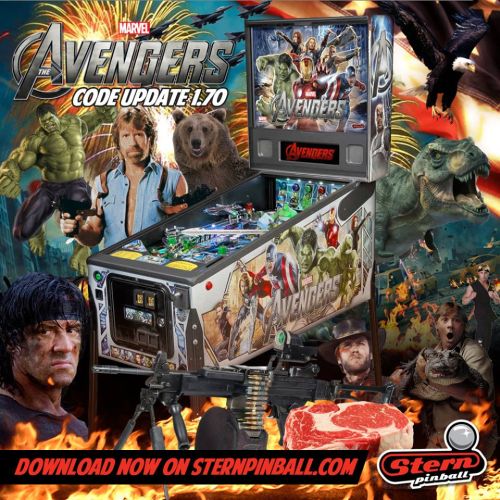 Like a Randy Orton R-K-O in mid-air … from outta nowhere. Stern powerbombs a code update for Avengers. Apparently from the picture above, Rambo, Steve Irwin, Chuck Norris, a T-Rex, a random bear and ‘Murica all agree that the update is good. There are a number of fixes, scoring adjustments and feature updates that seeks to address certain exploits. Thank goodness for an update to a game I previously thought was abandoned. This means any game could get an update. Doesn’t it? DOESN’T IT?

How about the “I don’t wanna shoot the Black Widow ramp at all” strategy because a good, powerful, accurate Black Widow shot can fail in two to four different places. The spinner can stop the ball. The hairpin left turn combined with the first lip of the bridge can reject the ball. The ball drop into the VUK can fall out. Again, a glance at the update details shows that the answer is “yes” for this case as well. Plus, the shot has the potential to be worth much more than it used to be. That helps. Sort of like how you may not like eating your vegetables, but they are really good for you. So, you should really think about taking that Black Widow shot.

If this update helps to address these issues, then we have positive progress.  I have an open mind about this. I’m looking forward to playing an updated game of Avengers. I’m ready to enjoy Avengers. Let the Avengers spell-a-thon continue! (H-A-W-K-E-Y-E, I-R-O-N-M-A-N, B-L-A-C-K-W-I-D-O-W … wow, that’s a lot of shots…)

HULK LOVE CODE! Stern Pinball has released Avengers Code Update 1.70 for Pro, Premium and LE. This update has an extensive READ ME file you need to check out. Hulk was so excited about the release he called his friends to help celebrate! Even Rambo loves the new code! #SternPinball

– Fixed a problem where Mystery add-a-ball would not add a ball into play if
the only available ball to add was in the Loki lock.
– fixed a problem with the Loki lock post double firing as balls pass thru the lock.
– fixed a problem where the Loki lock did not properly maintain balls as balls
transitioned thru the lock area during multiball events.
– Added dot animations to Battle for Earth wizard mode.
– added “Push Start” button graphics when credits exist.
– Battle for Earth level 2 jackpot speech is now less repetitive.
– added new Stern logo with register R to attract mode
– fixed text on the third shot of each hero (advance hero rule)
– added center spinner display effect.
– added center spinner display graphics to Black Widow mode start.
– fixed a problem with the MAX BONUS X award given by SHIELD.
– fixed a SHIELD display presentation problem (scores not shown properly).
– added an adjustment to allow “Attack on the Helicarier” wizard mode to
carry over to the next ball, default = No, carry over not allowed.
– added spinner rule/graphics to Black Widow advance.
– spinner starts at 5K per spin.
– pops start at 5K per spin.
– added advance pop value to SHIELD award (max pop value = 25K)
– added advance spinner value to SHIELD award (max spinner = 25K)
– Captain America pops now score 20K per pop (instead of 8K)
– completion points given for finishing a VS mode (which can be multiplied
if the final shot has a 2X multiplier on it.)
– removed strobe/pulse style light show from the attract mode light show,
i.e. this light show was designed for incandescent style bulbs. (removed from LE only)
– added an adjustment to score Black Widow ramp shots via the spinner,
default = Yes, Spinner awards B.W. Ramp.
– added speech if flippers are pressed during the attract mode.
– difficulty setting now require less pop bumper hits to finish Captain America battle round.
– added ball saver & ball saver adjustment to “Attack on the Helicarrier”.
– added an adjustment to virtually lock balls towards “Loki Multiball”
– all VS modes now show numeral progress towards completion
(instead of progress bars in several cases)
– changed bottom lane rule, i.e. left flipper alternates “LO” lamps, right flipper alternates “KI” lamps.
– added difficulty settings to all the VS modes.
– added VS mode difficulty setting to Extra Easy, Easy, Medium, Hard, Extra Hard, etc.. presets.
– added “Battle for Earth” difficulty and ball save settings to Extra Easy, Easy, Medium, Hard, Extra Hard, etc.. presets.
– you can no longer advance Hawkeye if “Attack on the Helicarrier” or “Battle for Earth” wizard modes are ready to start.
– a longer delay has been added between raising the bridge and shaking Hulk’s arms, i.e. this helps
to avoid the bridge from getting hung up on Hulk’s arm (LE only).
– “Attack on the Helicarrier” wizard mode can now start while the Tesseract mode is active.
– “S.H.I.E.L.D” mystery award now advances Bonus X by “1” instead of “3”.
– “Bonus X Hold” is no longer a “S.H.I.E.L.D” mystery award.
– “Bonus Hold” is no longer a “S.H.I.E.L.D” mystery award.
– “Attack on the Helicarier” now shows number of shots remaining to complete.
– Shots to the Black Widow ramp will divert the ball to the Hulk Eject if Extra Ball is lit.
– Shots to the Black Widow ramp will divert the ball to the Hulk Eject for the final shot in “Battle for Earth”.
– Hulk drop targets now pause before resetting in case a ball falls back into the Hulk eject.
– Hulk drop targets remain down during Attack on the Helicarrier.
– Hulk drop targets remain down during Battle for Earth.
– Changed rules for Battle for Earth which now has 4 levels.
– added difficulty setting for Battle for Earth.
– added ball save timer adjustment to Battle for Earth
– Fixed a bug that was causing the Magnet to ignore the “disabled” adjustment.
– Added slingshot power adjustment and implementation.
– Fixed a bug with the mystery lit background lamp effect.
– Fixed a translation that was off of the display.
– added German, French, Spanish and Italian translations
– Removed unused tesseract adjustment.
– Got the proper backgrounds to show with the proper shots in the mini wizard mode
– removed a hulk multiball start speech call that is only used on the LE version of the game.
– fixed a problem with the thor escapes capsule award, it wasn’t showing the full explosion reveal, but now it does
– Changed the Hawkeye spell out award so that the letter collected flashes in a different (and more visible) manner
– included the playfield lights in the match display effect, they do a ground pound effect now.
– Black Widow skill shot not available on the Pro model.