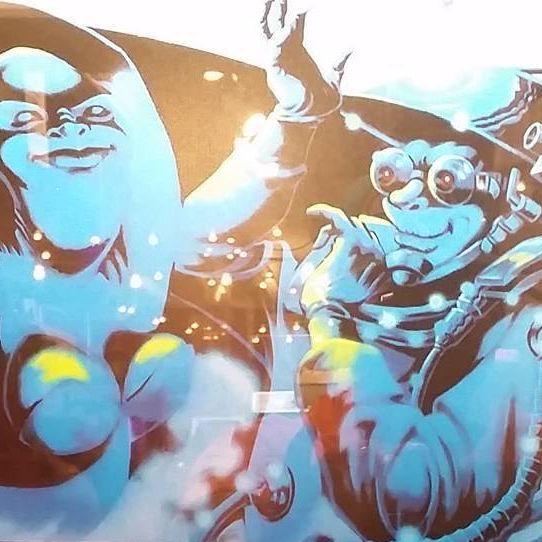 Have you ever tried playing pinball by flipping one flipper with your pinky finger?

No, really. Let me explain.

Big Bang Bar is at Silverball Museum in Asbury Park! It’s so sweet to know that there are two of these games within reasonable distance of my person. The other is at Sunshine Laundromat in Brooklyn, a place is becoming more awesome due to their renovation efforts which are not quite finished yet.

Anyway, Big Bang Bar isn’t the greatest game in the world or anywhere near the deepest, but it’s a lot of fun and has great sound callouts. It’s also one of the rarest. Every time I see it, I must play it mainly because I’m not sure when the next time will be.

So, I am off and running with the game starting modes and Multiballs and other stuff and everything was fine. Really. Everything worked! The Ray’s Ball Busters gimmick and the Looped in Space turn-around lock alien things worked like a charm. All was good. Until the left flipper decided to not work sometimes.

After having a WTF moment,  discovered that the left flipper worked if I pushed the button part of the way in, as if I were flipper staging. However when I pressed the button all the way down, the flipper would drop. I’d like to ask you pinball techs out there what that means and how that happens.

To get around this, I decided to flip the left flipper with my pinky finger for the rest of the game! I figured my pinky wouldn’t press the button as forcefully as I normally would. Guess what? It worked! That is until I got to the Big Bang wizard mode for the second time, and the flipper just seemed to give up.

Before you ask, there is no way that a tech at the facility would have been able to fix this, mainly because they wouldn’t have had the time. It was a Summer Sunday at the Jersey Shore, and one of the most packed, crowded weekends of the year. I didn’t expect anyone to spend time away from doing whatever to fix this flipper button, no matter how special the game was. Besides, you already pay to get in at the door, which means they don’t have to worry about coin drop or lack thereof on one particular game. Plus, they have dozens of other working games out there to play.

So, I didn’t even bother asking for help and decided to just deal with it. That game was a nice way to end my pinball day, regardless of the wacky flipper button.