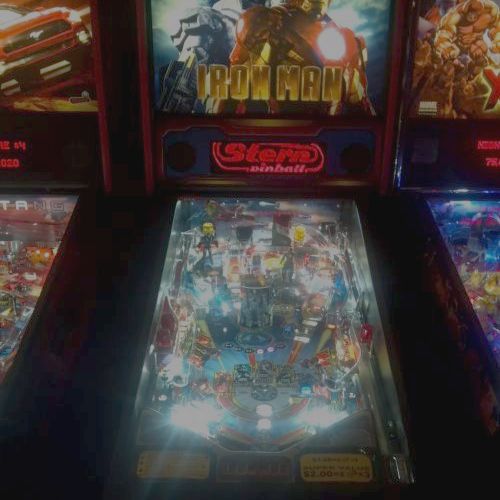 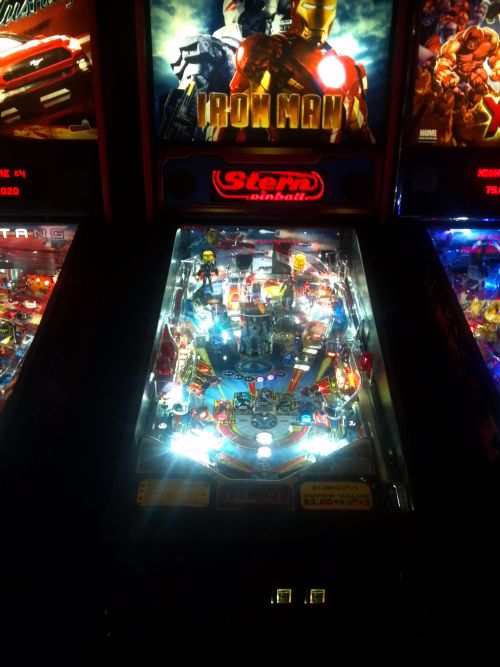 Congrats! You are now blind!

My local arcade, Eight on the Break, has added a brand spanking new Iron Man Vault Edition to it’s lineup. Of course it looks fantastic because it’s new. It’s also brilliantly bright. Look here as it outshines the Mustang and X-Men that are right next to it. Don’t look at the light! I don’t know whether it was an illusion but the game seemed to sound better too. Although that was probably because the sound was up, and I could actually hear it over the Beatmania game that was near it.

Anyway, off I go on a ten-game session of Iron Man VE. Why ten games? Well, this game is going to be a part of the JPA PinGolf for this season and I need to get some sort of PinGolf target score for the competitors. What I do for a new game is play ten games, without any warm-up, and I play extra balls. Then I take the average of the ten games and finally take a percentage off of the average (usually 30%, but sometimes up to 40% or more) to get the target score. It’s very unscientific. It just happens to work so far.

So, I step up for my first game expecting Iron Man VE to kick my natural behind off, because it is Iron Man. I was pleasantly surprised to see that the outlanes were set easier than tournament level. That is, there were actually posts in the outlanes to give me a chance to save the ball.

The tilt was very fair. It wasn’t really liberal, but it was far from conservative. I could give the machine some play to try to get the ball out of the dangerous outlane areas. The double-danger Stern slide save was in full effect. 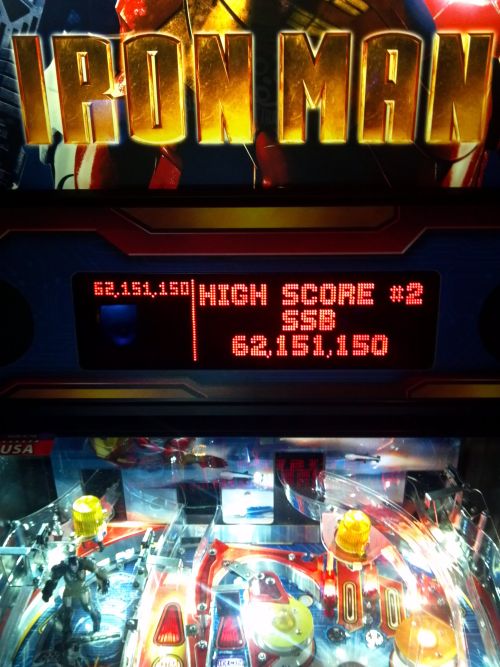 Big respect for the strong flippers on this game, by the way. When I’m going for “dat right ramp doe” that puts you in danger if you go only halfway, I want to hit that ramp with conviction and power! It gives me more confidence that I might actually make it, and if I brick it, I want to really mean it!

That’s game one in the picture to the left. Yes, I was surprised when it was over. I was so used to getting smacked down by the game with regularity. It included an almost Do or Die collect. It was messed up really. I shot the center spinner to start Do or Die, but the ball bounced hard off the stopper near the bumpers, past the one-way gate (HAH!), back through the spinner and straight down the middle.

Sprinkle in some Jericho mode and then game over.

Darn straight, I am playing this again! I’ve got nine more games to go! 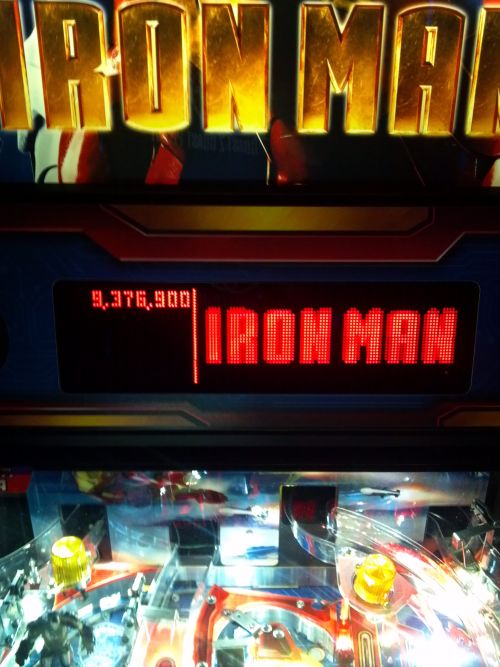 Yup! There’s a proper butt-kicking right there! Iron Monger basically took the ball and did a HADOUKEN straight down the middle, TWICE! The War Machine kicker took care of the third ball. Well, Iron Man giveth and Iron Man taketh away.

One other thing that Iron Man giveth is a bit of a status report. It’s not much, but it lets you know how many hits are left for War Machine and Whiplash. Both are key points of information to know. Especially Whiplash, since when you hit the Whiplash targets, the animation STILL shows the number of hits left far too quickly for the player to see it. 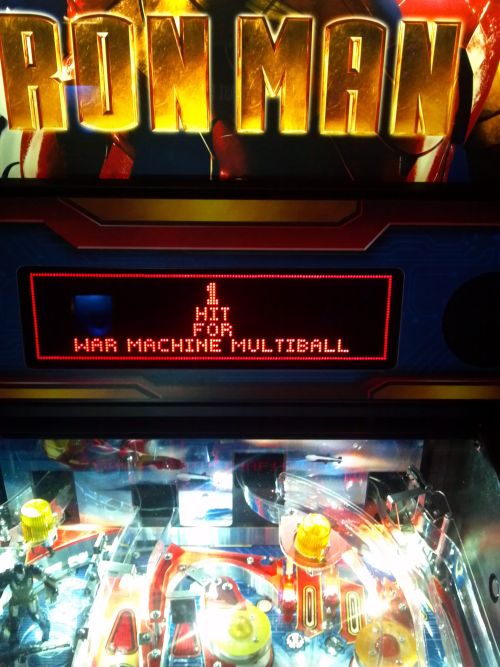 Thank you for this pertinent information!

Finally, here’s my last game of Iron Man VE for that evening: 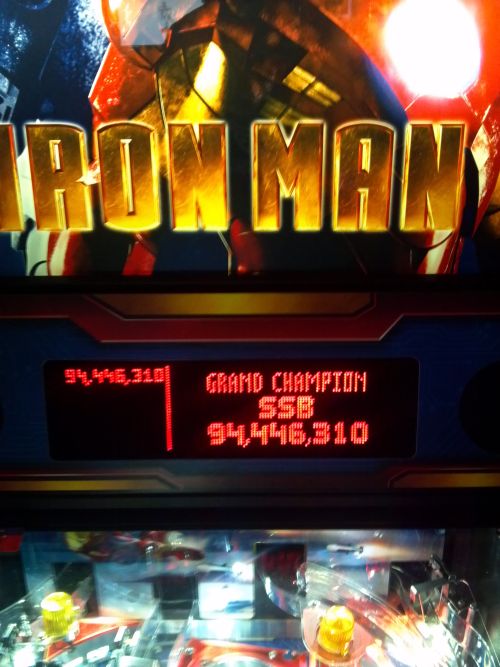 Would you rather be feared, or respected?

Needless to say I was quite pleased with what happened. I was able to get Do or Die for 28.8 Million which doubled the playfield. Did a Do or Die collect double the playfield before this version? Regardless, I was able to use the double playfield for Jericho Missile Madness. Even though I did not finish Jericho, the points still came rolling in.

After my ten-game session I ended up with a PinGolf target score for Iron Man VE that…. was probably too high. I decided to move on to some other pinball activities, which included a few games of Avengers. 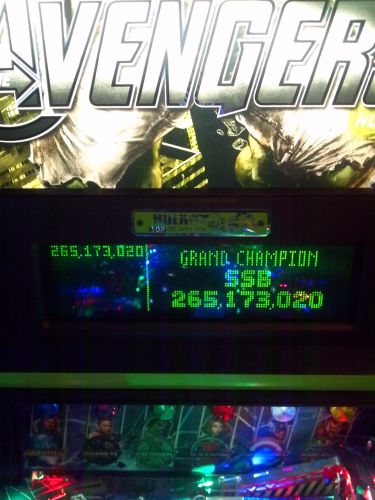 And then this happened…

Sorry, I still don’t like Avengers very much with its Black Window ramp that can fail a good shot in four different places, and it’s Save the President sub-wizard mode. And it’s HUGE inlane-light blocking plastics.

I finished the night with this: 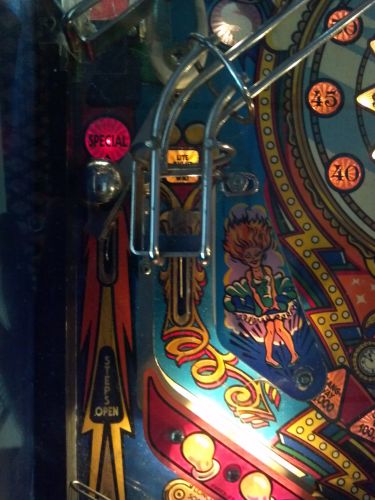 Yes, that is in fact a ball stuck on a metal piece that fell off and went down the outlane, preventing me from getting a special. That means it’s time to go home.