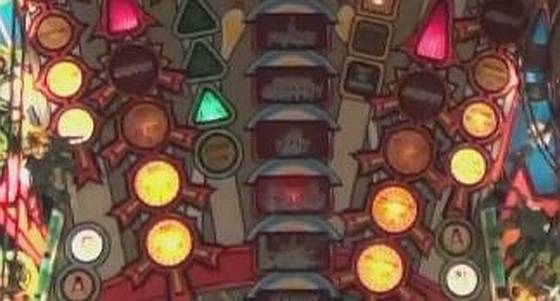 The “Big Four” stack is ready.

The game Attack from Mars has a feature where four shots have hurry-ups when you shoot each of them three times. Immediately after you collect the third shot on any one of them, a hurry-up countdown starts.

One hurry-up starts a countdown that begins at 100,000,000 points that can be collected by hitting the center targets.

The best hurry-up award available results from stacking all four hurry-ups together. If you can do this, you get 1 billion points and start Total Annihilation Multiball instantly. You don’t even have to hit the center targets.

The “Big Four” is when you have made two of each of these four shots (see picture). That means you only need one more shot on any of them to start a hurry-up. You only need four shots to collect them all, get the instant billion and start Total Annihilation. It’s better to cradle the ball at this time, so that you can plan out how you are going to attempt these four high-pressure shots.

In the video below, Daniele Celestino Acciari has the “Big Four” set up at time index 7:07.

The “Fast Four” begins as soon as you start any of the four hurry-ups. Because the next orbit shot will start their hurry-up, the diverters will let the ball careen all the way around the left and right orbits. It is possible to collect all four shots in one combo. Four fast shots, four quick hurry-ups. One quick billion.

Note that it’s not required to get all four shots in one combo to get the billion. You merely have to beat the countdown timer which increases as you start more hurry-ups. But, doing it in quick succession is just … cooler.

In the video below, Daniele Celestino Acciari attempts the “Fast Four” at time index 8:38.