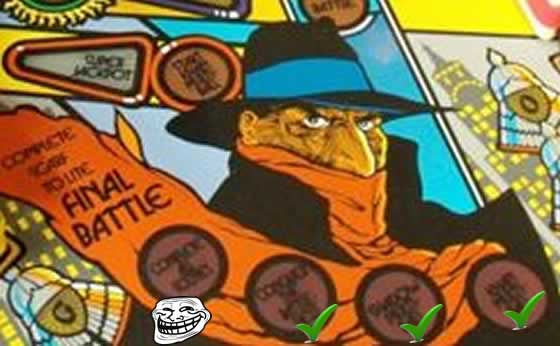 In games with a wizard mode, it is the one requirement that is much harder than all the others. It is usually the one you complete last before achieving the Wizard Mode, making the other requirements not as relevant.

Often, the Gatekeeper is the one feature that the player does not complete through the natural progression of the game.

Complete all scenes in The Shadow

Starting a mode in The Shadow is difficult. You have to either shoot the mode start hole via a pathway that is barely larger than the ball, or you have to shoot the Khan Multiball hole when it is not lit. Both are very difficult and risky shots to take.

Now, do that a total of seven times throughout the game. You will very likely complete all three other tasks way before completing all of the scenes.

Start all Illusions in Theatre of Magic

If you are going to play Theatre of Magic for a high score, you are going to shoot the left orbit, a lot. Every shot adds to your bonus, and you may get bonus multipliers from it, if the shot stops at the top lanes. You also might try some loop combos and even get some right orbit shots just for shiggles.

Mulitball? You know you’re going for that. The mystery award from the Basement might even give you Midnight Madness.

Unfortunately, none of that has much to do with the Illusions. That all comes from shooting the perilous trunk… a lot. OK, so collecting the Theatre Hurry up gives you one hit toward activating the trunk, but that’s it. Plus, there are 8 Illusions. Good luck with that.

Avatar is all about getting Link Multiball and Ampsuit Multiball. When you are done with that, do it again. No one gives a flying Unobtainium about the NA’VI characters. OK, maybe you will pick up most of them by stacking NA’VI scoring and Multiball. However, there will probably be that one character that still remains uncollected. That character will probably be Neytiri because of that ramp.

You know what? Forget about the Banshee too! Can there be two Gatekeepers?

You need a good number of Drones to finish this requirement in Iron Man. A few more, in fact than what you need to light War Machine Multiball. By the way, the Drones are targets that are designed to drain you anytime you hit them. So … if you are going for them on purpose … good luck with that, too.

But, what about Whiplash, you say? Well, Whiplash is covered because you can stack it with War Machine Multiball, as long as that Monger hasn’t come out to play.

Any more examples of Gatekeepers?