At first, I was thinking of just writing one long paragraph that said, “WOOOO … OOOOOOO … OOOOOOO!” and then simply ending it there. Now that I’ve had a chance to think about it a bit more, I’ll continue by saying “Thank you, Silverball Studios, and good luck.” Silverball Studios wants to revive the series with a brand new Pro Pinball table. This is going to be serious business because they’ve got Pat Lawlor (Addams Family, Twilight Zone) on board for this project. Plus they want to remaster the four previously released tables with better graphics, support full HD tate mode (1080X1920) and release it for more platforms such as iPad (that will be yet another reason why I’ll have to just break down and get one). I hope it’s released for Xbox Live Arcade, PlayStation Network, and Steam as well. That will get even more eyes exposed to Pro Pinball.

One of the cool things about the Pro Pinball series is that, even though the tables are simulations, pretty much everything in them could exist on a real arcade pinball table. Look at this table. Now look at Star Trek: The Next Generation. Do you see the similarities? The Web is basically ST: TNG flipped vertically with no guns (or is that horizontally, I never get that right, and I’m not going to check). This is a very fast game with combos all over the place. The game even has a mode called “Combomania” just in case you weren’t sure they were serious about the combos. Jackpots in Multiball at the center shot and the side ramp …  yup just like ST: TNG. It is a game that’s very addictive, and I’ve spent many hours playing it.

Hey, STERN, make this game real. It would be the least expensive of the four to do, and you would win all of the monies.

It’s 2012, and Pro Pinball: timeshock! is still one of the best pinball simulations available. Mind you, this game came out in 1997. It’s got a rule set that could sit at the Thanksgiving grown-up table with rule set master, Keith Johnson and have a good conversation.

To this day, when I see a picture of Mount Rushmore, I think of timeshock! If this game were made real I might be broke, because I would have to own one. Sure, call me crazy. I don’t care… well, I prefer the word “enthusiast” or even pinhead…

… and by the way, I actually like the out of tune, guitar-dominated music that serves as the first gameplay theme. Yes, the music does get even more cheesy as you go along, but I think that’s the point. You’re saving the universe by travelling through time … … MAN!


WARNING! The following video has MaSsIvE GIGANTIC SPOILERS! YouTube user, nicojull, posted a more than 70-minute video that takes you through ONE ENTIRE LAP of the game. It includes nearly everything in the game except some of the Quickshots. Even though you can’t technically beat the game, you do see an ending with credits. This game reminds me of Road Show while not quite being Road Show. You’ve got the United States in the center indicating the cities you’ve traveled through. Certain shots give you miles to advance to the next city. The police car and the taxi are sort of in a similar position as “Ted” and “Red” are in Road Show. You even have a shot in the upper left where you can buy stuff to help you on your way. However, that’s where the similarities end and where things get “innovative” as industry pundits might say.

Hey Jersey Jack, alter Road Show and make Big Race. You would get all of the rest of the monies that The Web didn’t take.

This game is the weakest of the four in my opinion, but not by much. This is also the only game of the four that has parts that couldn’t exist for real. It would cost a lot of money to make a device that hides things like a drill, a submarine, a blimp, and a rocket underneath the playfield. You need all of these vehicles in order to complete missions and defeat General WhatsHisFace.

I guess there could be one toy underneath the playfield that pops up like the Brain Bug does in the game Starship Troopers. Then you could somehow indicate which vehicle you were using on the toy. Maybe put a small dot-matrix screen that says “Drill” on it.

More significant spoilers ahead! YouTube user, Andreas Grabher, shows us the final modes of the game. Another great thing about these games is that they are available for about $5.00 each at classic game download sites like Good Old Games. That means you have no excuse if you haven’t played all of these excellent pinball simulations yet.

The Kickstarter will begin September 3, 2012 and they are reportedly looking for at least $400,000 in funding. I suppose the reason why the funding goal is not around $60,000 like The Pinball Arcade is that Pro Pinball is projecting the costs for devolping a new game, as well as upgrading four others. FarSight has used their Kickstarters to cover the license fees on each game only. 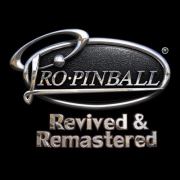 Pro Pinball web space with info on the Kickstarter

The story as reported by Pinball News

The story as reported by IFPA