Roy Wils proves that the Pinball Arcade scores are real.

Have you ever played a game before where there are leaderboards? Of course you have. Anyway, have you seen the scores at the top of some leader boards where it basically looks like a crazy glitched score because it’s so high? Like some variation of 2^n – 1.

Well, Roy Wils is proving that the top the Pinball Arcade leaderboards are legit and are achieved by real people. Regularly he puts up amazing scores on this platform, and has occupied the top spot for long stretches at a time. Recently, he won one of their online tournaments and has been selected to add his tips and strategies on their games. 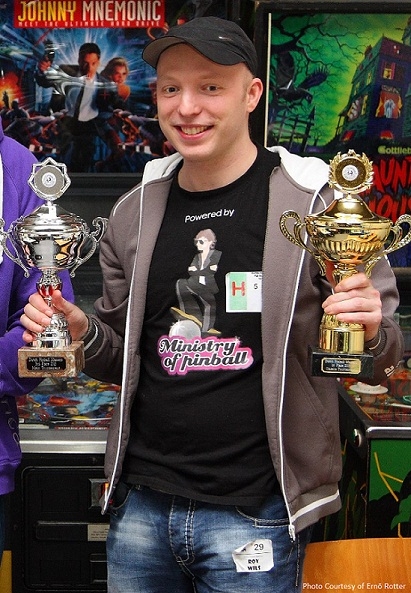 Roy, along with the inclusion of top arcade pinball players such as Josh and Zach Sharpe, Cayle George, and Keith Elwin, will continue to promote the legitimacy of The Pinball Arcade platform.

We are very happy to congratulate Roy Wils (currently ranked 20th in the world by the IFPA) for winning last month’s Pinball Arcade tournament.

This man knows how to play pinball. Last weekend he came in first in the classics tournament at the Dutch Masters and finished third in the main tournament. Roy will be representing the Netherlands at the 2013 World Championships in Germany in a couple months. We wish him the best of luck!

In our tournament, Roy beat out almost 5,000 other Pinball Arcade players to take the top spot! This is particularly exciting for us. Not only can we confirm that the scores he posted are legitimate, but we think the fact professional pinball players are winning our tournaments also indicates our pinball simulation is pretty authentic!

Roy’s unique combination of being a top IFPA Pro and one of the best players of our game will allow him to give us average players new insights into how to score better in the Pinball Arcade. Starting this month, he will join Josh and Zach Sharpe, Cayle George, and Keith Elwin in writing the Pro Version tips.

We recently asked Roy a few questions about the Pinball Arcade:

What do you like about our game?
I like Pinball Arcade a lot as it gives me the opportunity to play REAL virtual pinball everywhere I go. It brings up all those nice memories I have along with it as I played all those tables during my childhood – which is great!

What’s your favorite table that we’ve recreated?
Star Trek: The Next Generation – hands down; the action, the lights, the sounds, the flow, the animations. It’s a truly amazing table!

Are there any general tips for scoring better on the mobile version of Pinball Arcade you can pass along?
First of all, be focused and rested, be calm and sit or stand still while playing – preferably play the game with audio turned on! I wear headphones/earplugs while playing. By that, you can understand the game better during gameplay as most tables tell you tips of what to do!

Also, there is a sort of rhythm of the ball within the game. After you play the game for a while, you will recognize that rhythm – and that will dial you into the game. Find it for yourself and you will play better!

Can you give everyone a tip or two for one of the tables in the last tournament?
I would like to give a Tournament Tip for Star Trek: TNG.
The key to getting yourself a very high score on Star Trek: TNG is NOT to aim for the obvious (which is modes and its final frontier end battle). It’s nice to pick those up along the way, though.

For getting yourself those ultra-high scores, the best strategy is to start and play multiball all day long. If multiball is over, all you do is to try to enable those locks again by shooting the right orbit, and at lock number 3 start Multiball.
Those jackpots within multiball can be gigantic during the course of multiball action as the base jackpot value can and will grow to very high point levels.

For example, during my last big game during the Tournament, I had 3x jackpots worth an astounding 600 Million points! The jackpot scoop shot can be easy to shoot for once you are dialed into it!

Thanks, Roy! On behalf of the Pinball Arcade – we look forward to working with you to help us make our game as good as it can be!