Pinball Pros(e) v0.3 | The cure for the common Herb style? 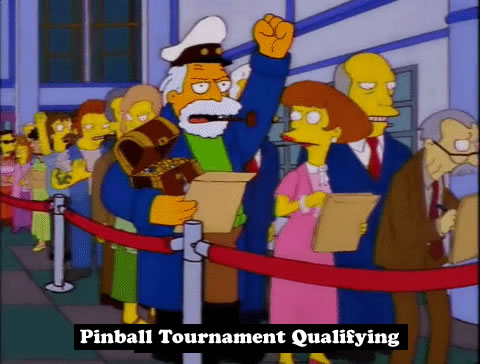 Would you like some food for thought? OP will provide. I’m not promising that it will taste good, though.

A short time ago, I wrote this aside as part of another blog post:

I wonder what the effects would be of running a tournament with unlimited qualifying where your last score counted instead of your best score.  (1)

I know that sounds peculiar because it’s different. With the spirited debate going on about the viability of Unlimited Qualifying format (2) (3) , I’m down for trying something different. (I’ll get back to this later.)

Tournaments with unlimited qualifying can be plagued with long queues. Remember the amusement park line at Pinball Expo Flipout and the scrums at any of the PAPA Classics events? Tournaments have been trying to address this by tweaking the unlimited format into a limited one where each player is given a maximum amount of entries to use. The question here though is how many tickets vs. how many games. What is the proper balance? Don’t look over here for the answer because I don’t know it. I can tell you that I have been involved in only a few limited Herb tournaments. One thing that is for certain, the urgency to do well quickly is another type of pressure entirely.

The most recent limited Herb tournament I played in was Pinfest 2016.

For the Classics tournament, we were given a maximum amount of eight entries (single games) out of a choice of five different games to play, where the best four games count towards the standings. Knowing that, I started thinking about strategy on the way to the event. I’m thinking stuff that’s questionably logical like: OK, 8 entries with 5 choices — I’ll just pick 4 of the 5 games. I’ll play them all once and then hopefully learn enough about the bounces that I’ll do well on the second try for each game.

It turns out that if it had happened like that, I might have been shut out of the Classics Final, because I was only able to get through 5 games in total that day. Because of the limited availability of games, players didn’t have many chances to do well, so you had to get it done immediately.

Having only five games available to play also had the effect of rather long queues for games even though it was limited qualifying. (imagine 13 people in queue for Future Spa, and 12 for SeaWitch). It seems worse than it actually was, because the games were destroying everyone. For Future Spa, getting 150,000 points was an accomplishment, and my 1st place score was based on getting a 6X multiplier once. Also, since we were using NeverDrains, people could queue up and (perish the thought) see the rest of the show!

Luckily, 4 out of my first 5 games were relatively good scores, so I had securely qualified for the Classics Final. I couldn’t help but think that part of the reason was that we didn’t have many chances to put up big scores. So my scores, which would have been mediocre at best in an Unlimited Herb format, held up in this extremely limited Herb format.

For the Main tournament, we were given a maximum of eight entries out of 10 games to play, again with the best four games counting towards the standings. More games means more room to breathe as far as game choice and queues are concerned. But, different strategies now came into play. Do I spread the wealth and do 1 ticket each on eight games, or some other combination? I decided to duplicate what I did for Classics onto the Main tournament by picking 4 games to play and trying to do better after I learn the bounces, kickouts etc.

Again, my first 4 games got me on the board in a decent position. Enough for me to throw out my strategy and put Ghostbusters as a 5th game. Surprisingly for me, I did well. I learned later that the flippers were adjusted to be less evil which made sense. It was the longest game of Ghostbusters I had played up to that point, ever. Add in a random game of Swords of Fury, where I couldn’t get the Jackpot target to save my life. But, I played long enough to be good to go. Just as in Classics, my scores were mediocre. However, there were not enough entries or time for them to be beaten down.

This extremely limited Herb style tournament allowed a good number of people to play even though we had very little time to qualify. Woe to those who showed up at the tournament to start qualifying with only a couple of hours left. There was just not enough time to finish for these players.

The trade-off being that the pressure is high to perform immediately. Every ball was important. I had also mentally decided not to worry about doing well. If I ran out of my 8 entries and I was not on the board, I still would have time to check out the rest of the show.

I don’t know how I would handle a tournament like Texas Pinball Festival where you get 20 entries out of 12 games to play, where the best 10 scores count towards the standings. Since 10 games are counted, you have to spread your entries thinly. That seems like you would only get one shot on quite a few games, including house ball prone EMs. Cancel my flight plans for that one.

What if we added another wrinkle where a player only kept their last score instead of their best score? (Oh yeah, no voiding during a game, too.) How would that effect events with unlimited or even limited qualifying? I can imagine the extra added angst that a player would have as they are deciding whether to replay a game on which they already have a good score. Since, if they do replay it and flunk out, they risk dropping their rank significantly.

What about the players who are sitting nearly above the bubble? For example: 23rd place where 24 people qualify for the Finals. Do you play again and try to better your ranking, knowing that getting a worse score means you could kick yourself out of the playoffs?

I can imagine the Gatekeeper, and others just above them in rank, standing around or pacing, maybe even glancing at each other. They might be pondering whether they are going to play another game, where normally they would be hammering at any game they could find in an attempt to scrape some points together.

Meanwhile, the snipers, who are currently on the outside looking in, are throwing darts at anything that has flippers. This is causing them to rapidly rise and fall in rank based on their last scores counting for each game. At the same time, they are hoping that a player who is currently in the Top-24, harms themselves by doing poorly on a game which they had scored higher previously.

Until, finally a sniper succeeds and vaults into the Top-24, kicking one of the borderline players out! This immediately would cause the person who was pushed out to spring into action!

I could see a similar, but less dramatic situation happening for players who are in the Top-8, battling for a bye in the first round of the Playoffs. These lofty players might not want to risk having a bad game cause them to relinquish that bye.

However, lurking in the wings are the players between 9th and 24th place, some of which are trying to make their way into the Top-8. Also, while being careful to not have a bad entry catapult themselves out of the Top-24 qualifying standings entirely. Again, their rankings are rising and falling, sometimes haphazardly as they play each game.

Until one of them succeeds and kicks one of the Top-8 players out of a bye position! It’s time for the former bye-holder to rejoin the queue and put themselves in danger again.

I can see a few things developing from have the last score on a game count at all times. Normally in Herb Style tournaments, less scores get entered as the event progresses. Eventually it becomes a major thing when a score actually does get entered. However if the last score counts, there is no voiding. All scores are important. That also means the scorekeepers would be just as busy at the start of qualifying as they would be near the end.

The increased amount of drama would be noticeable. Players would be thinking constantly about whether it would benefit them to play again while watching other players scores and standings like hawks. It could turn into a game of “chicken” with players faking each other out, bluffing at whether they would play another entry.

One thing that would be detrimental is that, without the usual hammering that happens near the end of tournaments, the potential prize pool would certainly be less due to the decreased number of entries. A standardized entry fee for the tournament can help to counter that whether it’s unlimited or limited qualifying.

Given all of this speculation and analysis, would you be willing to try a “last score counts” Limited or Unlimited Herb Tournament?

(I used the words ‘would’ and ‘could’ way too much in this article. How do you write a post that guesses what might happen without doing that?)