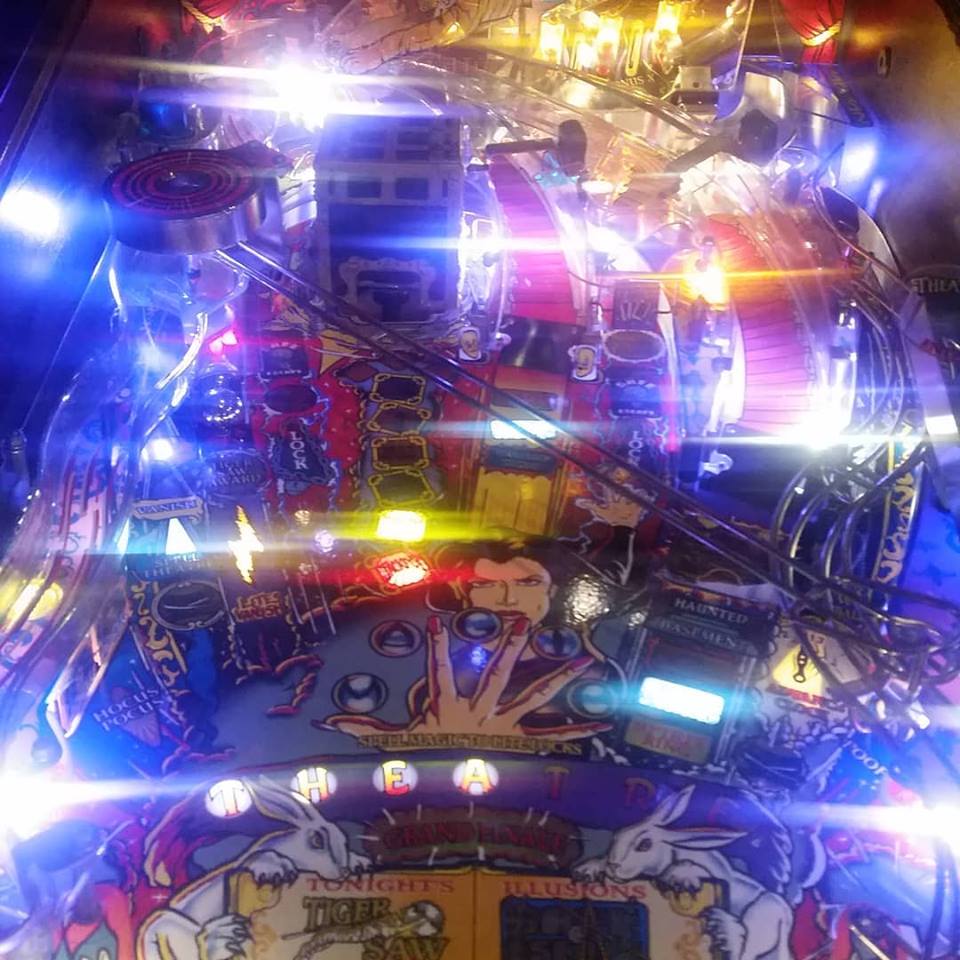 Unrelated comment: Look at those lights. This is approximately what some games look like to me when oppressive LEDs are impairing my vision. Now, imagine if these lights were flashing at you (e.g.Ghostbusters). This is why I make sure I have sunglasses at every tournament I enter.
The lights on this particular game were NOT oppressive. However, the camera on my cell phone sucks, and that helped to produce the lighting effect. 🙂

(Portions of the following have been reposted from a facebook reply I made to a question about this game.)

“A player can shoot the left orbit to get a theater letter during single-ball play or during Tiger Saw Multiball.”

That sounds simple and not fatal at all, but here it what results from that. If the ball goes into the bumper area, when it comes out the player can catch the ball on the right flipper to shoot the left orbit again. Or, if the ball makes it beyond the bumper area and goes down the right habitrail, the player can just shoot the left orbit again. Repeat. Repeat. Repeat.

The benefits for this are: Each letter gives you more bonus and gets you closer to the “Theatre Trunk Hurry-up”. Each time you go into the bumper area, you raise the value of the Theatre Trunk Hurry-Up. Plus, you might get a bonus multiplier of +2X (up to 8X).

Huge bonus potential and consistent scoring for relatively low risk, as long as the player remains controlled and reasonably accurate with the left orbit shot. You can exploit this further during Tiger Saw Multiball by holding a ball on the left flipper during the entire process. This keeps a ball in reserve and give the player even more security. You can also do a version of this strategy during Trunk Multiball too. However, instead of a Theatre letter, the left orbit shot will raise the Jackpot value as high as you are willing to go before you finally decide to go for the the trunk to cash it in.

Many tournament players know this exploit. As such, games on ToM take a long time to complete because this is “The Thing To Do” on the game. I hope a rules change like what I am proposing below will provide a way to encourage players to play the entire playfield, instead of just that specific portion.

Remedies:
At the INDISC tournament, the TDs prevented the ball from going into the bumper area via the left orbit shot, forced the ball to exit from the bumper area at an unusual angle, and made the tilt extra tight. This put the players in danger each time they shot the left orbit. There was also an alternate ROM installed at INDISC. It lessened bonus X potential by making it to count up by 1X each time instead of by 2X. That means it takes longer to get to the 8X maximum. The game was also set to have a mode ready after only one hit to the Trunk, to further discourage players from going for the left orbit.

Proposal:
A ROM with an additional change in the rules for Theatre of Magic Pinball: Instead of getting a Theatre letter only from the left orbit, have the Theatre letter shot move from left to right.

There are seven shots (not including the trunk) for seven letters.

I believe adding this rule to the already useful alternate ROM will remove this fatal flaw in the ruleset for this game, bring it back into tournament use and make the game more exciting to play. It’s here where I wish I were a competent programmer, but fortunately for the pinball community there are others with those talents.

“I would even settle for, have to hit any shot after the left orbit to relight the left orbit for a theater letter. But I like the “use every part of the buffalo” suggestion you make too.”

Making the player alternate shots would be simpler to pull off. The program can turn off the white insert at the entrance of the left orbit that says “Spell Theatre” when the player needs to shoot something else to turn the light back on again.

Another (less fatal) flaw that the Alternate ROM addresses is the combos. You can shoot the center ramp over and over for combo points up to no known limit(?). The Alternate ROM used at INDISC maxed out the combo points at a low value to discourage this strategy. This flaw is less exploitable, because the player needs to be significantly more accurate on the fly to repeat the center orbit shot.