Metallica v1.70 with Owl and Werdrick 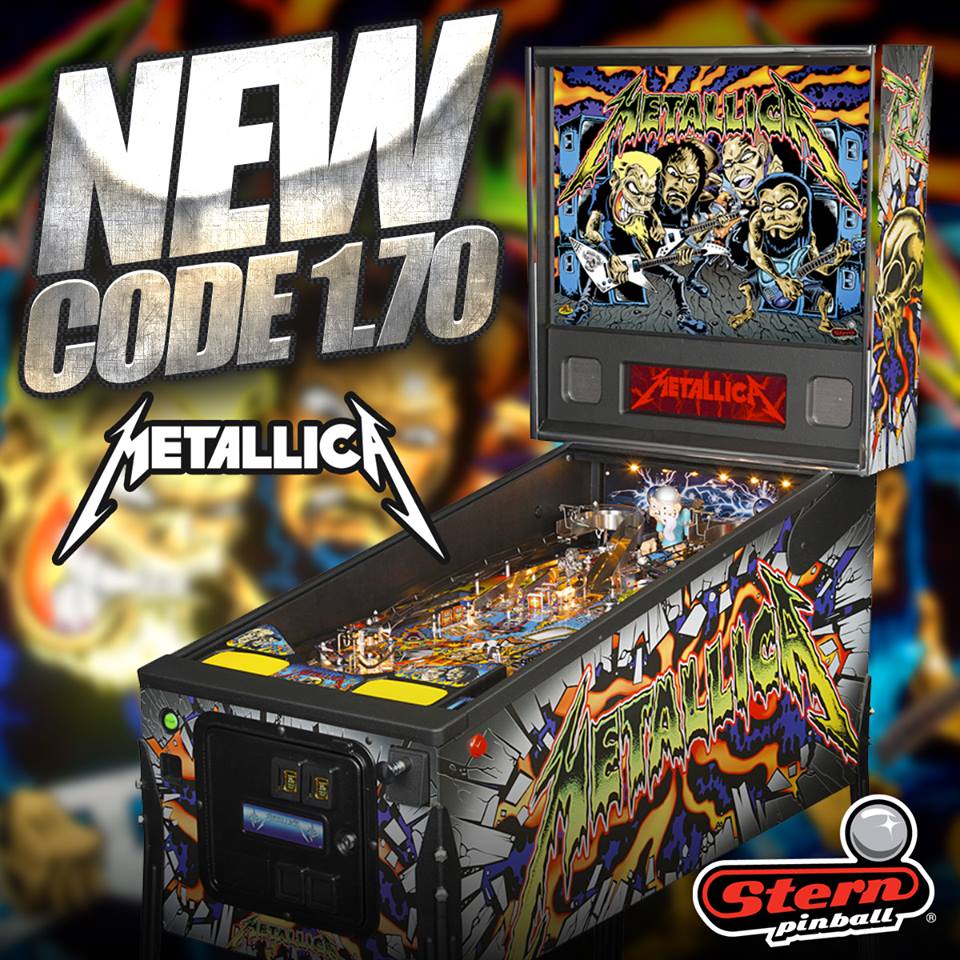 Join us for some ‘Metallica’ Pro Pinball with the new 1.70 code. Special guest Jason Wedrick was in town so I invited him over to the Owlcade for a few games. The changes to the code can be viewed at http://pastebin.com/X0d6n1L0 — Watch live at https://www.twitch.tv/owlnonymous

NEW METALLICA CODE IS LIVE! Stern Pinball has posted code update 1.70 for Metallica Pro, Premium and LE Pinball. The update comes jam packed with additions like new speech, bug fixes, scoring tweaks, diagnostic improvements and more. Complete details can be found in the READ ME file that accompanies the update. Metallica Pinball remains in active production at the factory. Contact your authorized retailer for pricing and availability on Pro and Premium models.

*******
1.70 – PRO Release Notes
*******
– Timed modes (Blackened, Coffin Hurry-Up, Fuel, Lady Justice, Seek &
Destroy) were not being paused when the Crank It Up mode select was
active. This has been corrected.
– Changed combo scoring so 3+-way combos increase in value much more
quickly.
– Fuel lane now awards 1 blown piston for each lit light, instead of
1 blown piston for all three lit lights.
– Added speech to the “Enter Sandman” and the “For Whom The Bell Tolls”
modes.
– Synced knocker to run with replay/special effects.
– Added speech for chair guy fry ready (electric chair multiball).
– Added a speech call for snake lock lit.
– Fixed player up effects so they wait for speech.
– For whom the bell tolls mode was not displaying the score correctly.
This has been corrected.
– Added mystery awards for the “Crank It Up” modes:
Battery –
Awards 1 sparky hit.
Lights all shots at level 2 (blinking).
Increases the sparky value.
Increases the shot values.
Enter Sandman –
Awards the first blinking shot from left to right.
Lights 1 additional item.
Increases the shot values.
Fade To Black –
Awards the blinking shot.
Requires 2 fewer switch hits to achieve the next fade level,
to a minimum of 5 switch hits per level.
Increases the shot values.
For Whom The Bell Tolls –
Awards the first blinking shot from left to right.
Lights all shots to complete an entire column (1 time).
Increases the shot values.
There is no advantage to increasing the mystery level before collecting
the award; the award will not improve.
– Cross/electric chair/coffin/snake super skill shots now award +1
of the item towards bonus/crank it up/end of the line bonus for each
regular skill shot made.
– Fixed a problem with the bonus where stopping the bonus presentation using the
flipper buttons would leave one of the item flasher effects (cross,
electric chair, coffin, snake) running.
– Some switches would be flagged with an error in the tech alert when
they should not have been. The list of offending switches are:
TOURNAMENT START BUTTON
START BUTTON
TROUGH JAM
LEFT COIN
CENTER COIN
RIGHT COIN
FOURTH COIN
FIFTH COIN
TILT PENDULUM
SLAM TILT (OPTIONAL)
TICKET NOTCH
BACK
MINUS
PLUS
SELECT
DIP #1 – #8
– Added bonus for all items collected at the start of “The End Of The
Line”. Added speech and sound effects.
– Added a lamp effect for coffin hurry-up start.
– Added alternate speech for fuel mode start.
– Removed “casket” text from coffin multiball start effect.
– Fixed an issue where the music was not quiet immediately after the player
selected a mode for “Crank It Up”.
– Added super jackpot stage to snake multiball. After collecting 3
(adjustable) snake combo jackpots, all shots are lit for super jackpot
until the end of the multiball. Playfield shots disappear when
collected, and reappear when all have been collected or the snake
eject is scored.
– Added speech for HSTD enter initials timeout.
– Fixed a bug that was causing the device driver for the magnets to ignore
the “disabled” adjustment.
– Fixed the player up display effect so it does not end with blank text.
– Fixed stray (bad) pixels in the BATTERY mode intro art.
– Combos were not clearing a counter properly, which caused incorrect
combo values to carry over to other players. This has been corrected.