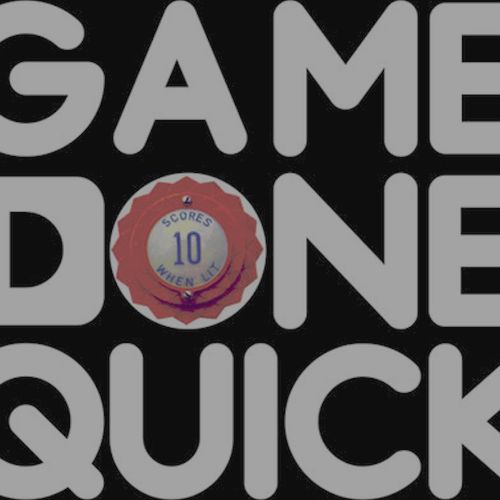 This January 3rd through 11th 2015 at the Hilton Washington Dulles Airport, a special event is happening in the world of gaming. Games Done Quick is a charity event wherein players attempt to achieve difficult gaming achievements using the shortest amount of time possible.

These players, also known as speedrunners, participate in a series of videogame marathons to raise money for charity. This special event happens twice per year, in the summer (Summer Games Done Quick) and in January (Awesome Games Done Quick). Over the past five years, these events have raised millions of dollars for charities such as Doctors Without Borders and the Prevent Cancer Foundation. These speedruns are streamed live over the Internet so that everyone has the opportunity to witness ultra-high level play while donating to worthy causes.

What makes this January’s event even more special is this is the first time that pinball machines will be included as part of the event. Thanks to the dedication of pinballers like pinballjoe, DMV Pinball and Replay FX, there will be a selection of pinball games available at Games Done Quick for speedrun challenges as well as for casual play.

How do you speedrun a pinball game?

Since you can’t really beat a pinball game, the closest equivalent is to reach or pass the game’s wizard mode. For example, what is the fastest time it has taken you to Rule the Universe on Attack from Mars, start Tour the Mansion on The Addams Family, or get to Portal on TRON:Legacy? Those are the types of goals pinballers will be going for during the pinball speedrun challenges that will be running all week.

As you can see, there will be games representing Stern, Jersey Jack, and Bally/Williams ready to challenge players to set fast wizard mode times. There are wizard modes ranging from easy (Tour the Mansion on The Addams Family) to longshots (Somewhere Over the Rainbow on Wizard of Oz/Valinor on Lord of the Rings). It will be interesting to see which of them can get taken down and what speedrun times we can post.

Here are some informal times I’ve done as practice for the event. I started the timer at the same time I pressed the start button on the game and stopped the timer as soon as I confirmed I had reached the goal.

Playing for speed toward a specific goal instead of for points is certainly a different experience. It was a level of flow play that felt like I was flying at the proverbial seat of my pants. All while still trying to get enough control to make successful, planned shots. I invite you all to try it and to beat my times. My time for “Rule the Universe” surely could have been better.

For more information on the event, the schedule and to see the live stream, go to the Games Done Quick official website. Also check out pinballjoe’s twitch channel here and here is the forum post on Speed Demos Archive. I am pleased that pinball will help play a part in raising money for these worthy charities. Huge thanks to Game Done Quick for allowing pinballers to participate in this January’s event.

The official week of scheduled speedruns will be from January 4th through the 10th, but there are bonus streaming days before and after these times. We hope to have pinball gameplay streaming for the entire week.

Pinball EDU: a non-profit organization created to explore the use of pinball as an educational tool and as a means for social and skill development for children and adults with disabilities.