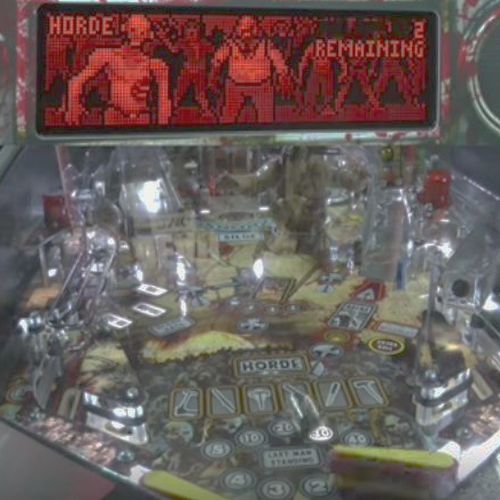 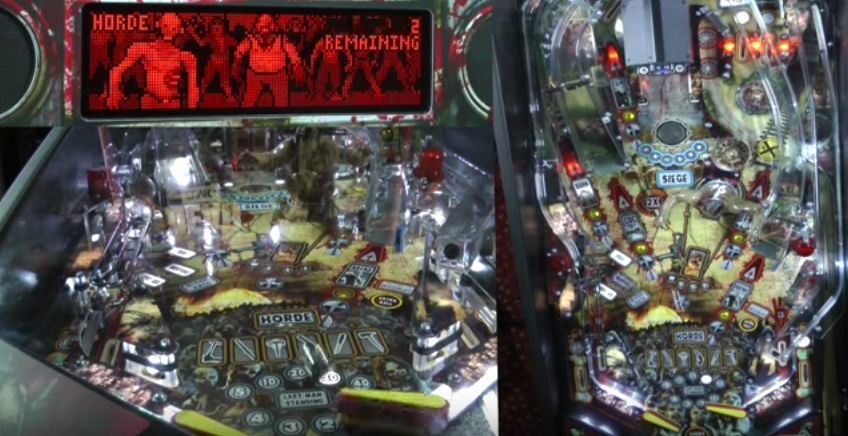 Bowen Kerins is going to help me to like this game.

Actually, that’s not right exactly. I do like The Walking Dead pinball game already. I really enjoy how solid the code is on it now. I also enjoy seeing other people play the game so I can see what’s going on as shots get made. However, even though the game is good and the code is deep, I rarely get to experience much of it myself when I play. So, it feels special when I finally get lucky enough to go deeper into the game.

There are three dice-roll areas in close proximity on this game. If you choose to go for the prison, the magnet might choose to end you straight away. Or maybe the magnet will not do anything, and the ball leaves more slowly straight down the middle.

If you choose to go for the Well Walker, good luck with that. It’s slanted in such a way to introduce the ball to the left outlane quickly and often if you try to graze it like Wolverine on the X-Men game. Hit it too solidly, and it’s straight down the middle time.

Each of these two dice-rolls has a coin flip nested inside of it. By that I mean each time you hit the prison and the walker, the shot might register, or it might not. Quite a few times I have been one shot away from Prison Multiball, and I’ve hit that zombie head thing solidly, only to have nothing happen except a trip to Drainland. Other times, I have been one hit away from Well Walker Multiball. I hit that Walker toy farther back than Optimus Prime on the Transformers pinball game, only to have nothing happen except death.

This happens so much that it’s a part of my thought process when I am thinking about which shot to go for next. For example, I’ve thought:

Hmm.. OK, I’ve got two shots left for prison Multiball, all my red arrows are gone. I have a ball trapped on the left flipper, and post passing causes the ball to fly out of control. I haven’t used a warning yet. I am going to go for the head-thing in the house. The shot may or may not work and I might be in big trouble. Be ready for whatever happens.

This was followed by a solid hit on the house, which registered. However the ball headed straight down the middle.

OH CRAP! SLAP SAVE NOW! (Warning … Warning… please don’t die, please don’t die.) OK, I’ve got one hit left on the Prison to start Multiball and the ball is on the left flipper again. I am going to sit here for at least a minute to wait for the the tilt bob to quiet down. OK, I am going to try for the Prison again. I hope the shot works. Be ready for whatever happens.

Then, there is the passive dice-roll area, the bumper exit. At any time, the ball can just drift out of there and go straight down the middle. The ball spends so much time in that area, you just have to be prepared for the pain that is coming. Will you nudge correctly? Will you choose to not nudge and hope that is the correct decision?

Defending against each of these chance zones is likely to cost you warnings. On the Walking Dead machines that I have played, each defensive move has cost at least one warning, most likely two warnings, or I’ve ended up tilting out. A bit tight on the tilt settings, maybe. But, that’s the lay of the land I suppose.

That’s what the Walking Dead pinball game means. You are a dead man walking. When you walk up to the game with your money, you are already dead. You are a zombie.

So imagine my envy at the lack of death and warning-less nudging that happens in the following tutorial video. We get to see a lot of the good stuff. Many Multi-Kill cash-ins, X-shot multipliers and even a couple of wizard modes. I chuckled a bit when it looked like Bowen needed over 300,000,000 zombies to complete the next Horde level. The game was just trying to show the score and the amount of zombies left at the same time, but it fixed itself.

So with all the deadly areas and painful drains lurking around every corner and around every shot in this game, what’s safe to go for? Well, nothing is safe really. Just try to get those drop targets, and hope you don’t get bit before the big points start to roll in for you.