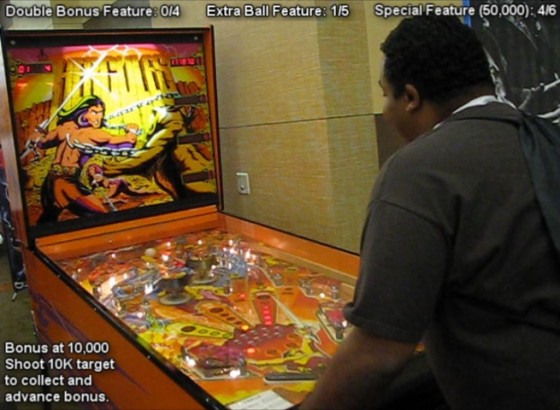 I finally had a chance to get an extended session with a fully-working Hercules at the 2012 Pinball Expo.

Usually, when I play Hercules, there is something that is not quite right. For instance: one of the logs that function as flippers might not be strong enough to propel the cue ball up the playfield. But, not this time. Everything on this game was working fine. So, I had the opportunity to see what kind of rule set the game has to offer.

The rule set isn’t quite as simple as the over-sized playfield looks. There are three main awards for you to collect: Double Bonus, Extra Ball and Special. Each of these features is started by travelling through the left, center or right upper lane, respectively. Each time you travel through these upper lanes, you advance further toward completing the feature.

When you have collected enough rollovers, the award will be available to collect via the right orbit. You have to shoot the right orbit completely around through the “Path of Victory” to collect the award. Just collecting more upper lane rollovers will not work. Also, shooting the Path of Victory will advance any features that have been started by one light each. You can collect each award once per ball.

I had quite a bit of fun with the game as you will see in the video. Thanks to Koi Morris for filming it. Fortunately, he was able to capture the moment when I turned it over. Note that the Special was configured to award 50,000 points. Also note my attempt to not be distracted by a rogue poster on the right side wall.

This game receives 3 stars for being more than just a novelty.