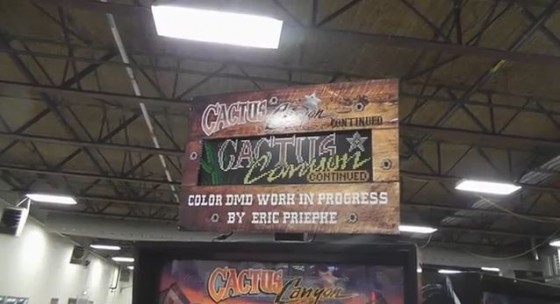 This year, the Allentown Pinfest event really did “step up its game”. Well enough that tournament players like myself made sure to take quality time away from qualifying to tour the facility and actually play some casual games.

At the 2013 Allentown Pinfest one of the new games on display was a P-Roc mod for Cactus Canyon called Cactus Canyon Continued. This new mod adds in a lot of features missing from the initial release of the game. There’s more modes including a Super Skill Shot, Drunk Multiball where the flippers are reversed, a Martians Vs. Cowboys mode and more. They even added in new high score options like the Undertaker which counts how many of the yellow stand up targets you hit in a game. Much like Attack From Mars.

Extra special thanks to the one and only Captain Kirk who you may remember from the 7th episode of the Arcade Hunters show who used to run Castle Video in New Jersey. Still one of the very best places to play pinball I have ever been to.

For more information on Cactus Canyon Continued please visit the link! Big thanks to Eric and everybody else for coming up with this great P-Roc Mod!

And now, a moment of silence for Castle Video, a place in northern NJ that had all of the best games in pristine, tournament-level condition. The picture below is but a subset of what Castle Video had to offer. 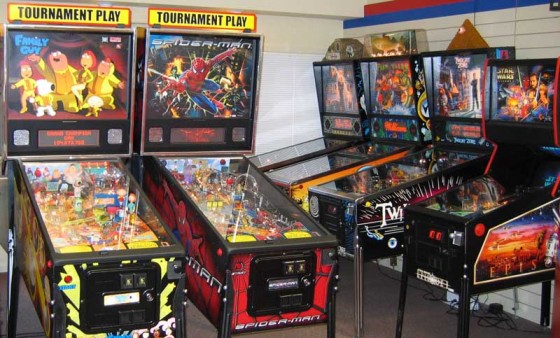 A look at Wizard of Oz, Predator by Skit-B Pinball and a tour of the flea market.

In this video we’ll take a ride to Allentown, PA and visit the 2013 Pinfest Pinball Show. We’ll do a tour of the entire event and also take a closer look at the new upcoming Wizard of Oz pinball machine by Jersey Jack Pinball and the Predator pinball machine by Skit-B. We’ll walk through the flea market and see pretty much all the show has to offer.

The Allentown Pinfest Pinball Show is held each spring in Allentown, PA.

Predator by Skit-B
with Nick from Arcade Hunters

This is a very early look at the new Predator pinball machine from Skit-B Pinball. Sadly none of the team members were available while I played this so I tried my best to figure things out. This game has been shown off before but at the 2013 Allentown Pinfest it was finally shown off with the playfield artwork!

As you can see they tried to make it look like a machine from the 1980’s The game has two sets of flipper buttons. If you press one of the other flippers the whole machine will turn blue and go into “Hunter Mode” where you have to try to hit a lit shot. Somehow I was able to make a combo shot to collect Dillon. (“You sonava’ bitch!”)

Big thanks to the guys from Skit-B for bringing the table to Pinfest and for letting us check out the game while it’s being fine tuned and worked on. It’s great to be able to play the game while in an early prototype form. I can’t wait to check it out when their finished!

For more, check out their web site. http://www.skitbpinball.com/index.html